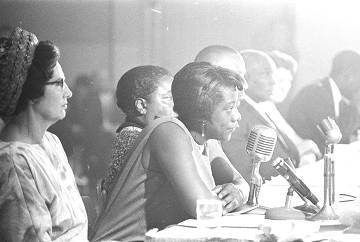 After Charlie Cobb and Ivanhoe Donaldson were chased at gunpoint out of Sharkey County into neighboring Issaquena County, the first Black person they encountered was Unita Blackwell standing outside of a small store she owned in the town of Mayersville, the county seat. She let them use her telephone, and she also introduced the two SNCC workers to Henry Sias, a small farmer and local NAACP leader.

Although Sias was a respected patriarch within the community, Unita Blackwell quickly emerged as the leader of the fledging Movement in Issaquena County, where no Black person was registered to vote.

She was been born into a sharecropping family in the Mississippi Delta during the Great Depression. Blackwell’s childhood was governed by “the plantation.” What that meant, she simply explained, “When the bossman says you go to the fields, everybody went to the fields; schools closed down.”

Resistance, however, was also part of her growing up. Her father refused to send her to the fields. He told the plantation owner, “this is his wife and baby, and wasn’t the plantation owner’s.” Nonetheless, after growing up, Blackwell worked as a farm laborer for most of her life, bouncing from place to place looking for better economic opportunities. She called these the “bleak years of trying to find out what to do.” However, by the 1960s, even sharecropping and tenant farming were in steep decline due to the mechanization of cotton harvesting.

At the time, SNCC voter registration projects were expanding throughout the Delta where the population was two-thirds Black. There and across the state, voting rights were systematically denied to Black people; only 3 percent of voting-age Black people were registered to vote. Unita Blackwell remembered that she hadn’t known that she could vote until she heard a SNCC organizer talk about it at a Sunday mass meeting. “He went on to describe to us that we had a right to register to vote … that the vote was the key.”

Blackwell was one of just eight people who volunteered to go down to the county courthouse and try to register to vote. “The more I heard about white people being so against it,” she thought, “the more I started thinking there must be something in this voting.” She failed the registration exam, despite being able to read and write. No one in that first group passed. Voter registration laws empowered voting registrars to fail anyone they chose to fail. “You didn’t pass those tests,” remembered Blackwell. 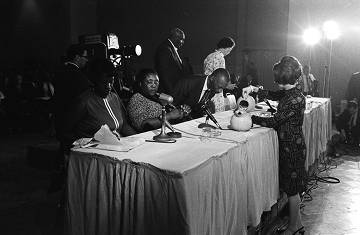 By 1964, Blackwell became a full-time SNCC field secretary, encouraging friends and neighbors to register to vote and leading groups to the courthouse. “This was a continuous thing … we was to continue to go out to get people to bring them in … to make sure we try to register to vote.” During the 1964 Freedom Summer, Blackwell was elected a member of the executive committee of the Mississippi Freedom Democratic Party and traveled to Atlantic City as a part of the MFDP delegation that also included Henry Sias, hoping to replace the white-only “regular” Mississippi delegation at the 1964 Democratic National Convention.

After the party failed to secure seats for its delegates, Blackwell returned home, and continued her efforts to change her own home county. On April 1, 1965, she filed suit against the Issaquena County Board of Education in protest of the school’s suspension of 300 students, including her son Jerry, for wearing Freedom pins. The case also called for school desegregation in Mississippi, following Brown v. the Board of Education, eventually reaching the U.S. Supreme Court, which upheld the ruling.

Blackwell went on to become Mayersville’s first African American and female mayor in 1976, a position she held for 25 years. In 1992, she was the recipient of the prestigious MacArthur Foundation’s “Genius” Grant. 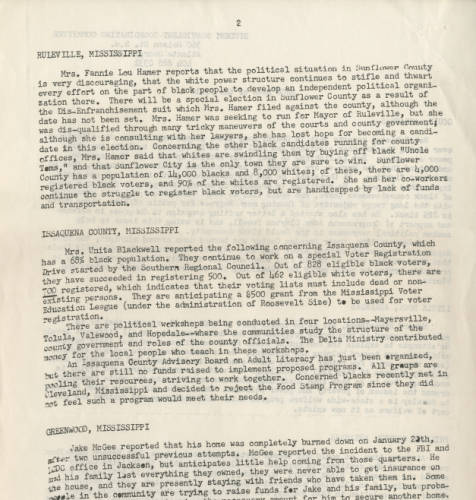 Click Here to View Document
“To Get that Power,” 1967, crmvet.org