When a federal judge forced Georgia to redraw its state legislative map, creating three new Black-majority districts in Atlanta, SNCC’s Ivanhoe Donaldson saw the new districts as an opportunity to develop political power in an urban area. He convinced Julian Bond, who lived in one of the new districts, to run for the state legislature and brought Charlie Cobb and Judy Richardson on board to run this electoral campaign. The SNCC veterans brought with them “a vision of a revolutionary democracy in which the people at the grassroots would be asked for once what they wanted.”

SNCC had already begun discussing organizing in urban environs. Jim Forman had recognized as early as 1963 that “SNCC is going to have to go into the poor sections of large cities to work,” and Atlanta’s new districts contained some of the most impoverished sections of the city. Although this represented new opportunity, Julian Bond’s campaign for state representative also illustrated the many hurdles that African Americans had to overcome in the wake of the Voting Rights Act. One of the biggest was that potential voters, long excluded from the political process, were not used to being asked to participate in it.

Bond’s approach to campaigning came straight from SNCC’s rural playbook. He spent weeks walking through in-town Atlanta neighborhoods asking voters what they wanted. “We tried to run on issues and not labels, on people’s concerns and not their prejudices,” he later told an interviewer. After listening to his future constituents, Bond’s campaign released a platform that focused heavily on economic issues but did not ignore moral and social concerns. The campaign demanded an increase in the Georgia minimum wage to $2 an hour, the end of “right to work laws,” streetlights and repaving heavily trafficked streets, and abolishing the death penalty.

Urban voters, the campaign quickly realized, “were just astounded because they had never had anybody ask them these questions. They had never elected a legislator from this district. It was an innovation for them as much as it was for me.”

The campaign generated much excitement. High voter turnout among many newly registered African American voters propelled Bond to an easy victory over his opponent, Dr. Howard Cresey, a lawyer backed by SCLC. At twenty-five, Bond became the youngest of eleven African Americans elected to the Georgia Legislature in 1965–the most since Reconstruction. Celebrations were short-lived, however. In January 1966 the Georgia House of Representatives voted to bar him from taking his seat on the basis of his association with SNCC and their opposition to the Vietnam War.

Cleveland Sellers, The River of No Return: The Autobiography of a Black Militant and the Life and Death of SNCC (Jackson: University Press of Mississippi, 1990). 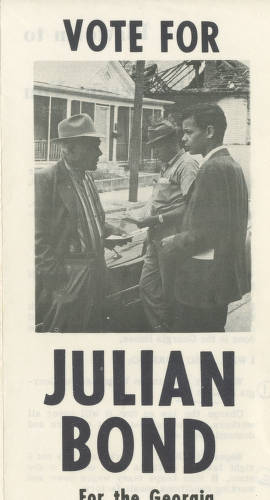 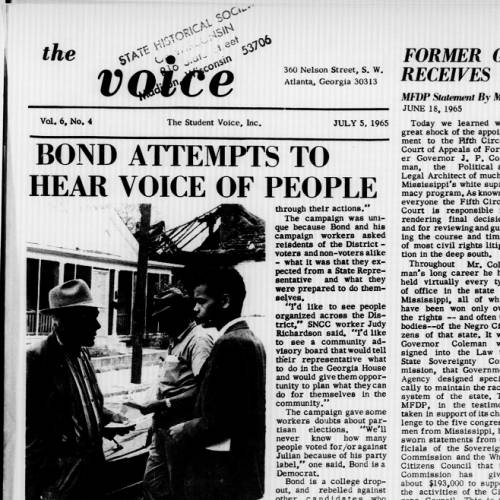