There had been freedom rides before the Freedom Rides of 1961. In July of 1946, Black World War II veteran, Wilson A. Head, decided to test the Supreme Court’s recent Morgan v. Virginia decision banning segregated seating in interstate travel. He boarded a Greyhound bus in Atlanta and began a trip to Washington, D.C. Along the way, Head met taunts and harassment. Police officers even pointed guns at his head in a police station in Chapel Hill, North Carolina. Nonetheless, he arrived in the nation’s capital physically unharmed.

Four years earlier, Bayard Rustin had made a similar journey when he boarded a bus in Louisville, Kentucky to travel to Nashville. He sat in the second row, and when the driver ordered him to move to the back of the bus, Rustin refused. He managed to get to Nashville still seated in the front, but there, after beating him, city police carried him to the police station. He continued to insist on his right to sit where he pleased. And he refused to be intimidated. Finally one policeman said to another officer, “I believe the nigger’s crazy!” and he was sent on his way. Bayard Rustin at news briefing on the Civil Rights March on Washington, 1963, Library of Congress Prints and Photographs Division

In 1947, Rustin was serving as treasurer of the Congress of Racial Equality (CORE), as well as the co-secretary of race relations for the Fellowship of Reconciliation (FOR), a pacifist human rights organization. Together, following Wilson Head’s ride, FOR and CORE decided to organize a larger, more confrontational test. Although court rulings were chipping away at Jim Crow, they felt that the right to desegregated travel needed on-the-ground assertion. The two groups organized the Journey of Reconciliation in an attempt to make the Morgan decision a reality.

The Journey was meticulously planned. Rustin and George House, a leader in both CORE and FOR, traveled the proposed Journey’s entire route, “adhering to Jim Crow restrictions,” in order to canvass the itinerary. They lined up lawyers, raised funds, contacted local leaders, and organized meetings. Thurgood Marshall of the NAACP Legal Defense Fund questioned the effectiveness of this direct action strategy, charging that it would lead to a “wholesale slaughter with no good achieved.” The Journey of Reconciliation deliberately included white participants so that “the inevitable violence [could] be reduced to a minimum.”

On April 9, 1947, the Journey of Reconciliation commenced on buses leaving Washington, D.C. An interracial group of eight white and eight black men, planned to visit fifteen cities in Virginia, North Carolina, Tennessee, and Kentucky. The group planned to speak about the Morgan case, “develop techniques for dealing creatively with possible conflict situations” and document any incidents that occurred because of their challenge to segregation laws.

As was the case with Marshall, some Blacks were dubious about the Journey. But when some Black middle-class leaders in Durham, North Carolina attempted to prevent a NAACP-organized mass meeting to support the riders, the majority of the Black community came together to demonstrate support for the Journey. “The meeting went on as scheduled, [and] the church packed with a mass of supporters.”

The group made twenty-six tests of segregated seating arrangements during their two-week Journey, and they were arrested on six of those attempts. In Chapel Hill, North Carolina, four of the riders were arrested, and a car of angry white men with sticks and rocks followed their car after they were released on bail. The Journey of Reconciliation created publicity, especially for the tactic of nonviolent direct action. Fifteen years later, in the wake of the students sit-ins, CORE would sponsor another round of Freedom Rides that garnered far more attention and created an impact that resonated throughout the South and across the country.

Click Here to View Document
Special edition of the CORE-lator on the Freedom Rides, May 1961, crmvet.org 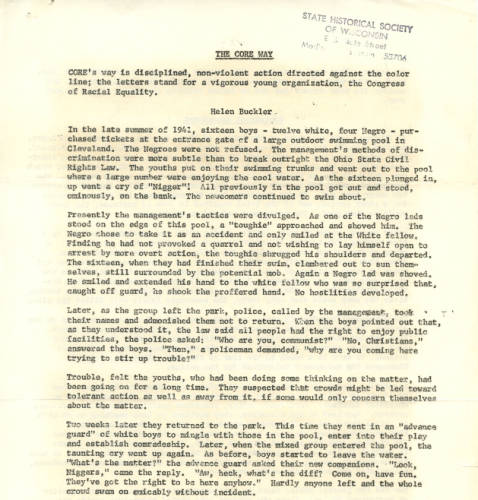 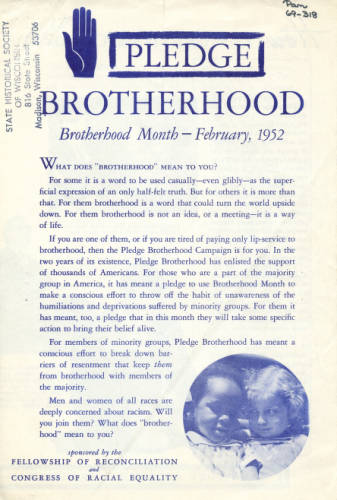 Pledge of Brotherhood by CORE and FOR, February 1952, CORE Records, WHS 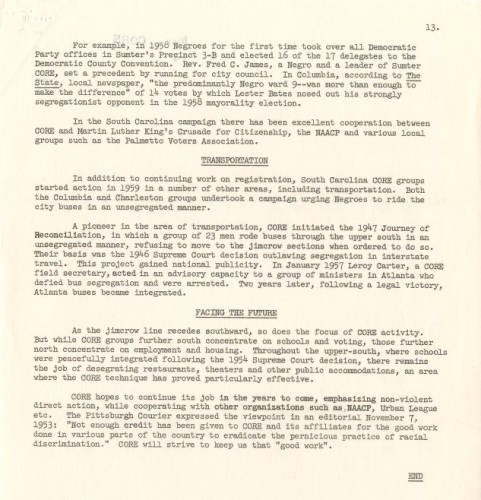