Bayard Rustin, a nonviolent activist for peace and integration, inspired critical debates within SNCC. “My activism did not spring from being black,” he explained, “Rather, it is rooted fundamentally in my Quaker upbringing and the values instilled in me by the grandparents who reared me.” Rustin fought against the system of racial inequality that undermined the “oneness of the human family.” As an openly-gay Black pacifist, discriminated against by American society, he had to fight against marginalization within various civil rights organizations as well.

Nonetheless, Rustin was important to the early development of SCLC, going to Montgomery, Alabama in February 1956 to instill in Martin Luther King Jr. a deeper understanding of of nonviolence as a way of life, as well as a political tool. He was close to Ella Baker and with her, co-founded In Friendship, a New York-based organization to support local southern leaders being battered by economic reprisal as they struggled against segregation and fought for voting rights.

Like Ella Baker, Rustin was attracted to the sit-in movement that erupted on February 1, 1960. He was especially influential with the Nonviolent Action Group (NAG) that formed at Howard University. Both Baker and Rustin provided “inestimable help” to the formation of SNCC in April 1960. Rustin emphasized the economic welfare of Black people. He asked, “What is the value of winning access to public accommodations for those who lack money to use them?”

NAG organized a series of campus debates in 1962 under the heading Project Awareness. The first of these was a debate between Rustin and Malcolm X, then a leader of the Nation of Islam. Rustin stood for a total commitment to nonviolence and integration of Black people into American political and economic systems, while Malcolm argued that nationalism would liberate Black America. Stokely Carmichael, then a Howard University student and NAG leader, claimed later, “It was from this point that it can be dated, when nationalism took its firm root and became dominant inside of the nonviolent action group.”

As Deputy Director, Rustin planned and organized the momentous 1963 March on Washington for Jobs and Freedom, which brought over 200,000 marchers to Washington, DC. Some leaders feared that a publicly-gay leader might undermine the political effectiveness of the march. But SNCC chairman John Lewis knew that “this was going to be a massive undertaking, and there was no one more able to pull it together than Bayard Rustin. The consensus was that he be involved.” Following the march, Rustin achieved national fame for the first time. The month after the march, he appeared with A. Phillip Randolph on the cover of Time Magazine, which reported “for all the dissension that has split Negro organizations, the march was an astonishingly well-executed product of leadership.” At the 1964 Democratic Convention, Rustin fell out with SNCC and the Mississippi Freedom Democratic Party (MFDP). Although he wanted the MFDP delegation seated, he felt the compromise of two at-large seats offered by Democratic Party leaders was a victory. Rustin urged the group to take the small concession. At a heated meeting at Union Baptist Church, Rustin said, “When you enter the arena of politics, you’ve entered the arena of compromise.” His position put a lasting wedge between him and MFDP members and SNCC activists.

Rustin campaigned for Johnson’s reelection, further isolating himself from SNCC’s critical stance on the white-majority Democratic Party. He greatly feared a Goldwater presidency and sought a moratorium on civil rights demonstrations until the election. SNCC and CORE refused, reminding him that he was going against his own activist history.

In a February 1965 article in Commentary magazine, “From Protest to Politics,” Rustin challenged SNCC’s growing alienation from the liberal establishment, especially the Democratic Party. He stood by a political strategy of integration into existing parties. Rustin’s political tension with the young activists whom he had been so influential was one of the early signs of the splintering of consensus on the priorities of the Movement. 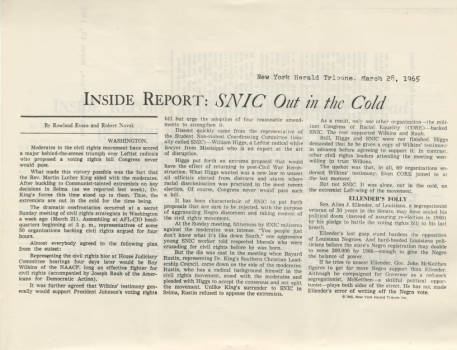 Click Here to View Document
Bayard Rustin, “From Protest to Politics: The Future of the Civil Rights Movement,” League for Industrial Democracy, [1965], crmvet.org