Louis Allen ran a small timber business in Liberty, Mississippi, the county seat of Amite County, a county notorious as a Ku Klux Klan stronghold. A World War II veteran with a seventh-grade education, he was also a landowner. SNCC was active in the county, but Allen did not attempt to register to vote or become involved in the Movement. Allen’s life changed on the morning of September 25, 1961, when he witnessed the murder of NAACP leader and SNCC supporter Herbert Lee by Eugene Hurst, a state legislator.

Allen watched as Hurst aimed his pistol at Lee–who stood with empty hands and an unlit cigarette in his mouth–after limited verbal exchange. But witness or not, Allen was pressured by local law enforcement officials to lie about what had happened. He testified that he had seen Lee holding a tire iron with the intention of hitting Representative Hurst. A piece of iron was “found” under Lee’s body by the same authorities that had coerced Allen. The coroner’s jury exonerated Hurst the next day.

But Allen was uncomfortable with his untruth. “I did not want to tell no story about the dead, because you can’t ask the dead for forgiveness,” he told SNCC organizer Bob Moses. He decided to tell the truth at the grand jury hearing that would examine the coroner jury’s findings. And that meant putting his life on the line.

Moses arranged for Allen to meet with Justice Department officials, but when no protection was offered, Allen decided not to testify. It was too late, however; officials in Liberty had already been informed that Allen was willing to testify.

In 1962, Allen filed an affidavit detailing some of these incidents. He described one particular encounter in which Deputy Jones struck his face with a flashlight, breaking his jaw. “They [the police] have someone out to my house ‘watching’ me all the time,” Allen wrote. He pled for help, asking that “this matter… be investigated at once because if not, this kind of intimidation will continue.”

The harassment continued. He wanted to leave the county but outstanding debts and a sick mother kept him there. After his mother passed away, however, Allen made plans to leave.

On January 31, 1964, the night before his planned departure, Allen’s teenage son found his father’s dead body lying in the driveway. The entire left side of his face had been blown off. Deputy Jones, the same man who had threatened Allen’s life on numerous occasions, was made the lead investigator of the case. Officially, the murder remains unsolved today.

When news of Allen’s murder reached a COFO staff meeting in Hattiesburg, Mississippi the following morning, the group was deep in debate about a potential summer project in Mississippi. Moses had kept out of much of the argument. But now, visibly affected by Allen’s murder, he asserted himself, undoubtedly swinging favorable staff support for the project which would later be known as the Mississippi Freedom Summer Project. “It became clear that we had to do something.”

Charles Payne, I’ve Got the Light of Freedom: The Organizing Tradition and the Mississippi Freedom Struggle (Berkeley: University of California Press, 1995), 121-123, 299. 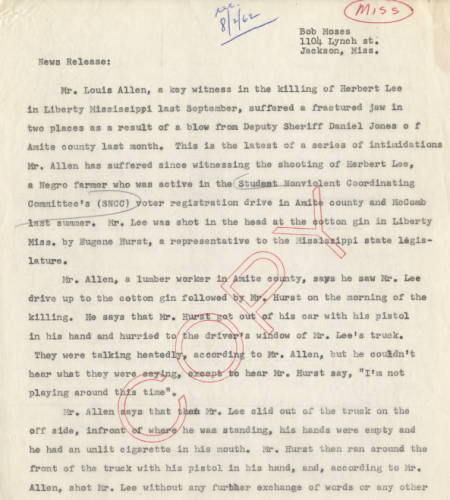 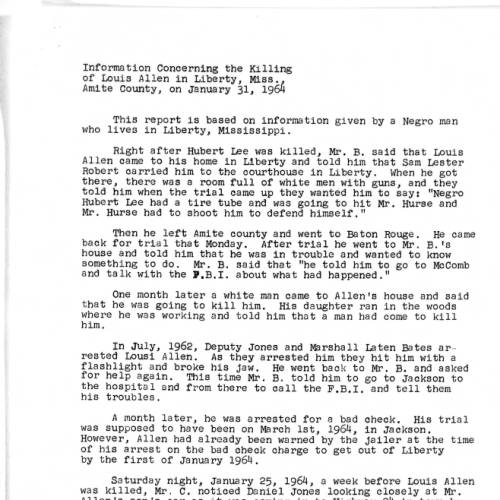 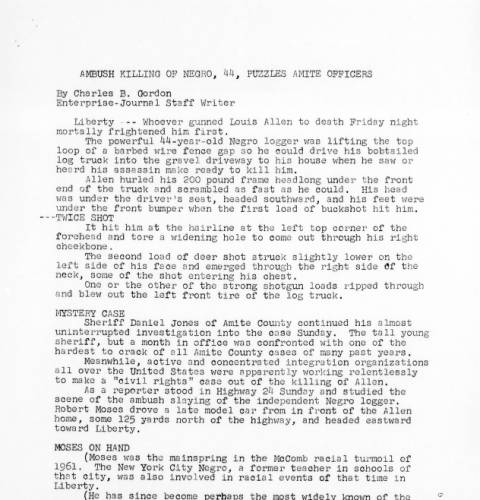 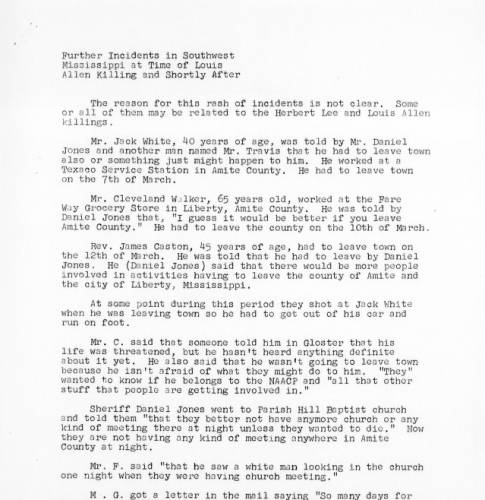 Further Incidents in Southwest Mississippi at the Time of Louis Allen’s Killing and Shortly After, 1964, Lucile Montgomery Papers, WHS