Even with the victories of the 1964 Civil Rights Act and the 1965 Voting Rights Act, SNCC workers and their allies confronted new challenges in the late 1960s. “I feel that the federal government have proven that it don’t care about poor people,” Mrs. Unita Blackwell from Issaquena County, Mississippi explained. “We the poor people of Mississippi is tired.” So those in the Movement began searching for new ways and strategies to tackle the economic inequality that remained in places like the Mississippi Delta and Alabama Black Belt.

Demands for “Black Power” found fertile ground as rural Black people increasingly demanded self-sufficiency. SNCC worker Jesse Morris was at the forefront of this effort. Morris thought that the only jobs poor people could depend on with certainty were ones created by and for themselves. Along with Silas Norman, SNCC’s Alabama State Director, Morris came up with the idea of a Poor People’s Corporation (PPC), which they first formed in the fall of 1965. SNCC staffer Willie Blue who began working with PPC put the organization’s rationale this way: “There are thousands of black people all over Mississippi who can’t get jobs, and who don’t like being on welfare. The idea behind PPC is to have them earn their daily bread with their own ingenuity.”

The PPC was a non-profit corporation that provided financial and technical support to groups of poor people who wanted to start cooperatives or other self-help programs. It was designed “to assist low-income groups to initiate and sustain self-help projects of a cooperative nature.” After reading an article about the Poor People’s Corporation in The Student Voice, Mrs. Maggie Chandler, who made handcrafted hats, inquired about starting a chapter in Greenwood, Mississippi. She supported two children on her low-income assistance of $15 per week and was “willing to do all I can to have this organization here,” she wrote.

The Poor People’s Corporation was open to all poor people, charging nominal dues of 25 cents a year. With an annual fund of $5000, the PPC loaned money, provided training, and set up a marketing network for small groups from Mississippi who primarily did sewing and leatherwork. Within a year there were sixteen “self-employment enterprises” underway in ten counties, and “Liberty House” outlet stores opened in Jackson, Mississippi and in New York City.

While empowering for those involved, the PPC and other cooperatives could not begin to solve the overwhelming and deeply-rooted problems of Black unemployment and poverty. The Poor People’s Corporation faced countless challenges in training workers, supplying materials and machinery to the cooperatives, and marketing finished products. The small organization also did not have the capital necessary to sustain these enterprises over a long period of time. Local banks refused to extend credit, adding to the burden of staying afloat. The PPC was forced to rely on small contributions from civil rights supporters, and in the 1970s that disappeared.

But cooperative organizer Doug Jenkins pointed to the important victory of the Poor People’s Corporation; despite its inability to maintain a lasting presence, “PPC is black power–it’s showing people how to do something for themselves.”

Doris A. Derby, “Sometimes in the Ground Troops, Sometimes in the Leadership,” Hands on the Freedom Plow: Personal Accounts by Women in SNCC edited by Faith Holsaert, et al. (Urbana: University of Illinois Press, 2010), 436-445. 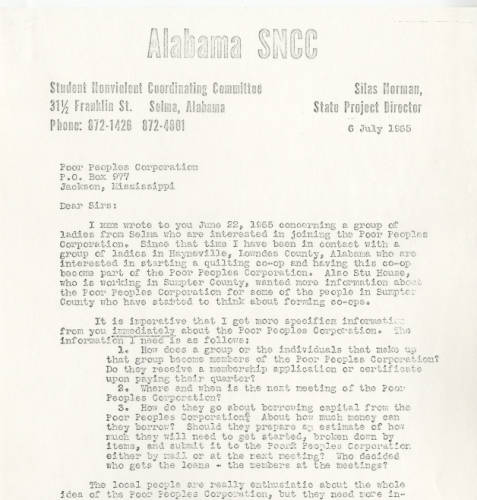 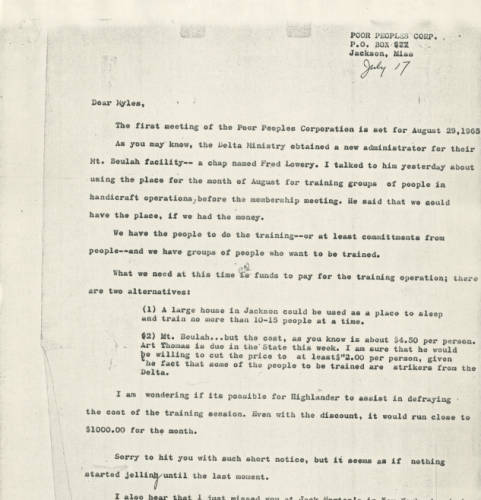 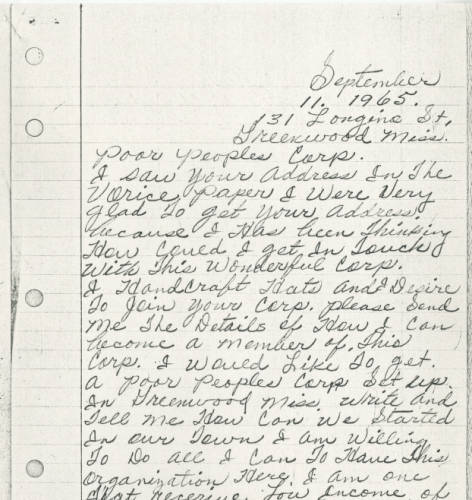