When SNCC’s Courtland Cox asked, “Why complain about police brutality when you can be the sheriff yourself?” he struck a nerve with the Black residents of Lowndes County. His question concretely framed what they had increasingly been thinking about since the Selma to Montgomery march. As John Hulett, the head of the Lowndes County Christian Movement for Human Rights (LCCMHR), put it, they were sick of having to duck “like a deer” whenever the sheriff’s car rolled by.

SNCC had arrived in Lowndes County shortly after the march and began working closely with LCCMHR to register Black county residents. By October, 2,000 qualified Black residents were registered, and SNCC suggested that they consider forming an independent political party. After careful deliberation, local people decided to give it a try. “We felt that if it was anyway possible for us to do anything, we would have to form our own party,” explained Matthew Jackson, Sr. one of the leaders of a new political organization they formed, the Lowndes County Freedom Organization (LCFO). Because of Alabama’s high rate of illiteracy, the law required that a political party have a visual symbol. A snarling black panther was chosen as their political emblem. 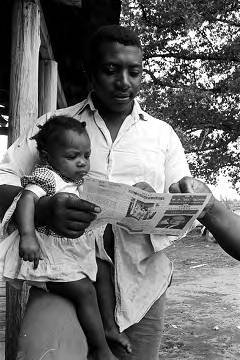 Local activists and SNCC organizers spent the next year preparing for the November elections, when a number of county positions would open up. SNCC’s research department, led by Jack Minnis, immediately prepared a political education program on the county government. Minnis held a series of workshops in Atlanta for Lowndes County residents. “The purpose of the workshops,” he explained, “was to help the Lowndes County people learn everything they needed to know about the political laws of Alabama as they applied to county government.” They spent time outlining the process of creating an independent political party and how to legally conduct an election.

SNCC field organizers also created comic books to teach local politics. SNCC’s Bob Mants remembered, “Our idea was to find a medium in which we could communicate a political message with our constituents. The South is known for its storytelling, so we thought the best way to do that was to create a comic book using idioms and folk expressions that they were familiar with.” The comic books illustrated the powers of county positions, including the sheriff, the coroner, the tax collector, and the school board. 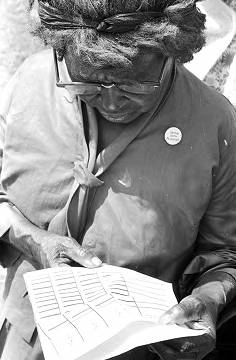 A photograph of a woman looking at a sample ballot while standing in line to vote, November 1966, Jim Peppler Southern Courier Collection, ADAH

This political education program resulted in a radical change of attitude among Lowndes County Black people as they realized with increasing clarity that they could take control over their own lives and that the instruments of government were tools whose use could be learned. For decades these people had been told and taught, often with the use of force and violence, that politics was “the white man’s business;” that they were unqualified for political office because they were poor and Black. But, according to Stokely Carmichael, “with the political education workshops, their confidence grew.” And by elections in November 1966, Black voters outnumbered white voters. They were ready to take power in their own hands.

Click Here to View Document
LCFO’s comic book for board of education, 1966, crmvet.org