By the late 1960s, a number of SNCC organizers had moved onto other projects and campaigns, and many of them ended up in Washington, D.C. There, Marion Barry was organizing the Free D.C. campaign, fighting for home rule and self-determination in the nation’s capital. Meanwhile, students at Howard University were pushing the administration on what it meant to be a Black University. This led to the influential Toward a Black University Conference in November 1968 and a student takeover of Howard’s administration building later that academic year.

When Howard student Geri Stark (Augusto) was growing up in Dayton, Ohio, her parents–dedicated organizers themselves–would bring African students from local HBCUs to their home for the holidays. They had also opened their home to SNCC organizers who needed a break from the unceasing pressures and dangers of organizing in the rural South. So when Augusto enrolled at Howard University in 1966, she threw herself into the organizing around Black Power happening on campus and connected with the SNCC organizers who had recently founded two Pan-African focused institutions in the nearby neighborhood.

Geri Augusto “Toward a Black University”

Press Release for the Struggle for Black Education,

In 1968, Courtland Cox, Charlie Cobb, and other SNCC organizers opened Drum & Spear Bookstore at 14th and U Streets, the heart of where riots had broken out after Martin Luther King Jr.’s assassination. Not long after, they opened the Center for Black Education. The driving mission of these overlapping institutions was to build both Black and international consciousness in the surrounding community.

For Geri Augusto, the books on the shelves of Drum & Spear offered a totally different education than the one she was receiving as a Howard student.

You could walk into Drum & Spear Bookstore, which many people did from right off the street, and you could read yourself into an international consciousness. – Geri Augusto

Jennifer Lawson, who had illustrated SNCC’s political education material in Lowndes County, Alabama, became the de facto art director for Drum & Spear Press, which grew out of the bookstore. She helped conceptualize a children’s book called Children of Africa. Although designed as a coloring book, it sought to inform people about Africa and broaden their understanding of the world.

While running Drum and Spear Bookstore, SNCC organizers in Washington, D.C. like Courtland Cox, Charlie Cobb, and Jimmy Garret, were also teaching at Federal City College, attempting to develop a Black education program. In 1969, they concluded that they could not do this at a federally-funded institution, and they opened the Center for Black Education to teach local Black people technical skills and a Pan-African understanding of the world. 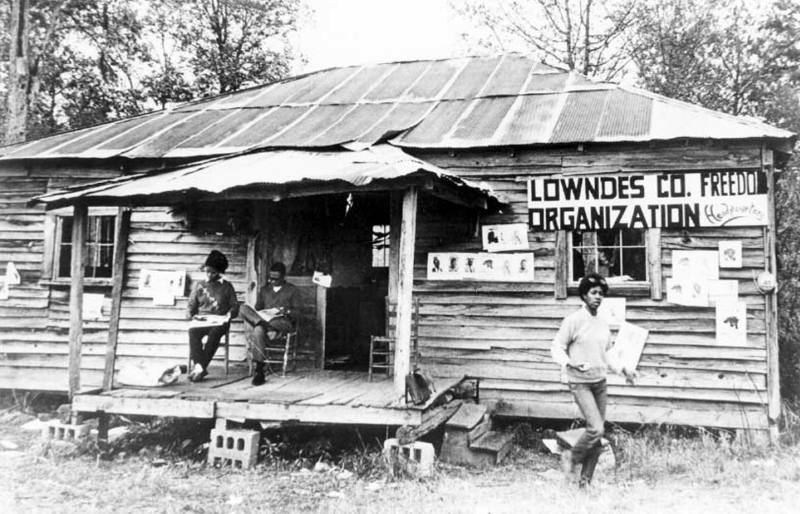 We were moving up out of the Lowndes County experience and discussion about what would it take for us to exist in a real way. … We were searching for a way to have self-sufficiency as an alternative to what we viewed … was that the denial of our existence. – Courtland Cox

The Center for Black Education was looking for a way to turn Black people everywhere into independent people and help them build independent communities. Cox, Cobb, Augusto, and others didn’t come to this idea solely on their own. They were mentored by the Trinidadian-born historian, political activist, and Pan-Africanist thinker, C.L.R. James, who was teaching at Federal City College and began giving weekly lectures at the Center.

In many ways, the work of the Center for Black Education and Drum & Spear Bookstore was one in the same, ultimately fostering knowledgeable, trained people who could support African independence projects as well as support Black communities in the United States. Between these two institutions, people bought books, exchanged ideas, learned skills, and began building community, both locally and across the African diaspora.

Reading, writing, and the movement of ideas were central to the education taking place at 14th and U Street. Besides the Drum and Spear Press, the bookstore also sponsored a radio program for general audiences and Sa Yaa Watoto for children. Meanwhile, Geri Augusto worked in the communication sector of the Center for Black Education, where they built a Pan-African library and clippings file and put out a publication called The Pan-African. Publications like these traveled far and wide across the African diaspora.

Geri Augusto “Publications and The Pan-African“

The Institute of the Black World down in Atlanta was doing similar work to the Center for Black Education, and its efforts directly impacted the organizing that Tony Bogues was doing in Jamaica.

Not everybody is traveling…but the books, the publications, and the newspapers that Black people did–radical Black organizations–no matter how small…the newspapers could carry and travel. – Geri Augusto

As ideas circulated locally in Washington D.C. and across the world, the former SNCC staffers at Drum & Spear Bookstore and the Center for Black Education began developing a deeper understanding of Pan-Africanism that went beyond Black Power. “We began to define ourselves in ways that did not allow other people to define us,” Courtland Cox explained. “Black is Beautiful,” and “We Are an African People,” were two statements at the core of this thinking.

Courtland Cox “We Are an African People”