In 1966, Alice Moore, a 42-year-old wife, mother, and educator, became a political trailblazer when she ran as tax assessor for the Lowndes County Freedom Organization (LCFO), an independent Black political party in Lowndes County, Alabama. 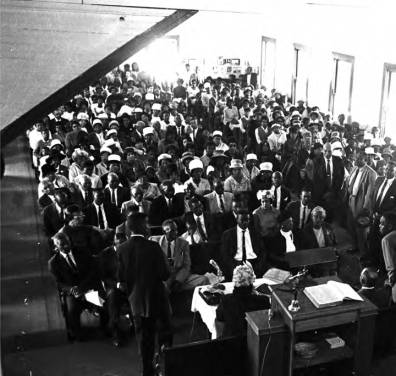 A year earlier, Stokely Carmichael and SNCC workers began organizing in Lowndes County with an invitation from local leader, John Hulett, to help with voting registration efforts that were underway. SNCC proposed that Black residents, already a majority of the population, form their own political organization in an attempt take control of the local government and their own lives. Out of this grew the LCFO.

Alice Moore was present at the party’s inception at Mt. Moriah Baptist Church on April 2, 1966. Two weeks later, she volunteered to be LCFO’s nominee for tax assessor. Her background was similar to her fellow LCFO candidates: a typical working-class person with some education, affiliation with a local church, and a history of civil rights engagement.

SNCC organizers played an important role in helping candidates and Lowndes County residents understand the responsibilities of each office. In particular, they focused their attention on changes that could be brought about when Blacks had control of county taxes.

“My platform is tax the rich to feed the poor,” declared Moore in her brief campaign speech. She then took her seat, and the crowd erupted with applause. Moore was the spotlight of LCFO mass meetings. Her words highlighted how Black Power promised a radically-different politics that targeted the needs of the Black poor who formed a majority but had been excluded from county politics for far too long.

“Once we’ve got Black Power, we’ve got something going,” Moore once said at a mass meeting. She vowed that if elected tax assessor, she would finally tend to the dilapidated conditions of schools and Black neighborhoods.

During Lowndes County’s November 1966 election Moore received 1606 votes. Though she and the other LCFO candidates still lost the election, Moore was grateful for every vote she received. News across the nation spread, “Lowndes County: Candidates Lose but Black Panthers Strong.” In the face of white voter fraud, intimidation tactics, and threats of firing, hundreds of people came to support the vision of Moore and the LCFO.

Following the election, the LCFO immediately put its efforts towards correcting the injustices that took place during the election that year. Moore continued her work with civil rights in Lowndes County and served as principal of the Adult Basic Education School until the 1970s.