When SNCC arrived in McComb, Brenda Travis had already made up her mind that she needed to do something–anything–to change the unjust world she lived in. As a ten-year-old, she watched the county sheriff burst into her home and arrest her thirteen-year-old brother for an unknown reason. She had seen the photograph of Emmett Till’s battered, bloated body in the September 15, 1955 issue of Jet magazine. So, when SNCC came to town in 1961, the 15-year-old Travis saw a way to fight so many of the things that angered her. Soon she was at the forefront of the McComb student movement.

C.C. Bryant, chair of the local NAACP, had invited SNCC’s Bob Moses to start a voter registration project in McComb. But other SNCC activists from the organization’s direct action wing also came along as well. They reached out to local youth like Brenda Travis, who was attracted to the nonviolent student organization they helped set up. She joined the training for nonviolent protest.

With the involvement of young people like Travis–who were too young to vote–plans for direct action protest took off. After Hollis Watkins and Curtis Hayes were arrested for sitting in at Woolworth’s, SNCC staff asked for volunteers at a mass meeting to keep the momentum going. “I knew that I could not sit still and be silent,” Travis remembered, “So I volunteered to go to jail.” Travis, along with fellow students Robert Talbert and Ike Lewis, sat in at the Greyhound Bus Station and were arrested. During their month-long stay in the Pike County jail, the young people remembered the tactics that SNCC organizers had taught them, praying and singing freedom songs to lift their spirits.

After her release, Brenda Travis learned that she had been expelled from school. News spread, and over one hundred of her classmates walked out of school in protest of her expulsion. The students marched from Burglund High School to McComb city hall, stopping at the SNCC headquarters on the way. SNCC staff members Bob Moses, Chuck McDew, and Bob Zellner had come to McComb to work on voter registration and didn’t expect to see a band of kids marching down the street. But they joined and were subsequently arrested for “contributing to the delinquency of minors.” During this protest, a police officer yanked Travis off the steps of city hall and arrested her again. Without going before a judge, she was sent to a youth correctional facility.

“When I was placed in reformatory school,” Travis recalled, “nobody knew where I was, not even my attorney.” Back in McComb, Travis’ mother faced retaliation because of her daughter’s civil rights activities. Local whites repeatedly refused her work and eventually pushed her to leave her young children with relatives while she looked for work in other parts of Mississippi. Travis was eventually released into the custody of a professor from Talledega College, but then fled with the help of James and Mildred Forman after he was abusive. Others from SNCC, like Julian Bond and Ms. Baker, helped ensure that Travis was cared for and received an education.

“My displacement began from the first day that I was arrested,” Brenda Travis later recalled, “because it was from that point […] that I was taken from my family.” She was forced to leave her community for her involvement in the Movement, but Travis’ sacrifice planted seeds of resistance in McComb. Reflecting on her activist work in McComb, she said, “I don’t consider myself a leader. I consider myself a person who follows their own convictions, and that’s what I did.” 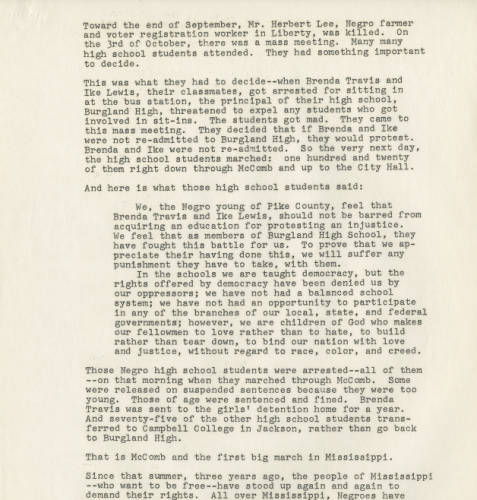