Lillian McGill’s role as secretary of the Lowndes County Christian Movement for Human Rights (LCCMHR) extended far beyond note taking and correspondence. LCCMHR chairperson, John Hulett, called her “the brains of the movement.” She took care of finances, traveled far and wide raising funds for the organization, delivered powerful speeches at mass meetings, shaped decisions of the executive committee, and religiously canvassed every day of the week.

Lillian McGill was the daughter of Elzie Lee McGill, an independent farmer who owned two hundred acres of land in White Hall and also worked at the Western Alabama Railroad. McGill graduated from Alabama State University and settled in Montgomery with her then husband. Employed as a domestic worker, she took an active role in the 1955-1956 bus boycott, walking to work and attending mass meetings. She returned to White Hall after her mother’s death in 1964, as a single-mother, separated from her husband, with three small children.

On March 19, 1965, McGill volunteered to take notes at the inaugural meeting of the Lowndes County Christian Movement for Human Rights and by the evening’s end, was elected as secretary of the new organization. Her father, meanwhile, served as treasurer. The LCCMHR was a forerunner to the Lowndes County Freedom Organization (LCFO) that became widely known as the Black Panther Party that took shape when SNCC began organizing in Lowndes County.

When SNCC began working in the county, McGill quit her part-time clerical job with the Department of Agriculture and joined them going from door-to-door recruiting people for the Movement seven days a week. The well-being of all Black people mattered to her. “It was the thing that would improve the conditions for most of the people and not leave one or two people comfortable while everybody else suffered,” she explained of her movement work.

McGill seems to have been born a tough community organizer. Beyond organizing for LCCMHR, she was on the front lines of bringing government programs to Lowndes County. She, John Hulett, and Frank Miles, Jr. petitioned Sargent Shriver–head of the War on Poverty’s Office of Economic Opportunity–to bring a community action program to Lowndes in August of 1965. “We cannot afford to await the initiative of others,” they wrote. “We want to and must help ourselves by acting now.”

Within her own family, she filed a transfer request for her son to attend the all-white Hayneville High School. John Hulett did the same. On the first day of school in August 1965, Mrs. McGill carried the gun she brought with her while canvassing as she and the other mothers escorted their children to school.

As SNCC workers and Lowndes activists worked to form an independent political organization In the lead-up to the November 1966 election, they realized that key county positions, such as superintendent and probate judge, were not then up for election. It was Lillian McGill who lent her name to a lawsuit, McGill v. Ryals, filed against the county sheriff for the exclusion of African Americans in the local government and violation of the Fourteenth and Fifteenth Amendments. “When we speak of ‘power,’ we mean we are going to have a voice in the future affairs of our country,” Mrs. McGill explained. “We want Lowndes County to be a place where the lives of the people will no longer be determined by the white power structure, but by the people themselves.” From education to economics to political power, the Freedom Movement in Lowndes County stood on Lillian McGill’s shoulders.

Susan Youngblood Ashmore, Carry It On: The War on Poverty and the Civil Rights Movement in Alabama, 1964 – 1972 (Athens: University of Georgia Press, 2008). 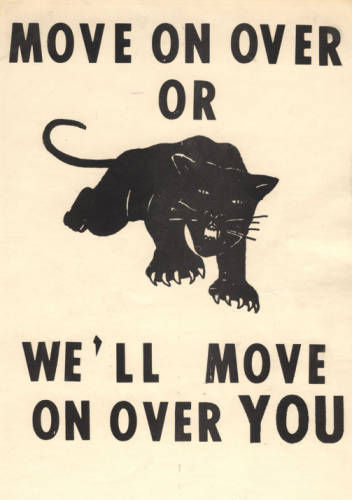 Poster from Lowndes County, “Move on Over or We’ll Move on Over You,” Alabama Photographs and Pictures Collection, ADAH 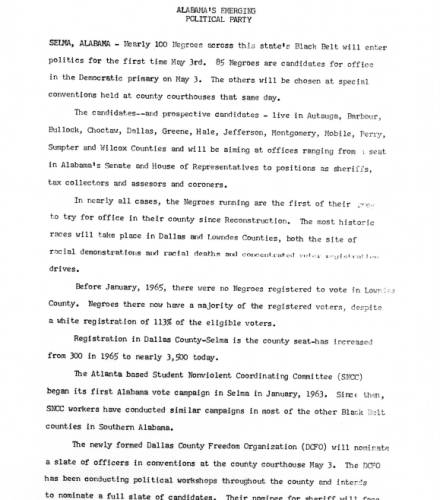