Muriel Tillinghast, with her words, actions, and presence, was a teacher. Soon after arriving in Mississippi as a volunteer for the 1964 Summer Project, she joined Bob Wright and Louis Grant–two other volunteers–in Mayersville, the tiny county seat of Issaquena County. There, the young Howard University student organized a Freedom School that brought members of the community together to talk about African American history, the contributions of Black leaders, and the power of poetry and song. “For someone so young and petite, she had a serene strength about her,” said local leader Unita Blackwell, “Muriel Tillinghast truly gave me the education of my life.”

On Howard’s campus, Tillinghast had been president of NAG, the Non-violent Action Group, so she was well-versed in methods of organizing by the time she joined SNCC. “We were looking for people we knew were potential leaders,” said Charlie Cobb, “and there was something special about her.” In the summer of 1964, Tillinghast headed the Washington, Issaquena, and Sharkey projects before assuming Cobb’s position as the Greenville project director and later acting as the head of COFO’s statewide operations in Mississippi.

Blue, cotton handkerchief tied around her hair, Tillinghast often caught the eye of local Mississippians: “She walked different than we did. Wasn’t no fear we could see … We had never quite seen anybody this unafraid and yet she also recognized, now that I look back on it, the danger that she was in,” recalled Unita Blackwell. She was strong in her convictions and proud of her identity, being one of the first women at Howard, and later in the Delta, to wear her hair natural. “Movement has to do with how one sees oneself within the world – what one can do to make the world a better place – and to actually try to do no harm,” said Tillinghast.

After her involvement with SNCC, Tillinghast continued to remain involved in activism. She worked relentlessly on issues of tenant rights, prison education, medical experimentation, and immigration. In 1996, she was the New York Green Party candidate for Vice President.

“The movement continues in every aspect of life. I have carried my understanding of its principles to the classroom, to work, and to the prisons and jails in my daily walk through life. It is as vital to me as the air I breathe.”

Muriel Tillinghast, “Depending on Ourselves,” Hands on the Freedom Plow: Personal Accounts by Women in SNCC, edited by Faith S. Holsaert, et al. (Urbana: University of Illinois, 2010), 250-256. 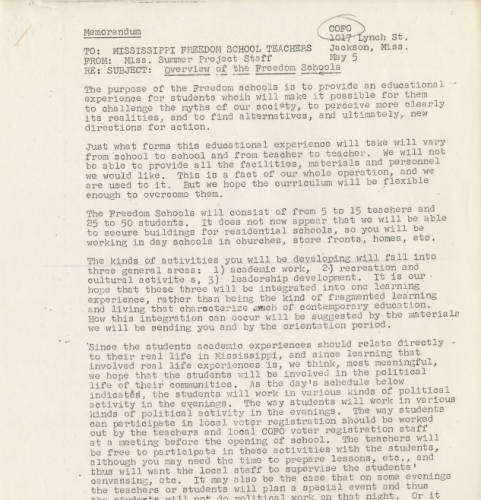