In 1963 Willie McCray (known simply as “McCray”) was swept up in the energy and excitement of the Albany Movement. After he and his cousin were arrested for demonstrating downtown–a badge of honor in the Movement–he joined SNCC’s staff full-time and relocated to the organization’s national office in Atlanta.

Charles Sherrod and Cordell Reagon had come to Albany two years earlier intending to use the metropolitan hub of Southwest Georgia to spark a region-wide voter registration drive. The SNCC organizers hooked up with students at Albany State, the local Black college, and other Black civic and religious leaders to form the Albany Movement as an umbrella organization to channel energy in the local freedom struggle. For the next few years, the Albany Movement “aroused the emotions of the people and whetted their desire for freedom,” recalled local leader Slater King. Meanwhile, SNCC’s national office in Atlanta was growing to keep up with the organization’s expanding field projects. McCray was a trained mechanic, a skill executive secretary James Forman considered vital, and he brought him into the headquarters’ operations. 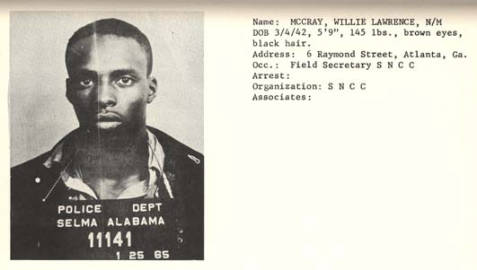 McCray’s initial task was to oversee SNCC’s coveted fleet of cars, which was instrumental to SNCC’s field projects. He also worked closely under Forman and Ruby Doris Smith–SNCC’s main administrators–to make sure a range of things got done. As Larry Rubin recalled, McCray “was James Forman’s get-it-done guy … He did what was necessary to make sure SNCC’s work happened.”

And it was often unglamorous. One of McCray’s early SNCC jobs was to drive a load of books from Cape Cod to the freedom center in Holly Springs, Mississippi. Yet McCray carried out his mundane duty with an enthusiasm that was contagious, “helping leaders recover their spirits so they could continue to lead, and helping organizers overcome their fears so the could help others overcome theirs,” Larry Rubin remembered.

McCray’s work in SNCC took him everywhere. In early 1965, he joined the voting rights campaign in Selma, Alabama, where SNCC organizers were working hand-in-hand with local activists and Dr. King’s SCLC to gain voting rights. He was arrested multiple times; one time on the courthouse steps while Sheriff Jim Clark viciously beat a local woman he accompanied to register to vote. Later that year, he relocated to SNCC’s office in New York. There, he and several other SNCC workers held a “chain-in” at the New York federal building in July 1965 “to dramatize the plight of 1000 Negroes and white sympathizers who been jailed and beaten in Jackson Mississippi protesting a meeting of the all-white State Legislature.”

While in New York, McCray met Helen O’Neal, a fellow SNCC activist from Clarksdale, Mississippi. They married and moved to Ohio, where McCray worked as the security chief at the National Afro American Museum and Cultural Center in Wilberforce. “McCray’s enthusiasm for the Movement and Movement workers lasted his whole life,” Larry Rubin later reflected. 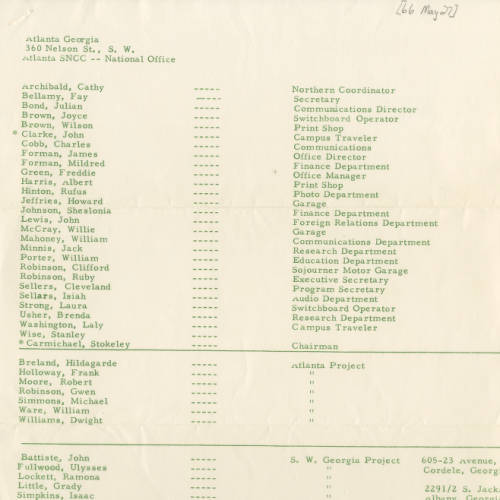