During his spring break in 1965, Temple University student Michael Simmons traveled to SNCC’s headquarters in Atlanta. Inspired by the 1964 Mississippi Freedom Summer, he planned to work in Mississippi. He changed his mind, however, after movement veteran Jimmy Travis informed him that the Mississippi project was in state of flux, undecided about where and how to go next. Travis encouraged Simmons to work in Arkansas, which he claimed “had an organized leadership with a more focused and disciplined project.” Simmons took the advice to heart and applied to be part of the Arkansas Project’s version of Freedom Summer in 1965.

As one SNCC worker noted, “Arkansas was in the hinterland of SNCC publicity and consciousness,” often overshadowed by SNCC’s work in Mississippi and Southwest Georgia. The Arkansas project had begun in the fall of 1962, when Bill Hansen initiated a new round of direct action protests against the city’s segregated public accommodations, which quickly desegregated the state’s capital, and then moved to the Arkansas Delta to begin a series of voter registration drives. But by 1964, SNCC had only seven full-time organizers in the state.

Though the Arkansas Delta had a similar political and economic climate as the Mississippi Delta across the river, outright voter suppression wasn’t nearly as intense. With local people like Mrs. Carrie Dilworth, SNCC helped double the number of registered Black voters in some Delta counties, slowly turning the Black vote into a powerful political force at the local and state levels.

In the summer of 1964, SNCC staff in Arkansas kept a keen eye on the events happening across the river in Mississippi. They began planning their own project for the following summer, though they decided to tone down the scale and make sure that there was an equal number of Black and white volunteers. “We felt we wanted to do it that way,” Bill Hansen explained, “because, well, some things that we personally saw that went on in Mississippi last summer that we didn’t want to happen here” — referring to some of the racial and class tensions between the northern volunteers and SNCC workers and local people.

The Arkansas project invited 50 volunteers to come to the state for the summer 1965. The main thrust of the summer’s program was voter registration. The Arkansas state legislature had just passed a new voter registration law that abolished the poll tax in state and local elections. SNCC saw the prospect of dramatically expanding the voting rolls. “The summer volunteers will allow the Arkansas Project to expand into 31 counties,” project director Jim Jones explained, including the hardcore areas, like Forrest City, Marianna, and Blytheville, hitherto untouched by the Movement.

When Michael Simmons arrived in Arkansas, he was assigned to work in West Helena, a small city along the Mississippi River. He mainly organized for voter registration but also encouraged Black farmers to participate in the ASCS (Agricultural Stabilization and Conservation Services) elections. ASCS administered land allotments and marketing quotas, often cheating Black farmers.

But for Simmons and the rest of the West Helena staff, the most dynamic part of the summer was the local Freedom School, which sometimes had as many as a hundred participants. Taught by Myrtle Glascoe, the students delved into Black history and current events. They frequently discussed the poor quality of their segregated and underfunded public education. Young people in nearby Marvell launched a school boycott the following school year, demanding integrated facilities. Over three quarters of the student body went on strike for six weeks, eventually forcing the local school board to desegregate the public schools–12 years after the passage of Brown vs. the Board of Education. 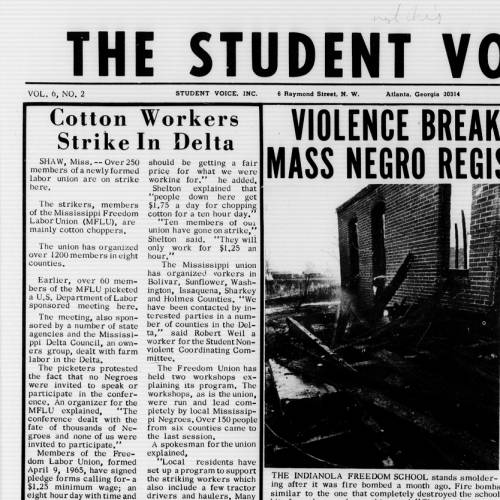