Less than a year after SNCC began organizing voter registration and direct action in West Helena, Arkansas in 1964, Carrie Lamar moved to the small delta town along the Mississippi River. She was born and raised in nearby Lexa, where she and her family worked as sharecroppers on white-owned plantations. As was true on the Mississippi side of the river, cotton was king in the Arkansas delta, and just as true as well, rich white landowners held the reigns of political and economic power. Black people, like the Lamar family, toiled in the cotton fields for $3.00 or $4.00 a day, depending on how much cotton they could pick. Very few were registered to vote.

That began to change when SNCC came to town in the fall of 1963 to begin a voter registration drive. SNCC had been active in the state since 1962, when Bill Hansen arrived in Little Rock at the request of the Arkansas Council on Human Relations. Even earlier, in March 1960, sit-ins led by Worth Long and other students at Philander Smith College had erupted in Little Rock.

Hansen and SNCC’s emerging Arkansas staff, composed mostly of Black people from Arkansas, wanted to expand into the state’s Black Belt, picking West Helena as its homebase. “Those are the hardcore conservative hate areas,” explained Jim Jones, who joined SNCC in Pine Bluff, “because all that part of Arkansas is where all them big plantations was.”

In these staunchly racist areas, SNCC gave priority to voter registration over nonviolent direct action. This was in part a practical decision–the area was too poor for a direct action campaign to bring about significant changes. For sharecroppers and tenant farmers who were barely making enough to live, segregated lunch counters and movies theaters were not a major concern. Also, in many Delta counties, Black people made up the majority of the population, which meant that the franchise was a key to unlocking Black political power. Following SNCC’s lead in Mississippi and Southwest Georgia, the Arkansas project “got off the whole idea of public accommodations,” recalled Bill Hansen, “and started getting involved in political action and voter registration.”

Jim Jones, who was raised on a family farm in Lewisville, Arkansas, was one of the project’s most effective community organizers. He spearheaded SNCC’s efforts in the Delta, often using his Arkansas roots to connect with local people. In many of the communities that he worked, Jones found that women were the backbone of their local movements. History that went back further than the lives of the young SNCC workers also helped. In Gould, Arkansas, Mrs. Carrie Dilworth, a former Southern Tenant Farmers Union (STFU) worker, welcomed SNCC with open arms. She allowed SNCC workers to use her home, not only as the Freedom House, but as a community center and freedom school as well.

Despite the help from people like Mrs. Dilworth, many adults were skeptical initially, thinking that SNCC organizers would just cause trouble and then leave. But young people were drawn to the freedom workers in their midst. “They were like giants,” Carrie Lamar recalled of the SNCC workers in West Helena. “I wanted to be a part of everything that was going on.”

Lamar and some of her high school friends assisted the Movement anyway they could, whether it was knocking on doors trying to get people to vote or singing at mass meetings. They were the foot soldiers of the Movement in West Helena and continued their activism after SNCC left the area in 1966. Lamar helped form a militant youth group in Little Rock called BUY, or Black United Youth, which focused on getting fair employment practices for Black people in Arkansas.

The Arkansas Project was able to register a large amount of Black voters in a relatively short time period. Jefferson County, on the southern edge of the delta, saw a 90% increase registered Black voters. Other areas saw similar increases, so much so, that the project began to encourage Black people to run for the local offices that directly impacted their lives, like the school board and sheriff. The project’s scope and effectiveness reached its peak in the summer of 1965, when it hosted it own version of Freedom Summer.

“Excerpts from an Interview with James Jones,” Arsnick: The Student Nonviolent Coordinating Committee in Arkansas, edited by Jennifer Jensen Wallach and John A. Kirk (Fayetteville: The University of Arkansas Press, 2011), 101-106. 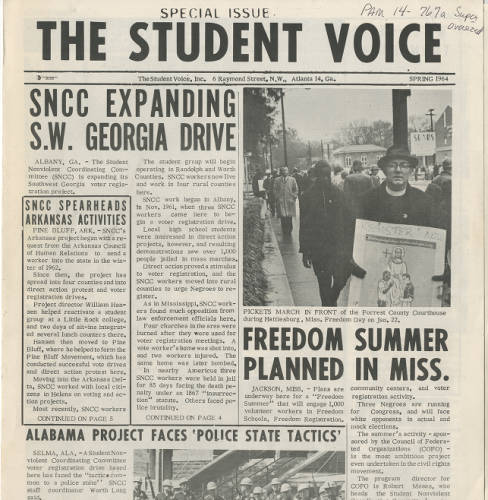 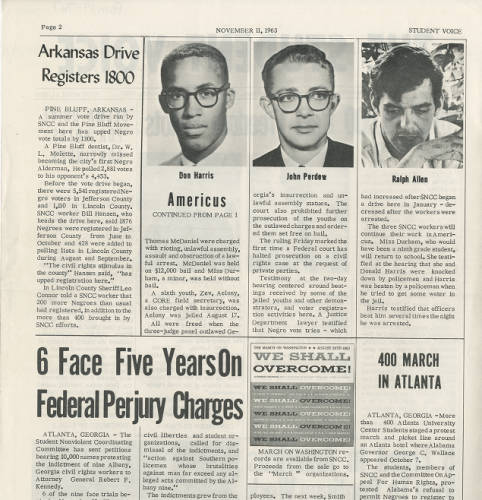