Africa figured prominently in SNCC’s concerns. At its founding conference in 1960, SNCC announced its identification with the African liberation struggle. “We identify ourselves with the African struggle as a concern for all mankind.” At its second conference held that October, Alphonse Okuku, an Antioch College student and brother of Kenya labor leader Tom M’Boya, was a featured speaker. The Movement, he said, “brings to our attention the great significance of the African struggle and its relationship to our fight.”

SNCC’s call for “One Man, One Vote” was borrowed from the Zambian Independence Movement. At the 1963 March on Washington, SNCC chair John Lewis proclaimed, “One Man, One Vote is the African cry. It must be ours!”

On March 21, 1966, James Forman, John Lewis, Bill Hall, Cleve Sellers, and Willie Ricks occupied the 14th floor of the South African Consulate for three hours to “protest the inhuman and barbaric system of apartheid by the South African government.” The protest came six years after the Sharpeville Massacre, when 150 Black South Africans were wounded or killed in protest of passbook laws. After their arrest, singer Harry Belafonte and actor Sidney Poitier posted the $250 bond. A week later, SNCC moved their demands and protests for justice to the South African Embassy in Washington D.C. 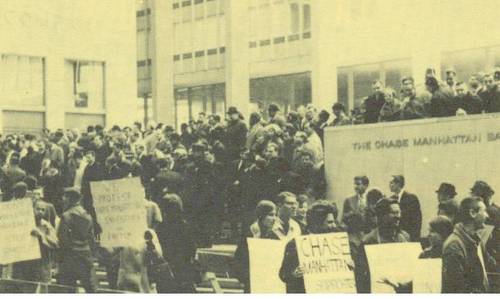 The New York Consulate sit-in was part of a wave of SNCC protest focused on South Africa. SNCC began fighting for divestment in 1965 when they demonstrated with the Students for a Democratic Society (SDS) at the Chase-Manhattan bank. With large-scale investments in South Africa, they argued, the bank was complicit in the racist and violent regime. The mass of 400 protesters exposed the bank’s profiting from apartheid and forced the issue into public consciousness. In 1967, SNCC took up the cause of twelve Black employees at Chase-Manhattan who were intimidated, harassed, or denied promotion at work. With SNCC’s support, the workers filed charges of the bank with the New York City Commission on Human Rights.

After the New York protest, SNCC’s international consciousness continued to develop. At a June, 1967 staff meeting, SNCC announced its dedication “to the liberation not only of Black people in the United States but of all oppressed people, especially those in Africa, Asia, and Latin America.” In the 1967 Statement on Africa, SNCC declared, “As both movements have matured and the lessons of previous struggles have been drawn, they have increasingly emphasized the extent to which their fate has been linked – without their consent – to Great Power struggles.”