At SNCC’s May 1966 spring conference in Kingston Springs, Tennessee the air was charged with intensity. The organization was charting its future. “The two burning issues,” recalled James Forman, then serving his final days as SNCC’s executive secretary, “were the objectives of SNCC and the role of whites in the organization.”

For SNCC, the Lowndes County project represented a much-needed new direction for political organizing. Since 1961, the organization had focused on registering Black voters in some of the most violently racist areas of the South, and though these efforts paid off with the passage of the Civil Rights Act in 1964 and the Voting Rights Act in 1965, the question now was: “who can we vote for — how can we make the vote meaningful?” Organizing independent Black political parties at the grassroots level offered one promising lead.

At Kingston Springs SNCC began to lay the foundation for making independent political organizing its priority. First, the organization discussed the role, if any, of white people in the organization. This discussion had begun with Freedom Summer. Some of SNCC’s Black organizers thought that the presence of white organizers derailed the development of local Black leadership. SNCC was already beginning to experiment with all-Black projects in Atlanta and in Lowndes County after the murder of white divinity student Jonathan Daniels. At the Kingston Springs meeting, there were strong Black voices urging whites to organize in impoverished white communities that faced similar types of political and economic exploitation.

At the same time, SNCC held its annual elections for chairman, executive secretary, and program secretary–the organization’s executive positions. The current chairman, John Lewis, had been in the position since the summer of 1963. A firm believer in nonviolent direct action, many thought he was growing out of touch with SNCC’s grassroots political efforts. “He wasn’t paying attention to what the organization was doing,” recalled Fay Bellamy. In Lowndes County, Lewis even encouraged locals to vote in the Democratic primary despite SNCC’s efforts to build an independent party. Carmichael didn’t think that Lewis deliberately tried to undercut SNCC’s work in the county, but questioned his relationship with the field: “what does it say if the chairman is that far out of touch with his organization?”

After a late night of discussion and debates, SNCC held an initial election for chairman, which John Lewis won. However, Worth Long, an Alabama staff member, made a passionate speech for a new vote. In the re-election, held early in the morning, Carmichael won handily. Ruby Doris Smith Robinson was elected as SNCC’s executive secretary, and Cleveland Sellers became SNCC’s program director.

The mainstream media attacked the election. Rowland Evans and Robert Novak, columnists for the Washington Post, led the charge, characterizing Carmichael and his supporters as reverse racists and Black nationalists. They called it “a coup” by radicals who wanted to undermine SNCC’s work in the South. “This is all untrue,” Forman recalled. Years later, Lewis himself would comment “More than anything else, what happened in 1966 can be traced to to what happened in Atlantic City in 1964. Stokely and I were symbols about the sense of direction . . . I didn’t take it personally. Change is bound to come in any movement where you don’t have a top down structure.” 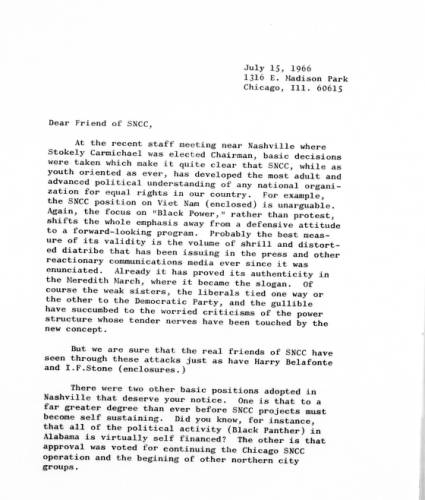 Letter to Friends of SNCC groups regarding decisions made at the Kingston Spring meeting, July 15, 1966, Lucile Montgomery Papers, WHS

Click Here to View Document
William Price, “SNCC Charts a Course for the Future: An Interview with Stokely Carmichael,” 1966, crmvet.org