In January of 1966, the Georgia State Legislature voted to bar Julian Bond from taking his seat as representative for Atlanta’s 136th Legislative District because of his support for SNCC’s anti-Vietnam War position. The vote prompted an outpouring of criticism from movement leaders, with Martin Luther King Jr. backing a rally in support of Bond. A group of young activists in Atlanta, which included Zohara Simmons, Gwen Patton, Donald Stone, and Bill Ware, were also angered by the vote and joined together to work toward re-electing him.

The Special Committee to Reelect Julian Bond canvassed the in-town Atlanta neighborhoods of Bond’s district for the upcoming February special election. They passed out flyers containing SNCC’s statement on Vietnam and clarifying their position on the war. Their efforts bore fruit on February 23rd when Bond was once again elected to the Georgia House of Representatives. While the legislature voted once more to bar Bond from taking his seat, the Special Committee emerged as an official–and radical–project within SNCC known as the Atlanta Project.

The Atlanta Project demonstrated SNCC’s turn from rural to urban organizing in the mid-1960s. In canvassing for Bond, the Special Committee became familiar with the problems facing poor Atlantans: poor wages, lack of transportation, and especially the lack of available quality housing. By the time the Atlanta Project began receiving SNCC funding in February 1966, the project had become focused on a small working-class neighborhood known as Vine City.

Though it was only a mile and a half from the gold-leafed dome of the Georgia Capitol, Vine City was a deeply impoverished community rife with substandard housing, inadequate street lighting, and bad roads. Martin Luther King, after touring the Vine City area in 1965, lamented that the, “living conditions were the worst I had ever seen…I had no idea people were living in Atlanta in such conditions. This is a shame on the community.” 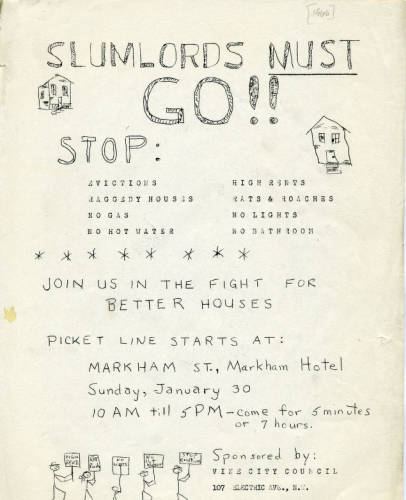 The cold winter of 1966 made these conditions even more pressing. Along with a loose coalition of local activists and leaders known as the Vine City Council, the Atlanta Project embraced Black nationalism in new ways for SNCC. In addition to blocking evictions and providing blankets, many in the project became increasingly concerned with the racial component of economic and social struggles. Early in February, Ware and several of the Special Committee were arrested for attempting to block the eviction of a resident. “There must be unity among black people,” Ware shouted to the crowd watching the Atlanta Police Department place him in a paddy wagon. “The only way we can stop evictions is for the people to come together!”

One of the ways that the Atlanta Project was different was the way in which pushed racial solidarity and Black consciousness forward as a major concern. Many of the project’s staff believed that white participation in a Black social movement was problematic and that social change would not occur with such racial integration. They wanted to awaken, according to project leader Ware, “a sense of pride in [Black people’s] beauty, strength and resourcefulness; and also a meaningful sense of self-respect that they can only gain when they see Black people working together accomplishing worthwhile programs–without the guidance and/or direction and control of non-Blacks.”

This turn toward Black consciousness, and especially the turn to separatism, generated conflict among SNCC’s leadership. Cruising through neighborhoods with sound trucks, speakers booming, Atlanta Project members asked the community, “What has your White Jesus done for you today?” When Jim Forman and others confronted Ware, he argued that it was SNCC’s leadership that was out of touch. Ware would go on to argue white participation was “the biggest obstacle” in the path of “Black folks getting liberation.”

Andrew B. Lewis, The Shadows of Youth: The Remarkable Journey of the Civil Rights Generation (New York: Hill and Wang, 2009). 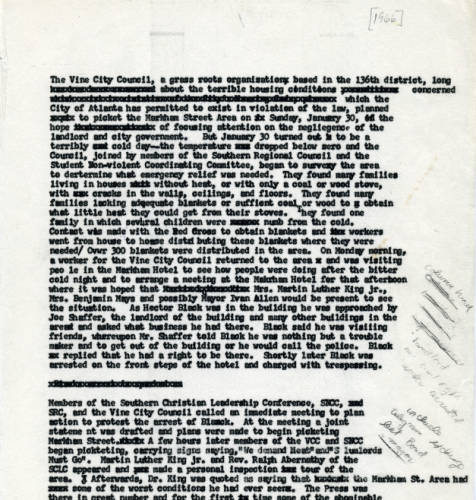 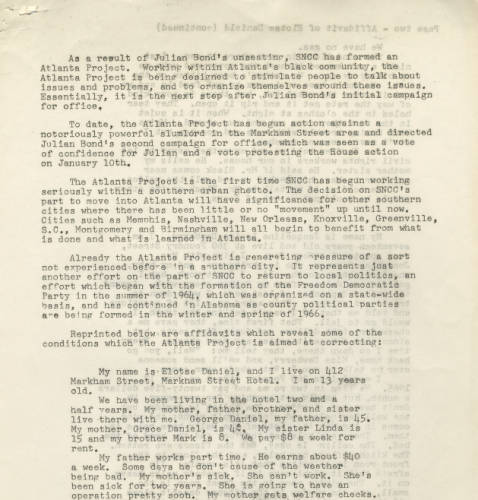