Occupation of Greenville Air Force Base

On January 31, 1966, about 70 African American sharecroppers, tenant farmers, and seasonal workers occupied the empty barracks of the Greenville Air Force Base to protest their desperate economic plight in the Mississippi Delta. They carried blankets, stoves, coal, mops, brooms, and water. 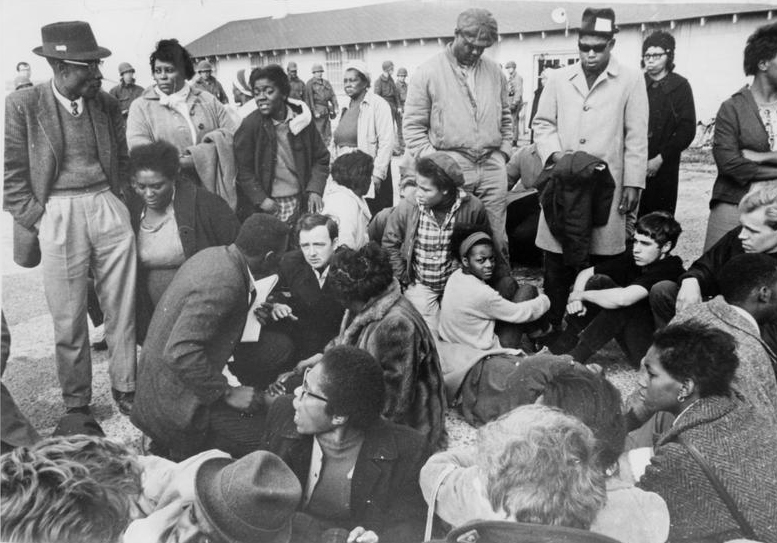 Protesters at the Greenville Air Force Base, January 1966, crmvet.org

Their demands were simple: land, food, jobs, shelter, and the basic necessities of life. Their wages, averaging $3 for a 12-hour day, made their life unlivable. They lived in shacks, and many were in debt to plantation owners for those shacks. The winter that year was unusually cold. When a base officer ordered them to leave, they told him, “We are here because we are hungry and cold and we have no jobs or land. We don’t want charity. We are willing to work for ourselves if given a chance.”

The decision to occupy the abandoned air base emerged from a meeting held by SNCC’s Poor People’s Corporation, which took place two days before the demonstration in the Mount Beulah Center of the Delta Ministry of the National Council of Churches and the Mississippi Freedom Democratic Party. Nearly 700 hundred poverty-stricken people from around the state had gathered there to discuss their grievances over the white power structure’s domination. LBJ’s ‘War on Poverty’ had little impact on these impoverished farm workers. The demonstrators decided that taking over the base, which had closed, would send a strong message to Washington that “people were not only hungry in the Delta, but people needed homes and land.”

State and federal officials were surprised by the occupation. City and county officials refused to evict the protesters. Instead, they brought in a Justice Department official to convince the group to leave. The protesters refused. So, during the middle of the night, 150 military police, led by major general R.W. Puryear, were mobilized to retake the base from the nonviolent protesters. On Tuesday, February 1, the U.S. Air Force surrounded the building. Major General Puryear told the protestors that they had to leave. The protesters refused, telling him they had nowhere to go.

General Puryear asked them to leave again, emphasizing the fact that they did not have heat or basic plumbing. The MFDP’s Unita Blackwell, and a leader of the Issaquena County Movement, replied, “If that’s all you got to say, I guess we’ll stay right here.” Eventually, the Air Police entered the building and escorted the protesters off the base. No charges were filed against the occupiers. They found temporary refuge at the MFLU’s Strike City and then moved to land on a Black-owned farm in Issaquena County until poor weather conditions forced them to move on. In the end, they returned to Mount Beulah while the Delta Ministry tried to find them a place to live and work.

Meanwhile, back in Washington, Attorney General Nicholas Katzenbach warned President Johnson, “…the situation demonstrated by the invasion of the Greenville Air Base…is potentially explosive. Many thousands of poor Negro workers are losing their jobs, and, in many instances, their homes as well.” As a result, federal funds were quickly released under ‘Operation Help,’ and by the end of the program six months later, nearly 500,000 hungry people received food assistance.

Funding for the Head Start program was also released, and for a brief period of time, the Child Development Group of Mississippi (CDGM) managed to survive, providing preschool education and nutrition to African American children. But over time, these programs were destroyed by the state officials who vehemently opposed programs that encouraged the poor. CDGM was attacked and destroyed by state officials opposed to parents taking decision-making roles in the education of their children and broader community affairs. Washington’s promise to provide job-training, employment opportunities, business development, and land retention never fully materialized, and Black people in Mississippi were left with no economic and little political power.

“Why We Are Here at the Greenville Air Force Base,” January 31, 1966, Mississippi Freedom Democratic Party Records, Wisconsin Historical Society.

“The Background of the Greenville Air Base Live-In,” The Movement, March 1966, Civil Rights Movement Veterans Website. 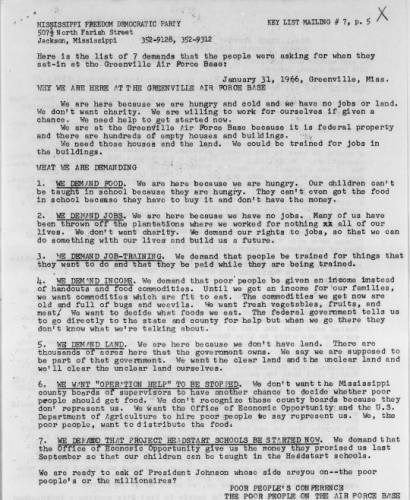 Click Here to View Document
“The Background of the Greenville Air Base Live-In,” The Movement, March 1966, crmvet.org