Before SNCC became an organization of organizers it was a network of campus affiliates mostly engaged in protest. The Greensboro sit-ins on February 1, 1960 captured the imagination of young Black people. Within months, thousands of people–mostly Black college students at HBCUs–were participating in sit-in demonstrations across the South. They formed campus organizations.

Lonnie King, for example, was a student at Morehouse College in Atlanta when he read about the Greensboro protests in Atlanta’s daily Black newspaper, The Daily World. He immediately approached fellow student Julian Bond about getting something similar started in Atlanta, and they began having meetings on campus. They formed the Committee on Appeal for Human Rights (COAHR). The group published “An Appeal for Human Rights,” which outlined the students’ social and political concerns, in several local newspapers. It marked the beginning of a city-wide sit-in movement that was led by the college students.

Something seemed to be in the air. Even before the Greensboro sit-in protests, in Nashville, Tennessee, a small group of students mentored by Rev. James Lawson had been practicing nonviolent direct action techniques. “I remember we used to role play and we would do things like actually sit-in – pretending we were sitting in at lunch counters, in order to prepare ourselves to do that,” explained Diane Nash, a Fisk University student at the time. Within two weeks of the Greensboro sit-ins, the students launched a campaign against segregated public accommodations in downtown Nashville, which were, according to activist Bruce Hartford, “the largest, most organized, most disciplined, and most persistent of the student sit-in groups in the South.”

Similar things were happening on campus after campus. In Orangeburg, South Carolina at Chaflin College and South Carolina State, student protests began in March 1960, led by Chuck McDew, who later would become a SNCC chairman, and Thomas Gaither. At Howard University in Washington, D.C., students formed NAG (Nonviolent Action Group) and began sit-ins in Virginia and Maryland, as well as protest marches in the nation’s capital.

On Easter weekend in 1960, these student groups were brought together by Ella Baker at Shaw University in Raleigh, North Carolina. At her urging, the sit-in leaders formed a temporary Student Nonviolent Coordinating Committee (SNCC) to keep the lines of communication open between the groups and to, when possible, coordinate activities. “Thus,” explained Stokely Carmichael, who joined NAG in the fall of 1960, “an isolated and impulsive act of defiance… evolved into an organization, or at least the barebones of one.” Each campus group was permitted two representatives to the “Coordinating Committee.”

NAG was one of the clearer examples of the relationship between campus affiliates and SNCC’s later organizing work. Members made frequent trips to Maryland’s eastern shore to support Gloria Richardson and the Cambridge Nonviolent Action Committee (CNAC). They also volunteered for SNCC projects in the Deep South. These experiences by NAG members and members of other campus affiliates seasoned some of the first crop of young organizers who would prove vital to SNCC’s work throughout its existence. Prominent among them: John Lewis, Chuck McDew, and Stokely Carmichael.

More so than chairmanships, the young men and women who emerged from SNCC’s campus affiliates on HBCU’s drove the organization’s work throughout its existence. As SNCC moved away from campus-based protests and into grassroots political organizing, campus affiliates continued to play an important role in the organization, generating publicity for its work and support whenever possible.

Howell Raines, ed., My Soul is Rested: The Story of the Civil Rights Movement in the Deep South (New York: Penguin Books, 1977). 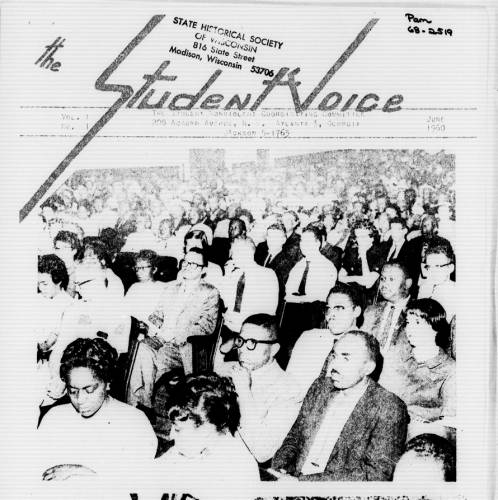 The first edition of The Student Voice, June 1960, WHS