Civil rights activism was ingrained into Gaither from a young age. He remembered sitting around the dinner table discussing the latest issues, including the murder of Emmett Till and the Montgomery Bus Boycott. Both of his parents were registered voters and active supporters of the NAACP in their hometown of Great Falls, South Carolina. His family never accommodated their lives to white supremacy. His father even resigned from his teaching job to protest the unfair treatment of Black teachers from the all-white school board. This fighting spirit was instilled in Gaither.

Despite his family’s history of resistance, Gaither had never heard of nonviolent direct action until the sit-in movement broke out in 1960. “We didn’t know anything about nonviolence or how to organize a sit-in,” he recalled. However, James McCain, a Congress of Racial Equality (CORE) field secretary, came to Orangeburg and began instructing the student activists on the basic tenets of philosophical nonviolence. At the gymnasium on Claflin’s campus, Gaither and other students “started putting together socio-dramas of situations that might be faced if we were doing a sit-in, or if we were picketing.”

On March 15, 1960, the Orangeburg student movement conducted a series of sit-ins at downtown businesses that refused to serve Black people. The protests resulted in mass arrests. 350 people were herded into an open air stockade–they had already filled the city and county jails. Gaither was proud of the student activism. “This was our movement, this was our time to move,” he remembered. “We felt that our elders had had their opportunity.”

A year after the first sit-ins in Greensboro, Gaither helped organize protests in Rock Hill, South Carolina. He was one of the “Friendship Nine,” a group of nine students who refused to be bailed out of jail for sitting-in, choosing instead to serve 30 days of hard labor on the chain gang. “It didn’t make sense to violate the law,” Gaither later stated, “and then put money right back into the system.” The Rock Hill sit-ins helped usher the idea of “jail-no-bail” into the Movement’s political lexicon.

Gaither became a field secretary for CORE in the summer of 1960. He traveled throughout the South as a roving activist. He worked in Kentucky, California, and Arizona, before returning to the East Coast where he proposed the Freedom Rides because, despite a Supreme Court ruling outlawing segregation in interstate travel, southern states were ignoring it. Adding to his push for freedom rides was the fact that Rock Hill protests were not getting anywhere and he thought freedom rides through the city and elsewhere would add to the pressure for change.

Gaither became the “scout” for the Freedom Rides, a job that would take him to Jackson, Mississippi. There, Gaither served as CORE’s Mississippi project director. His initial task was to help coordinate the Freedom Rides that terminated in Jackson, which continued well into the summer of 1961. However, he soon engaged in conversations with Medgar Evers, Aaron Henry, and Bob Moses around a statewide voter registration campaign. He endorsed the idea of reactivating the Council of Federated Organizations (COFO), believing that a united effort was the only way to make progress. They decided to create a statewide network of local voter registration groups with the support and participation of SNCC, CORE, the NAACP, and SCLC.

Gaither wrote up the COFO idea with SNCC’s Bob Moses in early 1962, stressing the importance of a coordinated effort among the various organization operating in Mississippi in order to avoid confusion and duplicated efforts and to ensure that everyone’s goals were in harmony. The basic goal was to develop effective political leadership at the county-level and to link those leaders together over the whole state to form a network that could coordinate county-level activity. And thus, with this blueprint, began a renewed thrust for voting rights in Mississippi. 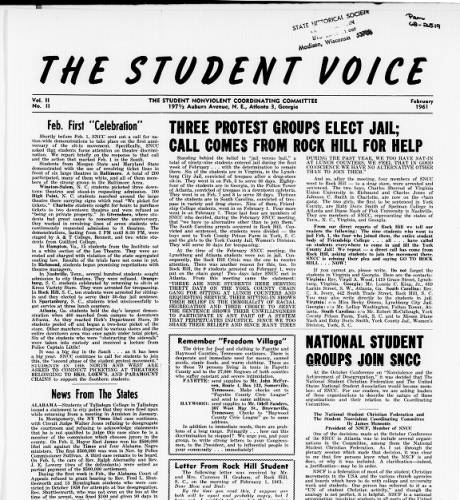 Click Here to View Document
“Council of Federated Organizations: What It Is, What It Does,” December 10, 1964, crmvet.org