Funding dozens of field projects across the rural South, paying staffers, sending out press releases and newsletters, supporting a photography department, fixing broken-down cars, and keeping the lights on in the Atlanta office took money. Lots of it. And someone in SNCC needed to keep track of what came in and how it went out.

While the field staff canvassed along rural back roads and faced down, gun-wielding racist sheriffs, SNCC accountant, Betty Miles, tried to make sure the organization’s bills got paid and the staff received their often irregular $10 weekly paycheck (which totaled $9.64 after taxes). SNCC operated as an unincorporated, non-profit organization, although it never had 501(c)(3) status. Managing SNCC’s bookkeeping might have been more routine than outrunning carloads of Klan members, but it also made the field work possible. When she started working part-time for SNCC in the fall of 1962, Miles was teaching accounting at Morris Brown College, after having earned an economics degree from Morgan State and a Master’s from Atlanta University. One year later, she began working full-time for SNCC. Shesslonia “Shessie” Johnson, a graduate student in math at Atlanta University, became her part-time colleague in the Bookkeeping Department.

There was an understandable tension between the on-the-ground field staff and the national office staff. The field staff appreciated the essential work the national office did in support of the work in the field. However, the realities of the Atlanta office staff were different from that of the field staff, who worked in rural areas of the Deep South. After experiencing the murder of a local activist or the burning of a movement church, matters of accounting–such as submitting receipts and budgets–became a low priority. Beyond that, field secretaries were accustomed to being in charge of their own projects; they, therefore, tended to resist attempts at oversight from the National Office.

It could also be difficult for field staff to get receipts for money spent or job estimates for money that they wanted to spend. Sometimes, instead of sending checks to the project director, the Atlanta staff sent payments directly to a local company who did the work for a SNCC project, like a mechanic who repaired a SNCC car. One field staffer complained that the practice “undermines the confidence of the biller in the project director.” “There seems to be a feeling that people in the field are conspiring to steal money from the treasury for personal use rather than legitimate use in the project,” the staffer wrote.

In late 1964, a new Finance Committee was established in the Atlanta office, composed of Prathia Hall, Betty Garman, Ruby Doris Robinson, and Shessie Johnson. Their purpose was to assess the state of funds, the request for funds, and bills that needed to paid. Part of the motivation behind the new committee was to address concerns that people in Atlanta weren’t sympathetic and knowledgeable of the field staff’s needs.

Staying on top of funds was a constant challenge. A staffer in the D.C. office admitted to Betty Garman that their receipts from January through July 1965 were “a little screwed up” and went on to explain that “the receipts don’t equal the deposits and it’s impossible to tell which loans were paid back.” She closed off her letter by stating, “don’t ask me what we did with almost $2,000.00 worth of petty cash, because I haven’t the vaguest idea.”

All funds raised on behalf of SNCC were supposed to be forwarded to SNCC’s Atlanta headquarters where they were deposited into the organization’s account at the Black-owned Citizens Trust Company Bank. Trying to get the various SNCC offices to comply with bookkeeping procedures was another matter. Atlanta bookkeeper Shessie Johnson attempted to instruct the D.C. office staff in the process. She asked them to report incoming money daily, make daily bank deposits, double check that the deposit equaled the receipts, and send copies of checks written, receipts, and bank statements to Atlanta at the end of each month.

Two weeks later, the situation looked bad. The D.C. office had made a number of loans to individual staff members but not a one had been paid back. “Since you have […] taken the responsibility of loaning people money,” Johnson wrote, “it is your responsibility to make the collections for them also.” She also noted that “none of your deposits for the month have equaled the receipts for the month.” Johnson warned the staff that they needed to follow procedures immediately, or “it may be necessary for me to come to DC to talk with you.”

Years later, SNCC staff coordinator, Worth Long, noted the difficulty inherent in organizing the organizers. Keeping track of SNCC’s finances might have been one of the most under-recognized responsibilities in the organization. But amazingly–even with a rotating staff of people, offices across the country, and thousands of supporters–SNCC successfully managed a budget of over a million dollars, giving its field staff the support they needed to organize. 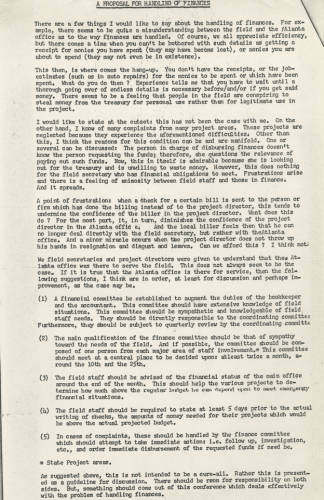 A Proposal for Handling of Finances [1964], Stuart Ewen Papers, WHS 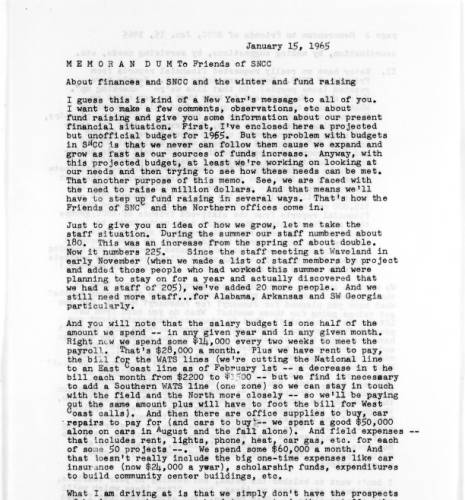 Memo from Betty Garman about finances and SNCC and the winter and fundraising, January 15, 1965, Lucile Montgomery Papers, WHS