Home » Our Voices » Roots of Organizing » Values in Organizing

SNCC’s organizing work depended on understanding the communities they were working with and the realities of the people who lived there. That meant knowing what divisions and differences existed within a community. Worth Long explained it as needing to learn what was acceptable to people and then figuring out how to bring these different ideas together while moving forward.

How do you study and acknowledge what systems already exist?

There was a gap in the culture of ordinary people and those at the top, something that Long had encountered well before he came into SNCC. His father had served as a the presiding elder–in practice, a coordinator–for ten churches around Durham, North Carolina, while Long was growing up. From this, Long learned how to look for systems that existed within a community and how to take what people valued and unite them around a common purpose. 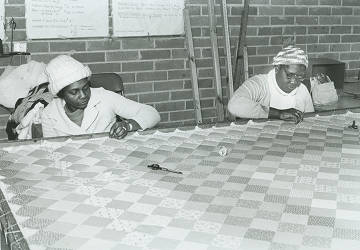 After high school, Long joined the Air Force, which eventually led him to Montgomery, Alabama for an advanced medical training session in 1959. On the weekends, he ventured out into the surrounding areas to see what was going on, meeting people who’d been involved in the Montgomery Bus Boycott and heading west to go to a football game in Selma and visit the all-Black community of Gee’s Bend.

He began comparing what people were doing in the Alabama Black Belt and what was happening in Durham. The question at the forefront of his mind: how can you organize ideas and people?

If you’re starting out with nothing, than you have to consider nothing an asset, and find what surrounds nothing and use it as the element.

You Have to Consider Nothing an Asset

SNCC encountered these same questions in Mississippi. By 1964, Maria Varela was doing adult education work based at Tougaloo College, just north of Jackson, Mississippi. SNCC had been organizing around voting rights for Black people in Mississippi since 1961. The vote held the key to political power and the ability of Black communities to bring about meaningful change in their lives. During the summer of 1964, Black Mississippians under the umbrella organization of COFO built the Mississippi Freedom Democratic Party, a parallel political party designed to demonstrate how Black Mississippians were excluded from the political process. Their challenge to the seating of the all-white Mississippi Democrats at the 1964 Democratic National Convention and the voting rights campaign in Selma the spring of 1965 helped lead to the passage of the Voting Rights Act of 1965. 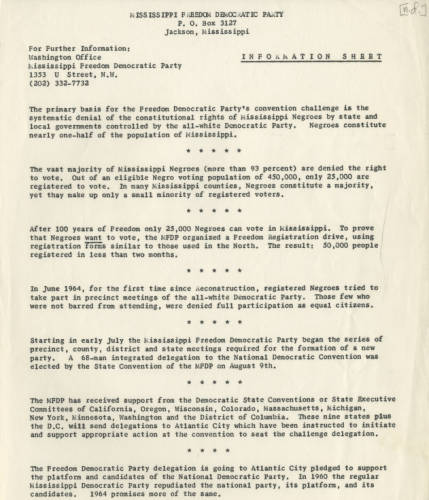 Working-class Black Mississippians with the of support of SNCC had built the MFDP from the ground up. They had served as delegates, knocked on doors canvassing, taught at Freedom Schools, and made the MFDP their own organization. Ella Baker had taught SNCC that leaders came from ordinary people. But after the vote was won, Black middle class leaders emerged, many of whom hadn’t participated in the Movement when it was more dangerous and there was more to risk. Many of these people held a talented-tenth idea of leadership, believing that the most educated members of the Black community should and would lift up the rest. Maria Varela saw these debates about who should be a leader play out in county level Freedom Democratic Party meetings. Maria Varela remembered, “That’s where our ideals ran right into reality.”

Who Can Organize and Deliver

The debates about who was qualified to be a political leader also played out in education. SNCC had set up Freedom Schools for Black Mississippi children during the 1964 Summer Project, and low-income women had volunteered in these classrooms. Shortly after, President Johnson’s War on Poverty established funds for early childhood education programs for poor children.

It was so tough because you really did have folks in the Black community that really did feel that the middle class teachers were better qualified. So we didn’t always win those battles.

In Mississippi, people coming out of the Mississippi Freedom Democratic Party established the Child Development Group of Mississippi to run the federal Head Start program. SNCC saw Head Start as a way for the community to take control of their children’s education and hire the local women who could connect with the children as teachers, as opposed to those who had qualifications on paper.

Who Can Be a Teacher?