Home » Our Voices » Roots of Organizing » Forms of Resistance

As SNCC members moved from college campuses into rural communities of the Deep South, the strategies, goals, and even the culture of the organization shifted. As their mentor Ella Baker predicted, the young organizers began to see that racial discrimination was much deeper than segregated restaurants and department stores. They saw how systemic political exclusion and economic exploitation maintained Black second-class citizenship. They also joined in local people’s struggles against discrimination. At first, this meant working with established leaders, like Aaron Henry and Amzie Moore, to organize voter registration drives and political education workshops. But over time, SNCC organizers sought to address other problems that the vote couldn’t fix, like underemployment and job discrimination. 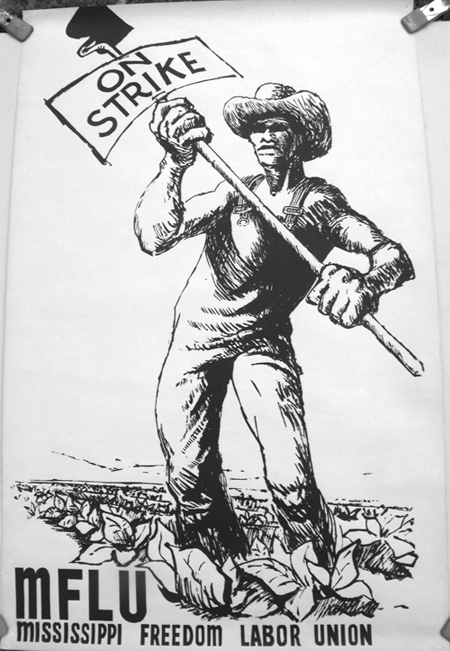 Blacks in the rural Deep South worked mostly as sharecroppers, tenant farmers, and migrant laborers. They were trapped in a cycle of poverty reinforced by the power of the white landowning elite. In the Mississippi Delta, for instance, whites owned roughly 90 percent of the land, even though Blacks made up the majority of the population. The same was true for most of the Black Belt South, where Black people worked the land that white people owned. By the mid-sixties, Black tenant farmers and sharecroppers were rapidly losing their jobs to mechanization and being pushed out of the South to the ghettos of the North and West.

SNCC organizers, recognizing that the South was undergoing massive structural changes, began to look for new and innovative ways to empower impoverished Black people. They helped local people form parallel economic institutions, like the Mississippi Freedom Labor Union and the Poor People’s Corporation, that served as powerbase for those dispossessed by mechanization. SNCC organized around the ASCS (Agricultural Stabilization and Conservation Service) elections, which determined crop allotments, distributed cash crop subsidies, and made loans to farmers. Worth Long and Maria Varela were a part of SNCC’s shift towards economic organizing, in what Long referred to as “the New Reconstruction.”

Worth Long took SNCC’s call for economic empowerment seriously. He spent the year of 1966 organizing in Arkansas and other southern states. He helped form BUY (Black United Youth) in Little Rock, Arkansas. A militant organization that demanded equal hiring practices and employment opportunities for Black people, BUY’s slogan was “you can buy, or you can build, or you can burn.” Long also founded a bookstore in downtown Little Rock. “We selected books based on their political or cultural or social content,” Long explained, “mostly history books or … books that they [the Black community] would not ordinarily have access to or buy.”

SNCC’s parallel institutional building often intersected with cultural organizing work, which Maria Varela called “culturally sustainable economic development.” In 1967, Worth Long and fellow SNCC activist Julius Lester operated The Lovin’ Spoonful — a haven for Movement activists in downtown Atlanta. “It provided a venue at which you could express yourself. Creatively express yourself,” recalled Long. Various people, including LeRoi Jones, a leader of the Black Arts Movement, the Harambee Singers, and others, came through The Lovin’ Spoonful while it was under Long’s supervision.

Come on Over to the Lovin’ Spoonful

Part 4: Life After the Movement