The sit-in movement spread like wildfire throughout the South in early 1960, including Louisville, Kentucky, where Anne and Carl Braden were celebrating the birth of their third child. Anne saw the student activism as “the beginning of a new day” and a refreshing departure from the legalism that tended to dominate the Movement during the forties and fifties. Though a new mother, she spent as much time as she could corresponding with her movement friends, including Ella Baker, whom the Bradens had befriended in Birmingham during the 1950s. 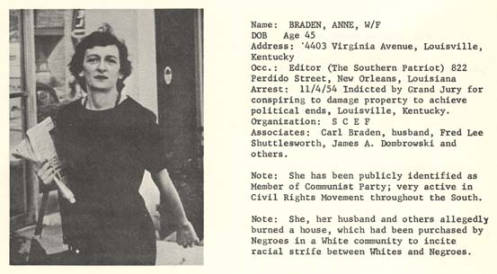 The Bradens had a tumultuous history of fighting for racial justice in the South that gained them respect in SNCC. Both were white southerners but of divergent backgrounds and dispositions. Carl was raised in a blue-collar, socialist-minded family and had spent time as a union organizer and labor reporter before working at the Louisville Times. Anne described Carl as “ruggedly individualistic;” he was known for his confrontational style and directness of speech. Anne on other hand was raised in a middle-class family from Anniston, Alabama and went to school at Randolph-Macon College in Danville, Virginia. She worked as a newspaper reporter in Anniston and Birmingham before she too joined the Louisville Times staff in 1947. The two married in 1948 and became a team dedicated to racial and economic justice in the South. Anne described her time with the Times as a transformative experience as she was exposed to an undercurrent of political dissent in Louisville. As she covered news in the city’s Black community and labor circles, she “came to identify with the oppressed instead of the oppressor, which transformed [her] entire worldview.” She began the process of “turning herself inside out” and with that came an unfaltering dedication to Black Freedom Struggle.

In 1954, just before the Brown vs. Board decision, the Bradens bought a house in an all-white Louisville suburb for Black World War II veteran Andrew Wade and his young family. The Wades had been trying to buy a house for months but were consistently denied because of race. They sought and gained the Bradens’ help. The Black couple’s occupancy of the house was immediately met with violence of all sorts. Whites threw rocks through the front windows, shot into the house, and burned a cross on their property. The South End Savings and Loans demanded foreclosure on the mortgage loan for the house. In this era of red-baiting, the purchase was called a Communist plot, and the two Bradens were charged with sedition under a World War I-era statute. Carl was sentenced to eight months in prison. 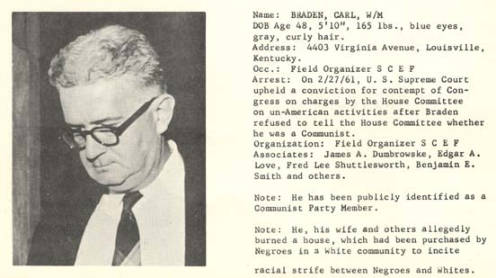 The couple struggled to find work without success after the sedition case until they joined the staff of Southern Conference Educational Fund (SCEF) in 1957. Carl and Anne acted as joint field workers, supporting civil rights movements in Birmingham, Mississippi, Tennessee, and other places in the South. The couple also worked hard to drum up white civil rights activism. SCEF was one of the few white organizations attempting to organize across racial lines.

In the early sixties, the Bradens, and especially Anne, were highly supportive of SNCC and worked hard to nurture and support the organization. Anne used her editorial input in the Southern Patriot to publicize the organization’s activities. She also shared her network with the young activists, putting them in touch with SCEF’s fundraising base as well as leftist allies. Beyond organizational support, Anne mentored white activists in SNCC, such as Jane Stembridge, Casey Hayden, and Larry Rubin. As Larry Rubin notes, Anne and Carl “were pioneers in the Movement we later joined. They helped pave the way for us.”

Catherine Fosl, The Subversive Southerner: Anne Braden and the Struggle for the Racial Justice in the Cold War South (New York: Palgrave MacMillan, 2002). 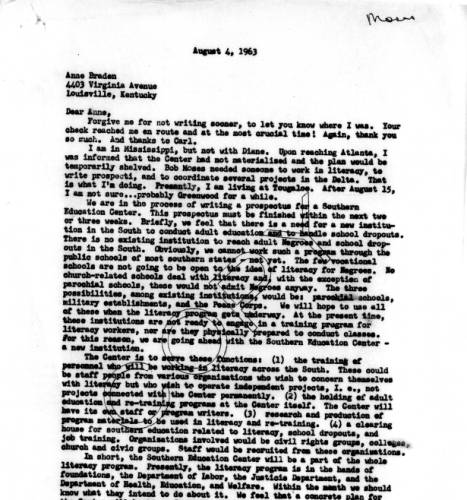 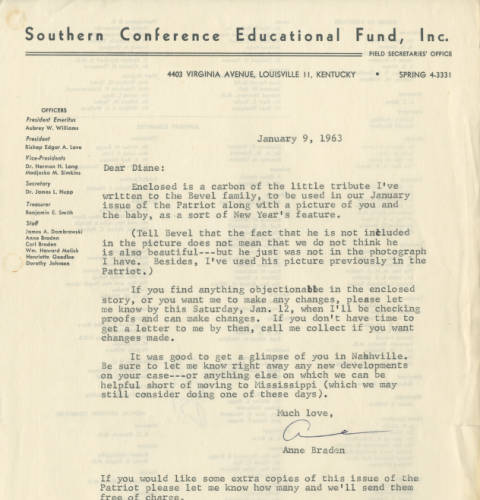 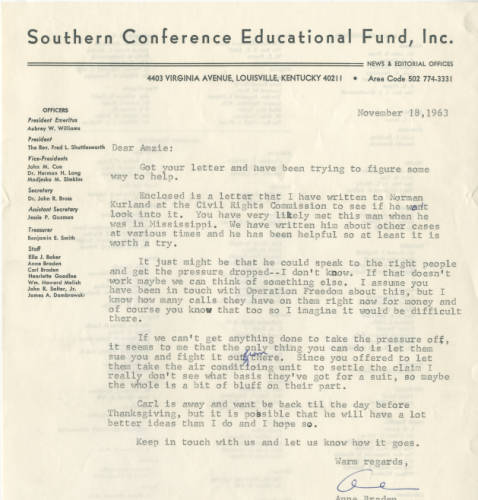