“We have not understood radicalism and why it must exist,” Billy Stafford often said. In his roles as Southern Campus Coordinator, education staffer, and fundraiser, Stafford was constantly exercising his sharp and creative mind.

Stafford found SNCC while he was a graduate student in sociology at Atlanta University. He soon bonded with SNCC staff members Frank Smith and Joyce Ladner, and his familiarity with the dynamics of college campuses positioned him well to eventually spearhead the Southern College Coordination Program. SNCC was always looking to increase political awareness and recruit bright students to join in the struggle.

Organizing campuses looked much like SNCC’s work in the rural towns of the Deep South: they fostered indigenous leadership and tried to get young people involved. In a coordinated effort, campus travelers hosted discussions about Freedom Schools, the MFDP, labor unions, housing insecurity, voter education, and how to conduct research. Strategy was key: “Of all the early SNCC group, Billy was the clear thinker, the intellectual who developed policy initiatives, published more of his ideas in papers to share with others,” remembered Frank Smith.

In December 1963, Stafford co-organized a staff workshop with Worth Long to: “1. Bring together workers from the field to share and discuss common problems and tactics; 2. Begin to develop a perspective which will help us in the future; and 3. Begin training fieldworkers in the techniques of conducting workshops to be held in all protest areas of the South.” There, they talked about SNCC’s role in communities, revisited the goals of the organization, discussed voter registration strategies, personnel problems, and how to interact with people. Stafford was always pushing for preparedness and a coordinated front, thinking critically about how SNCC could be more effective in its work.

Stafford also worked with Carole Merritt and Howard Zinn to develop work-study groups at Tougaloo College and Miles College to support the Southern Movement. They held long discussions with people in the field to see how students could best support them and what they needed most. They coordinated state conferences and leadership institutes where work-study students and field organizers would gather to discuss the issues they were facing. In summarizing the program, Zinn wrote, “it should be obvious… to the nation that a new democratic ideal has been fertilized in the minds of future leaders.”

After leaving SNCC he earned a degree in urban planning, and he went on to work with the National Urban League and the Community Service Society before eventually pursuing a doctorate. As a professor, Stafford “was the ideal for what a university professor should be,” shared Professor Don Johnson, “deeply intellectual and widely read, yet kind to his students and above all investing his scholarship and life in the cause of moving us all to a more equal and just society.”

Letter to the Eleanor Roosevelt Foundation from the Educational Commission of the Student Nonviolent Coordinating Committee, May 20, 1964, SNCC Papers, ProQuest History Vault. 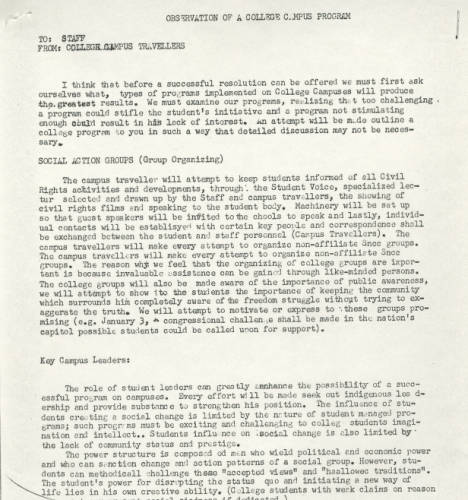