Raised by two mothers, one Jewish and one African American, it was her loyalty and love for both parents that propelled Faith Holsaert into the Movement. Her biracial family headed by two women was an anomaly and prompted hostility from neighbors. And so, after hearing accounts from friends and witnessing the onslaught of violence in the South, Faith Holsaert knew that she could no longer remain in New York. Holsaert had been fundraising for SNCC in the New York office after meeting some of these young activists at a summer camp in Beacon in 1960. She was also involved with the Harlem Brotherhood and the Cambridge Movement and had been arrested in Crisfield, Maryland with Peggy Dammond for her involvement in protests along the Eastern Shore. 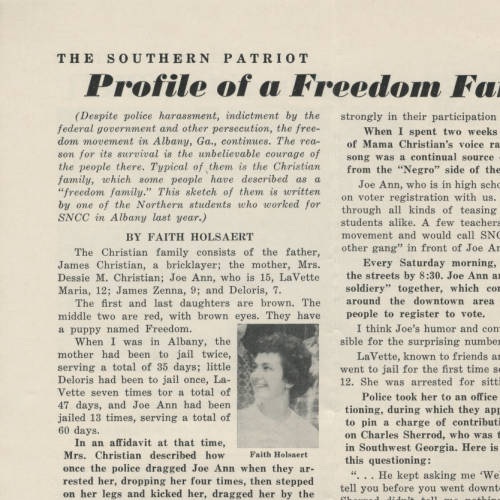 In the fall of 1962, Faith Holsaert requested a leave of absence from Barnard College and moved to Southwest Georgia where she joined the voter registration organizing efforts in Lee, Terrell, Dougherty, and Sumter counties. “Much as the past year at Barnard has meant to me,” she wrote, “I feel that my involvement in the civil rights movement would make it impossible for me to do justice to the fine education available to me at Barnard this year.”

Having grown up in Greenwich Village, Holsaert didn’t know how to drive a car when she arrived to Albany, Georgia. Charles Sherrod, who headed the Southwest Georgia project, recognized the need for her to have this skill and urged her to get a permit. However, upon arriving at the DMV, Holsaert was faced with two lines. She refused to wait in the line for whites only and wound up with a “colored permit.” Seeing that, Sherrod refused to let her drive, fearing that the repercussions would be worse should she be pulled over.

In “Terrible” Terrell County, Holsaert worked and lived with Prathia Hall and Carolyn Daniels. They crisscrossed the county with locals, speaking to residents about the importance of registering to vote. They also gathered data on local employers, such as Dawson Cotton Oil, which made surplus peanut butter, to gain a better understanding of the social, economic, and political dynamics of the area.

For Holsaert, faith and family were strong influences on her involvement in the Movement. Holsaert knew that she could not remain silent as the nation systematically and violently discriminated against African Americans. She was committed to those around her, despite the many physical and emotional challenges that she faced: “We had to protect one another in a deep sense. There is a public record. And there’s a record in our bodies, in our hearts, river shadows below rock cuts, dark moats in the sun.”

Holsaert still considers herself a SNCC person. She continued her work as an organizer following her direct involvement with SNCC. In New Mexico, through Betita Martinez, she connected with the Land Grant Movement. Later in West Virginia, she was involved with Mineworkers for Democracy and the Welfare Rights Organization, while raising her children and teaching school. She was one of six editors of Hands on the Freedom Plow: Personal Accounts by Women in SNCC. “As SNCC women, many of us feel a community responsibility to preserve our story…. We are, literally subversive after all these years.”

Book Discussion on Hands on the Freedom Plow, October 5, 2010, C-Span.

Faith Holsaert talks about how she became involved in the Movement, Our Voices: Strong People, snccdigital.org