Growing up in segregated Bennettsville, South Carolina, Marian Wright learned to resist oppression from an early age. When city parks allowed only white children, her father built a park behind his church for Black children to play freely. While attending Spelman College in 1960, she became a founding member of the SNCC-affiliated Committee on Appeal for Human Rights. Alongside Julian Bond, Ruby Doris Smith, Lonnie King, and other students, she fought to desegregate downtown establishments, pushing Atlanta to see that “every normal being wants to walk the earth with dignity and abhors any and all proscriptions placed upon him because of race or color.”

At 22, attending Yale Law School and now watching the Southern Movement from afar, Wright knew she needed return to the South. In early 1963, Wright joined COFO’s voter registration effort in Greenwood, Mississippi. She remembered marching with SNCC and COFO organizers to the Leflore County courthouse in March, when police and a deputized “posse” loosed dogs on them. Wright remembered “the dogs growling and the police pushing us back. And there was Bob [Moses], refusing to move back, walking, walking towards the dogs.”

Wright finished law school and became the first Black woman admitted into the Mississippi Bar. During Freedom Summer, she was on the frontlines of legal defense with the NAACP Legal Defense & Education Fund Inc., called “the Ink Fund.” The team of lawyers based in Jackson tried 120 cases that summer – ranging from defending welfare rights to demanding equal schools for Black children.

When the summer ended, Mississippi movement workers felt the impact of the volunteer exodus. Overwhelmed by the countless cases still in process from the summer, Wright and her two fellow lawyers at the Ink Fund were in a bind. For legal change to make its way to the people of Mississippi, they would need more support. Wright later reflected that “the need for sustained, ongoing advocacy was going to be essential if the children of Mississippi and their poor parents were going to have a chance.”

By 1966, the segregation of schools, private establishments, and interstate travel were officially illegal, the result of movement workers fighting tirelessly through direct action protest, strategic voter registration, and other efforts aimed at community empowerment. “So,” as Wright put it, “all the social and economic problems that underpinned the legal problems of segregation were left but at least we had done away with one huge termite.” In November 1966, she represented schoolchildren of Grenada, Mississippi and won a court order to immediately stop the continued segregation of Black children in public schools, as well as harsh discipline used against them.

When politicians in Washington continued to ignore the conditions of Black communities in the Mississippi Delta, Wright pressured them to pay attention. In April 1967, she convinced Bobby Kennedy, the former Attorney General and now a Senator, to tour the Delta with her. Wright knew that if he witnessed the crippling poverty that existed there, he would have to respond with urgency.

Wright led them from Jackson to rural Delta counties where they met with people, walked through their homes, and asked what they last ate. Wright recalled, “And usually you would find awfully bare cupboards when you opened them.” Kennedy called the condition of poverty in the Delta “a condemnation of all of us…that this could exist in a prosperous nation like ours.” Although Wright could not predict the impact that the trip would have on anti-poverty legislation, she did conclude that “from that moment on I knew that somehow he would be a major part in trying to deal with hunger in Mississippi for children.”

Wright went on to found the Children’s Defense Fund, leading the charge to expand Head Start programs and healthcare for all children. 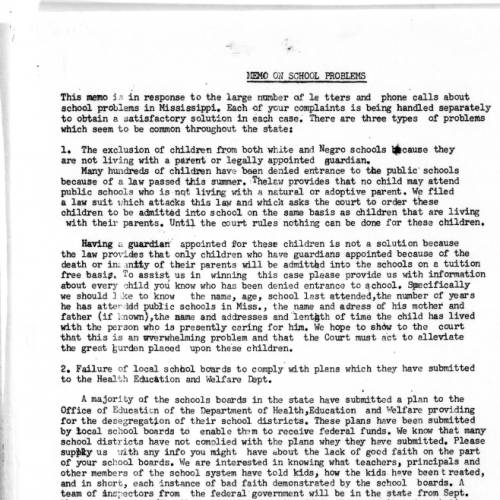