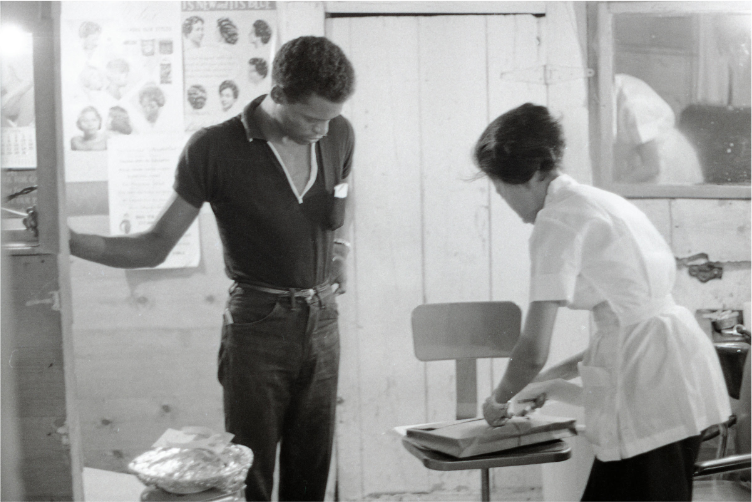 By the fall of 1964, Sandy Leigh’s ’63 Plymouth Valiant had well over 100,000 miles to its name. Leigh was driving day and night across dusty Mississippi roads campaigning for Ms. Victoria Gray Adams, a Black businesswoman from Palmers Crossing, a small community that is part of Hattiesburg. She had become active with the Mississippi movement and had decided she wanted to unseat the incumbent U.S Senator, John Stennis. Ms. Gray was running on the Mississippi Freedom Democratic Party’s ticket.

This was part of a larger effort by the Council of Federated Organizations, founded in 1962. By August 1963 they had decided to hold a mock election with Dr. Aaron Henry and Rev. Ed King on the ballot; it was time for Mississippi to see the power of the Black vote.

Leigh and others went door-to-door explaining what the ballot was, what it would look like, who were the people involved, and how it should be marked. They then had to set up polling places, but no government building would let them use their facilities. Many of the polling places ultimately were set up in local grocery stores, churches, and beauty parlors, with big signs out front saying “Vote Here.” 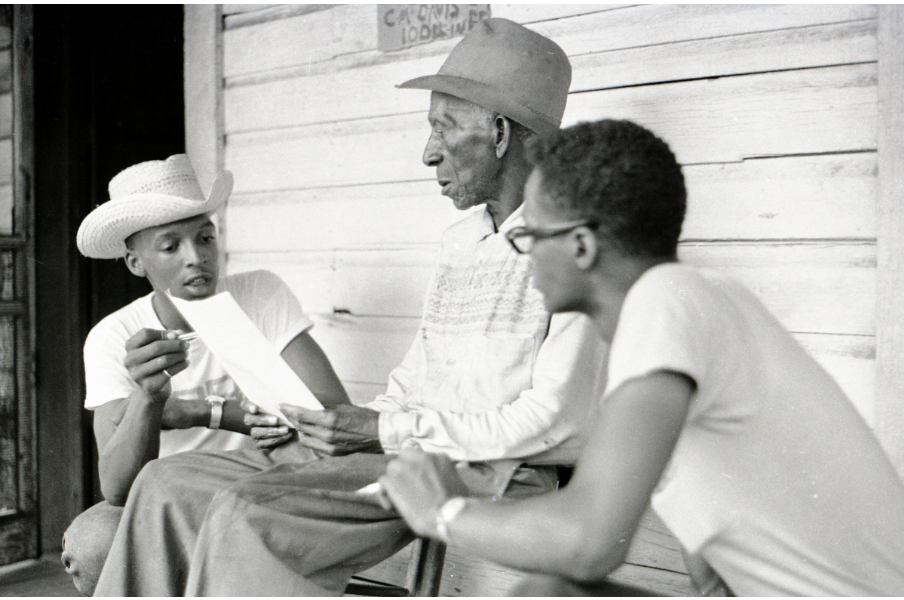 The Mississippi power structure saw it as a joke, until they realized how seriously people were taking it. Over 80,000 votes were cast in the 1963 Freedom Vote, even though there were only 12,000 registered Black voters in the state at the time. Part of the work in Hattiesburg was mobilizing for a “Freedom Day” mass attempt at voter registration. The day demonstrated to local people two things, recalled Leigh. “One, that when you start becoming relevant, that’s when you start becoming dangerous. And secondly, it was also demonstrated to them as an educational thing, that the power structure wasn’t going to give in an inch in any way, shape, form, or fashion and that other methods would have to be used to deal with them.”

Galvanized by Freedom Day and the organizing work that local people had been doing for years, Hattiesburg became SNCC’s largest site for Freedom Summer activity in 1964. Sandy Leigh was the Project Director, coordinating operations from 507 Mobile St. and Vernon Dahmer’s farm. More than 80 volunteers came down to Hattiesburg for Freedom Summer. There were six Freedom Schools, two community centers, a Freedom Library with five branches, and a complex system of neighborhood committees that organized food for SNCC workers and the families that cared for them. Sheila Michaels remembered, “Cordell Reagon had said to me…‘In community organizing, there are two people in a town who you really need to have interested in it. And I mean, they really have to be with you… the beautician and the midwife.’ And he said, ‘If you have those two, you have-.’ And we had the beautician. We had the midwife. And we had the doctor. And we had a schoolteacher.”

After Freedom Summer and campaigning with the MFDP on the issues of police brutality, economics, and the exclusion of the poor from the justice, Leigh went on to become the assistant director of the MFDP’s office in Washington. “He had [a] background in knowing how to run things, and he was efficient,” said Michaels.

Interview with Sheila Michaels by Charles Bolton, June 5, 1999, Center for Oral History and Cultural Heritage, The University of Southern Mississippi. 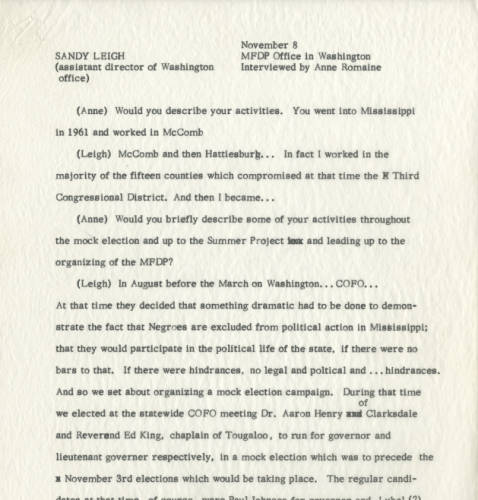 Click here to view document
Pamphlet for Freedom Day in Hattiesburg, “Give Them a Future in Hattiesburg,” January, 1964, Danny Lyon, dektol.wordpress.com