For Anne and Carl Braden and other activists battered by the red-baiting that followed World War II, civil liberties–the freedoms of thought, expression, and association–were an integral part of the broader struggle for social change. They recognized that the anti-communist hysteria that pervaded the nation was cultivated purposefully to destroy political and social activism. Dissidents were subjected to character assassination at the hands of public investigative agencies, like HUAC (House Un-American Activities Committee) and SISS (Senate Internal Security Subcommittee). “Worse of all,” wrote Anne Braden, “it has imbedded in the public consciousness the notion that there is something wrong and subversive about those who work for social change, and has thus stifled that element which is the lifeblood of democracy–citizen activity.”

The Bradens first earned their reputation as “notorious communists” in the early fifties, when they bought a home for the Ward family–a Black family–in an all-white neighborhood in Louisville, Kentucky. The white couple became “targets of combined anti-black and anti-red emotions,” recalled Anne, who witnessed first-hand how local and federal forces used the Red Scare to undermine the struggle for racial justice. For decades afterward, the Bradens were labeled anti-Americans and subversives for their political activism. 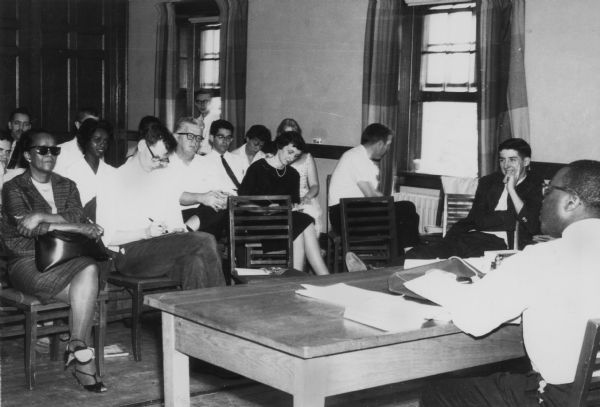 When SNCC formed in the spring of 1960, this anti-communist mentality was so deeply embedded in the nation’s consciousness that it was practically invisible, even within the burgeoning Civil Rights Movement. Anne Braden and Ella Baker did not want SNCC to get caught up the red-baiting that taken hold in other organizations within the Movement. In June 1963, with the help SNCC’s Dottie Miller (Zellner), the pair organized a three-day workshop on civil liberties. They pushed the SNCC activists to examine the relationship between their own struggle for Black civil rights and the on-going battle for civil liberties.

Like many SNCC meetings, the workshops turned into extended discussions about SNCC’s position on red-baiting. “After many long and difficult talk sessions,” recalled Dottie Miller, “the consensus was that SNCC (1) would not cooperate with any federal investigating committee, and (2) would accept assistance and participation from outside individuals or groups regardless of their politics.”

This consensus became the cornerstone of SNCC’s position of freedom of association. Throughout its history, SNCC fought for its right to associate with whomever it chose, despite opposition from much of the civil rights establishment. This position was in part a practicality–some of the most dedicated SNCC supporters had already been labeled communists, like Southern Educational Fund (SCEF), which had supported SNCC since its founding; the Highlander Folk School, an important training ground for civil rights activists; and the National Lawyers Guild (NLG), which provided essential legal services for SNCC people arrested on dubious charges.

SNCC was one of the few civil rights organizations to adopt a freedom of association position. This was certainly in large part due to movement elders, like Anne Braden and Ella Baker, whose gentle prodding and support helped the young activists push back against the anti-communist atmosphere of the 1960s. 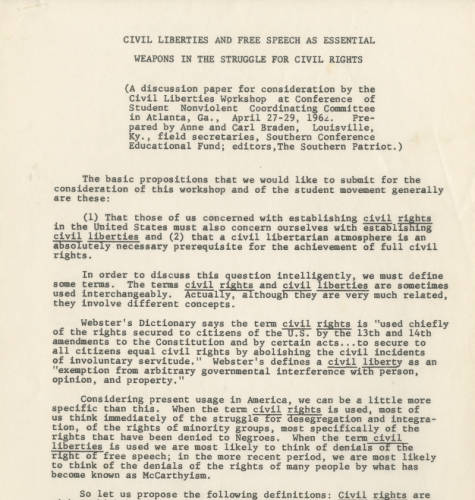 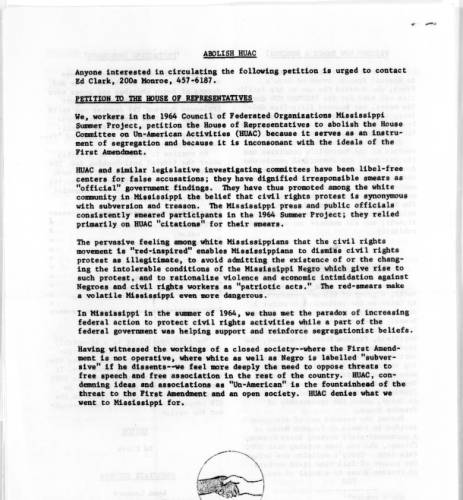