The need for legal aid in the South was critical and self-evident. In Mississippi alone, only three of the 2,100 lawyers in the state were Black and only they, along with one white lawyer–Bill Higgs from Greenville–were willing to take on the white power establishment. The American Bar Association had failed to intervene in southern states, and the NAACP Legal Defense Fund (LDF) was reluctant to take aggressive legal action when it came to sit-ins and other forms of direct action. And for its part, when it came to direct action, the Kennedy Administration and its Justice Department was hostile. With regard to protection against white violence, it was reluctant to offer any to the Movement.

In 1962, two Black lawyers from Virginia, Ed Dawley and Len Holt, appealed to the National Lawyers Guild (NLG) for help at its convention in Detroit. Holt delivered an impassioned speech, recounting his experiences providing legal counsel for demonstrators facing relentless unconstitutional attacks from the police forces of local governments and the Klan. He asked the room full of lawyers to stand up, link arms, and join him in singing “We Shall Overcome.” At the end of the convention, the predominantly white Guild voted to form the Committee for the Assistance of Southern Lawyers (CASL). At a time when many other legal organizations remained afraid or unwilling to take action, the Guild’s support to the Movement would prove invaluable.

Founded in 1937, the Guild was the nation’s first racially-integrated bar association. The organization had a strong commitment to defending vulnerable groups, but their reputation had been severely weakened during the red-baiting of the McCarthy Era. Between 1946 and 1959, the Guild lost more than half of its membership. Their decision to fight for racial equality in the South would ultimately reinvigorate the progressive group.

SNCC was eager to accept legal support from the Guild. In a letter to Ernest Goodman, leader of the Detroit Guild chapter, SNCC field secretary Dion Diamond wrote, “with the exception of the metropolises, Negro attorneys do not exist… In the smaller communities, the majority of the attorneys who are at hand refuse to accept cases involving civil rights.” Julian Bond also wrote to Goodman from Atlanta. “We really need about 300 Len Holts,” Bond noted, “but lacking this, we greatly appreciate you and your assistance.”

SNCC’s warm receptivity to the Guild’s willingness to provide legal assistance was not widely shared. First there was the inevitable assault from the white establishment; incessant violence and surveillance from state and local governments, county sheriffs, and local police forces. And even purportedly mainstream progressive forces–fearing the Guild’s “Red” ties–attempted to thwart the Guild’s efforts, often to the detriment of communities needing their legal assistance. During Freedom Summer in 1964, Jack Greenberg, Thurgood Marshall’s successor as the director of the Legal Defense Fund, threatened “to pull out of Mississippi” and never again represent any SNCC activist if the Guild continued to advise and help SNCC with their summer project. Despite ultimatums like these, SNCC remained committed to freedom of association. “We would take help from anyone,” James Forman later noted. “No one who gave us help had the right to dictate our policies. There could be no strings attached.”

While activists waged direct action campaigns to challenge existing laws, Guild attorneys remained on the ground to get arrestees released from jail as quickly as possible. Often their legal support took unconventional forms like seeking out witnesses on the front porches of shacks. After the disappearance of three Freedom Summer volunteers, Guild attorneys were able to track down families who had witnessed the police pull over the infamous blue station wagon belonging to Andrew Goodman, James Chaney, and Michael Schwerner.

The Guild’s role in the South paralleled the community-oriented empowerment that guided SNCC. “The Lawyers Guild simply lived up to its commitment to represent us as best as it could on our recommendation,” remembered Lawrence Guyot. “It never encouraged a litigation that we did not encourage or did not want to participate in. It never advocated any ideas independent of what we were advocating.” 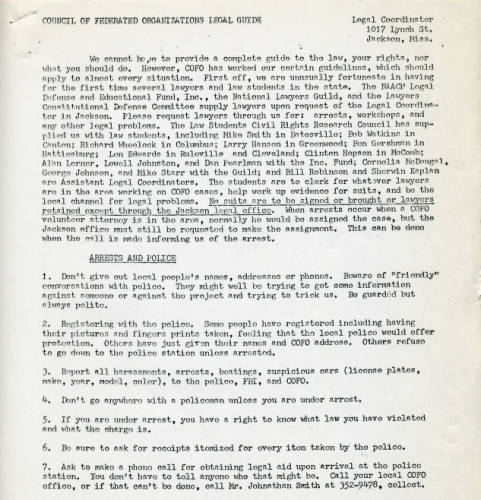 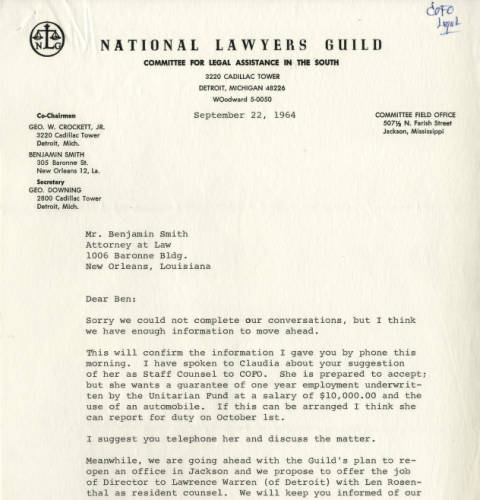 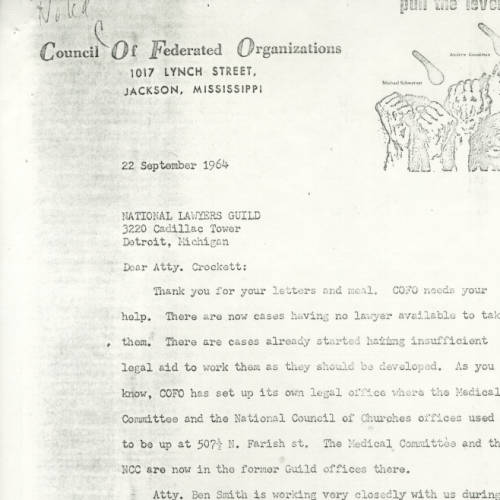 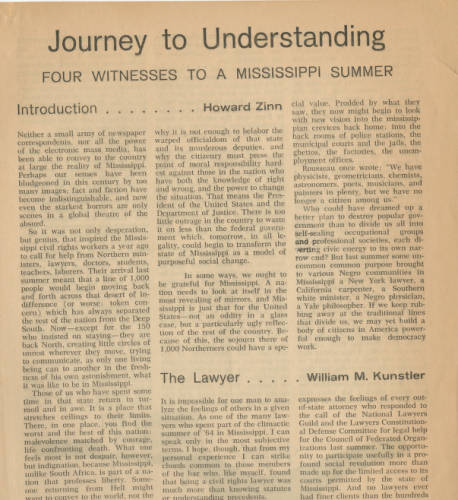 Click Here to View Document Update on the focus of the Lawyers Guild in Mississippi, COFO News Notes, May 1965, crmvet.org