When the the Young Communist Party, or Kosomol, of the Soviet Union, invited SNCC to send four representatives visit the Soviet Union in 1966, the Coordinating Committee voted to accept the invitation. Those interested in the trip were to send their names to the Atlanta office. The names were then put in a box from which four were chosen at random. Those ultimately assigned to the “American-Soviet Friendship Committee” were Fay Bellamy, Muriel Tillinghast, Dwight Williams, and Vernon Crutchfield.

Red-baiting was still alive and well in the sixties, and SNCC had a history of coming under attack for its associations. With the atmosphere around the Cold War and anti-communist sentiments strong in the U.S., SNCC’s decision to accept an invitation from the Young Communist Party was bold. But SNCC considered engagement with varied perspectives necessary and was increasingly encouraging involvement on the international stage as a valuable way to help inform work at home.

SNCC’s internationalism grew throughout the organization’s existence. In the fall of 1964, Harry Belafonte organized the visit of a SNCC delegation to Guinea. The following year, Bob and Dona Moses attended the Organization of African Unity (OAU)’s annual conference as representatives of SNCC. In 1967, SNCC would create an international bureau, and as SNCC began reaching out internationally, it decided it was important to try to implement an orientation sessions to prepare for travel. It was important that SNCC representatives to be able to provide coherent analysis of the Movement and of SNCC itself.

“Since we have been in the Soviet Union, we’ve been spoon fed love, peace and friendship, but I’m not naive enough to believe everything I’m fed is good for me,” wrote Fay Bellamy in an August 1966 report about the trip. “It is very interesting being in the Soviet Union, but they lie just about as much as our government. At least in the states, I know many of the issues and when someone lies, I can call a spade a spade.”

Spending about three days in each city, the SNCC group traveled from Moscow to Alma-Ata to Banku to Leningrad to Kiev to Riga and back to Moscow. They met with top leaders of the Kosomol and visited universities, preschools, and primary schools, traveling entirely in government-owned vehicles and staying in pre-fabricated student hostels. There, they learned about the education system, labor practices, and the restoration of Soviet cities. As time passed, however, some things didn’t quite sit well with the SNCC group: “All students hostels and hotels have a radio by which music and other programs are piped into rooms. The only control on this radio is the volume and the on and off knobs,” remembered Bellamy. “We asked if there were any revolutionaries in the USSR. We were told, ‘No.’”

While in the Soviet Union, the group also met many African students who had come there to study. When they first landed, they were greeted by a young man from Mali. Bellamy recalled, “He said, Brother or sister as he shook each of our hands…To feel the closeness of that handshake was worth the distance I had come.” Some of the students began opening up about their experiences, not all of it positive: The summer before the SNCC delegates arrived about 49 students ran away to other countries. Tension between the SNCC guests and members of the Young Communist Party, grew. Some of African students and the non-members of the Young Communist Party that the group met were visibly uncomfortable with the presence of the Party interpreters.

Reflecting on their experience in the United States in contrast with the Soviet Union, Bellamy wrote, “I can never remember being called an American before I came to the USSR….It would be funny if it were not so sad.” 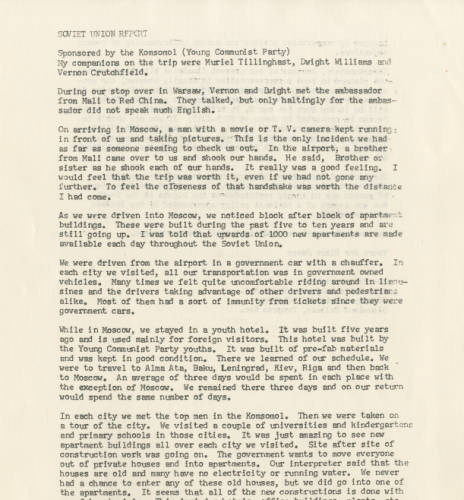 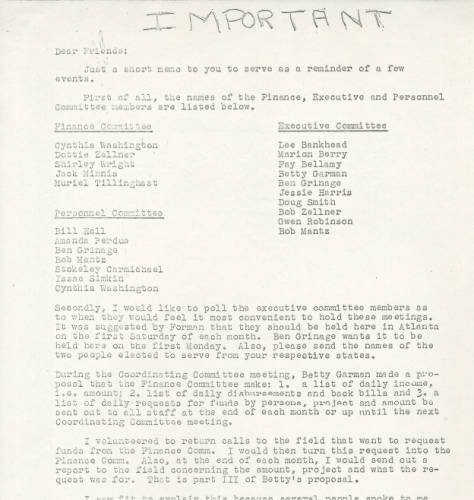