By the summer of 1967, SNCC had dedicated itself to not only strengthening Black political and economic independence but also to the liberation of all oppressed peoples. The core of SNCC’s organizing had always been the development of indigenous leadership, and the organization began to reach out to other movements of color to offer solidarity, experience, and supplies.

Julian Bond, SNCC’s communication director, had been helping put together a large conference on Labor Day weekend that would bring over 3,000 delegates from 200 organizations to Chicago’s Palmer House Hotel. This National Conference for New Politics (NCNP) hoped to build racially diverse coalitions in response to U.S. foreign and domestic policy. Among the participating delegates, there was one man in particular who had caught SNCC’s eye: Reies Tijerina, who had been leading the land-grant movement in northern New Mexico.

“We don’t even know if the man speaks English, and we want him to feel comfortable. Would you come?” Julian Bond asked Maria Varela. Varela, who was a SNCC worker in Mississippi at the time, was well-positioned to be SNCC’s point-of-contact for Tijerina and the Alianza Federal de Mercedes. She was one of two Latinas in the organization and had experience synthesizing knowledge across state and ethnic lines. She had worked with George Ballis in California to create a filmstrip showing how local leaders organized the National Farm Workers Association, which she brought to the Mississippi Delta to show plantation workers who were interested in organizing a union. She also documented the work of empowered communities in Mississippi, who were organizing their own elections, creating farmers’ cooperatives, and assuming leadership.

Varela agreed to come to the conference and meet with Tijerina because she was tired of “piecemeal solutions to economic inequality.” Varela had seen how the ownership of land had affected the way in which people organized and defended themselves, especially the landowning Black farmers in Holmes County, Mississippi and Lowndes County, Alabama. Tijerina’s call for the restoration of lands that had been taken from Mexican families in violation of the 1848 Treaty of Guadalupe Hidalgo struck a chord with Varela, who felt “that owning land was a key requirement for defeating poverty, taking control of community, and reclaiming culture.”

Tijerina, known as “King Tiger” and the “Malcolm X of the Chicano Movement,” was also looking for ways to connect with Black organizations. He wanted to unite minorities in combating the white power structure. “This urge, this growth, for unity of la Raza with the Negro cannot be resisted… It will come because it must,” said Tijerina, “The black man has his cause and we have ours. It is the same cause—justice.” Impressed with SNCC, and Varela especially, he invited the organization to send a delegation to the Convención Nacional de la Alianza Federal de los Pueblos Libres, a coalition-building summit in Albuquerque, New Mexico that fall. 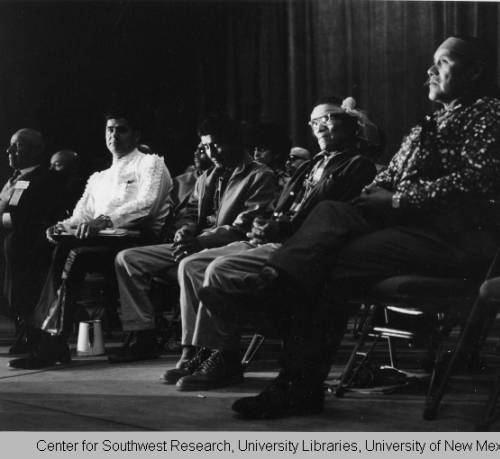 This newfound relationship with Tijerína ignited something in Varela. For her, understanding Black Power and what it meant to the different communities that SNCC worked with had helped fortify her appreciation of her Mexican American identity. By late 1967, she could see her time in Mississippi coming to an end: funding was limited, SNCC was grappling with some internal conflicts, and morale in the field was worn down. Varela received an invitation from Tijerína to join his work with the land-grant movement, and by 1968 she had moved to New Mexico.

James Forman, The Making of Black Revolutionaries (Seattle: The University of Washington Press, 1985).

Click Here to View Document Speech delivered by James Forman to the Black caucus of the NCNP, September 2, 1967, crmvet.org 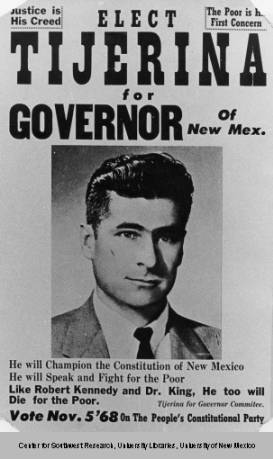 Click Here to View Document
“End of the Trial,” The Movement, February 1969, crmvet.org