As the Cold War intensified in the 1950s, the United States government used anti-communism to undermine progressive struggles for social change, including the anti-colonial and anti-imperial alliance between Africans and Black Americans. Black activism on international political issues was often deemed anti-American, and the civil rights establishment, once actively anti-colonial but under siege from McCarthyism, quieted its voice during much of the 1950s.

However, an undercurrent of news from Africa, most often conveyed by Black newspapers, made its across the Atlantic, inspiring a new generation of Black activists coming of age in the late fifties and early sixties. The Algerian War for Independence, the Mau Mau revolt in Kenya, and the independence of Ghana all made a deep impression on Black high school and college students who were beginning to challenge segregation in the Jim Crow South.

In 1960, as young Black people across the South engaged in sit-in demonstrations at segregated restaurants and other public facilities, 17 African nations gained their independence. When the sit-inners convened in Raleigh, North Carolina, to form the Student Nonviolent Coordinating Committee (SNCC), they noted their affiliation with these newly-independent countries. “We identify ourselves with the African struggle,” read SNCC’s founding statement, “as a concern for all mankind.” The organization’s following conference in Atlanta featured Antioch College student Alphonse Okuku, the brother of Kenyan labor leader Tom Mboya, as a speaker. He also joined SNCC protests on Route 40.

As SNCC grew, so did the organization’s connection with the world-wide struggle for freedom and justice. The organization was an incubator for thoughts and ideas. SNCC’s slogan, “One Man One Vote” was borrowed from the Zambian independence movement. Books and other publications from Third World struggles circulated. “Everyone in their hip pocket carried Fanon around,” remembered Karen Edmonds (Spellman). “We’d always have hardbacks, and we’d exchange them with each other after we read them and we’d sit down at night and talk about what the meaning was.”

These informal conversations and study sessions gave SNCC members a broad sense of the world, but it was their experiences in the field that allowed them to link their struggle for civil rights with the global struggle for human rights. Beginning in 1961, SNCC organizers engaged in voter registration drives in the Deep South, which brought them face-to-face with the political and economic structures that maintained Black second-class citizenship. Questions arose as SNCC workers were being beaten and jailed, and local people were being evicted and occasionally killed. “Is it really worth it?” asked Charlie Cobb. “If they actually get the vote, what will it mean to them? Is what we are about, making blacks Democrats or Republicans, is that really freedom, is that liberation?”

This line of questioning, especially after the 1964 Mississippi Freedom Democratic Party (MFDP) challenge at the Democratic National Convention in Atlantic City, pushed many SNCC workers away from a narrow version of civil rights. They began to see their struggle as one for liberation and independent institution building. And they looked to the Third World for inspiration and solidarity.

In 1964 and 1965, several SNCC staff traveled to the African continent. In 1965, Bob and Dona Moses represented the organization at the annual meeting of the Organization of African Unity (OAU), an organization of independent African nations.

SNCC also ramped up its support for freedom struggles in Southern Africa. The organization protested at the South African consulate in New York against the country’s oppressive apartheid regime–one that mirrored the Jim Crow system that SNCC fought in the United States. “There is no difference between the sting of being called a ‘kaffir’ in South Africa and a ‘nigger’ in the U.S.A.,” noted a SNCC position paper. “The cells of Robben Island and Birmingham Jail look the same on the inside.”

In 1967, SNCC declared itself a human rights organization and encouraged and supported “the liberation struggles against colonialism, racism and economic exploitation.” SNCC also created an international bureau headed up Jim Forman, SNCC’s former executive secretary who in the late 1950s had begun a program of African studies as a graduate student at Boston University.

SNCC’s internationalism outlasted its formal life and continued into the 1970s. Many former SNCC organizers, among them Bob Moses and Charlie Cobb lived and worked in Africa. From 1969 until his death in 1998, Stokely Carmichael lived in the west African nation of Guinea as leader of the Pan Africanist All-African People’s Revolutionary Party. Courtland Cox and other SNCC veterans helped organize the Sixth Pan African Conference in 1974.

Cleveland Sellers with Robert Terrell, The River of No Return: The Autobiography of a Black Militant and the Life and Death of SNCC (Jackson and London: University Press of Mississippi, 1990). 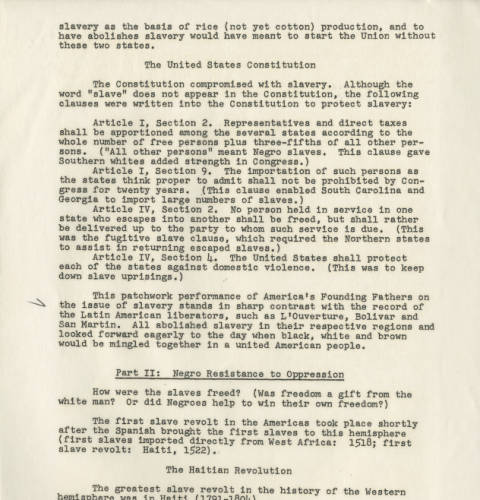 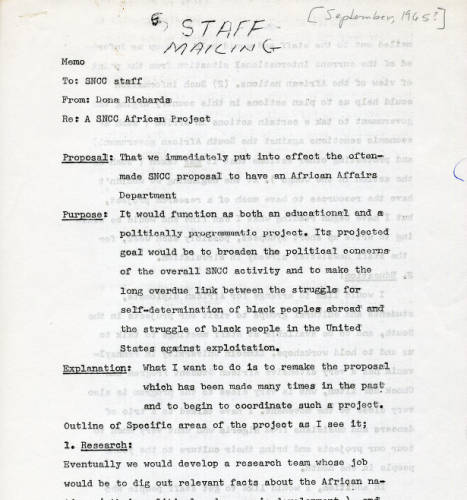 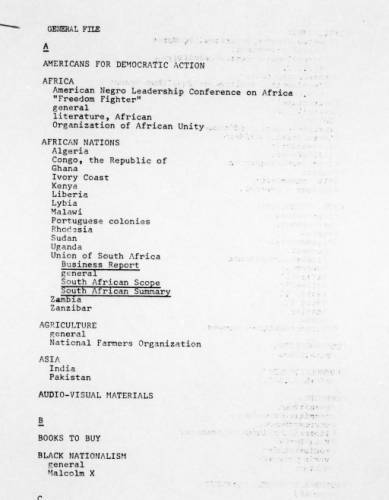