The auditorium at the Western College for Women, packed with hundreds of summer volunteers, remained mostly quiet as the CBS documentary, Mississippi and the Fifteenth Amendment, played. Then the film focused on burly, racist Theron Lynd, a registrar from Forrest County, Mississippi who had not registered a black man until a federal injunction the previous year. Snickers erupted at the stereotypical image. 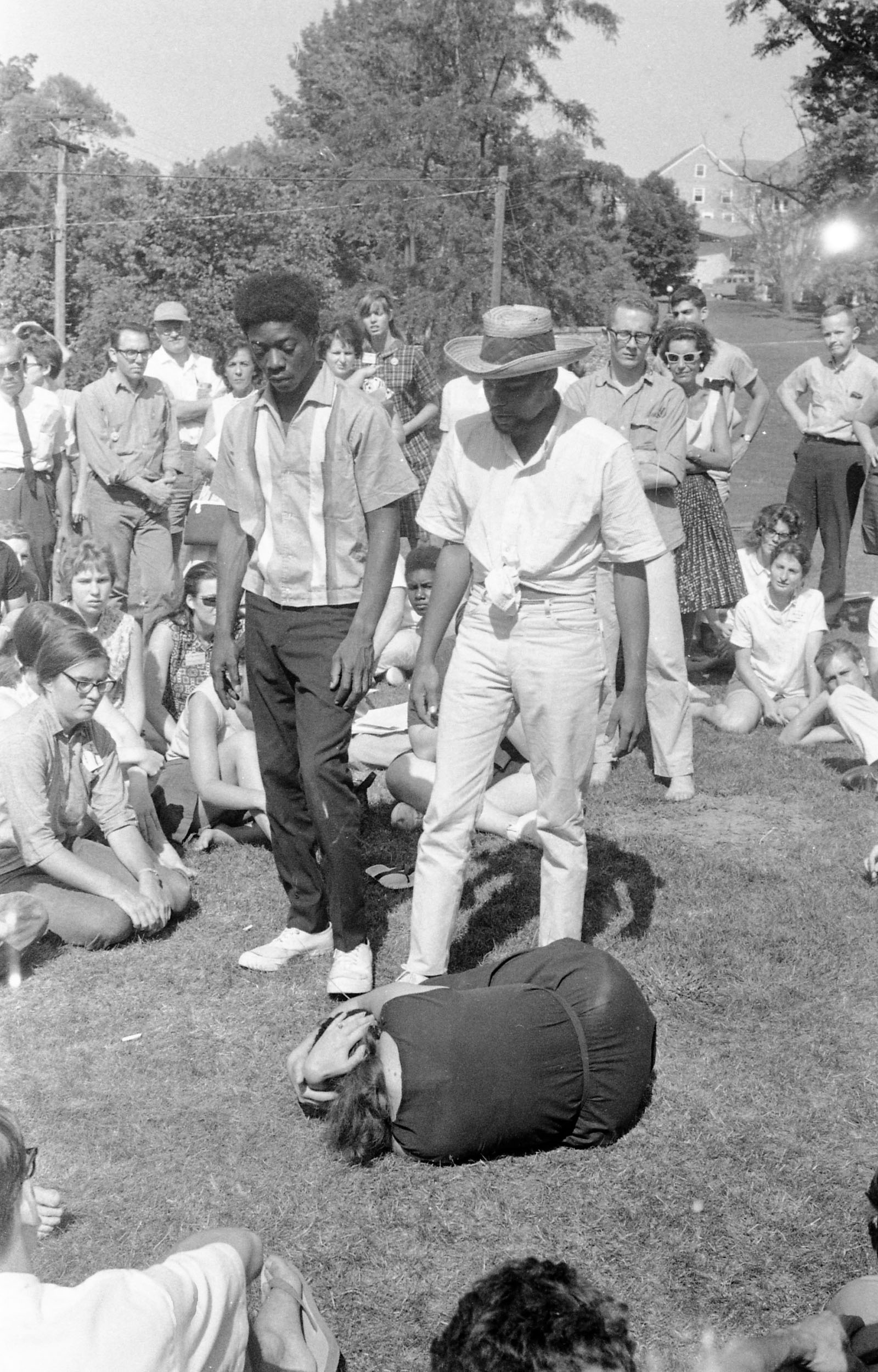 SNCC field staff stormed onto the stage. “You should be ashamed,” one veteran staffer chided the crowd. “We know that bastard.” Far from a comical stereotype, people like Lynd were one part of oppressive and violent system that these 250 volunteers would be confronting in less than six days. Stone-faced and grim, SNCC staff wondered how these naïve volunteers could ever understand such a place.

“We have to know you. We have to love you. But we don’t understand you,” some SNCC staff told the volunteers. The first of many dialogues that would transpire throughout coming week, the conversation continuing into the early hours of the morning.

The orientation, which began on June 13, spanned the course of two weeks. Volunteers attended small group workshops and general assemblies about Mississippi geography and the history of slavery in America. They were taught how to travel safely after dark.

Almost 90 percent of the nearly one thousand volunteers who went to Mississippi that summer were white. Most volunteers, in their early twenties, had been recruited from elite universities across the nation. 123 students came from Harvard alone. Other volunteers heard about the project through Friends of SNCC in the North, local CORE chapters, or NAACP youth groups. Roughly 100 ministers and 150 lawyers and law students also volunteered.

During the orientation, project organizers from SNCC and CORE hoped to confront any youthful idealism volunteers may have carried with them and tell the truth about Mississippi. “If you don’t get scared, pack up and get the hell out of here because we don’t need any people who don’t know what they’re doing.”

The racial bias of the nation was not lost upon volunteers, who understood that the government would continue to disregard the situation in the South unless white bodies were at risk. “This is part of what we are doing… getting the county involved through yourselves,” project director Bob Moses told volunteers. Indeed, throughout the orientation the media had focused almost exclusively on white volunteers, ignoring the presence of other black volunteers and the predominantly black leadership of the project. 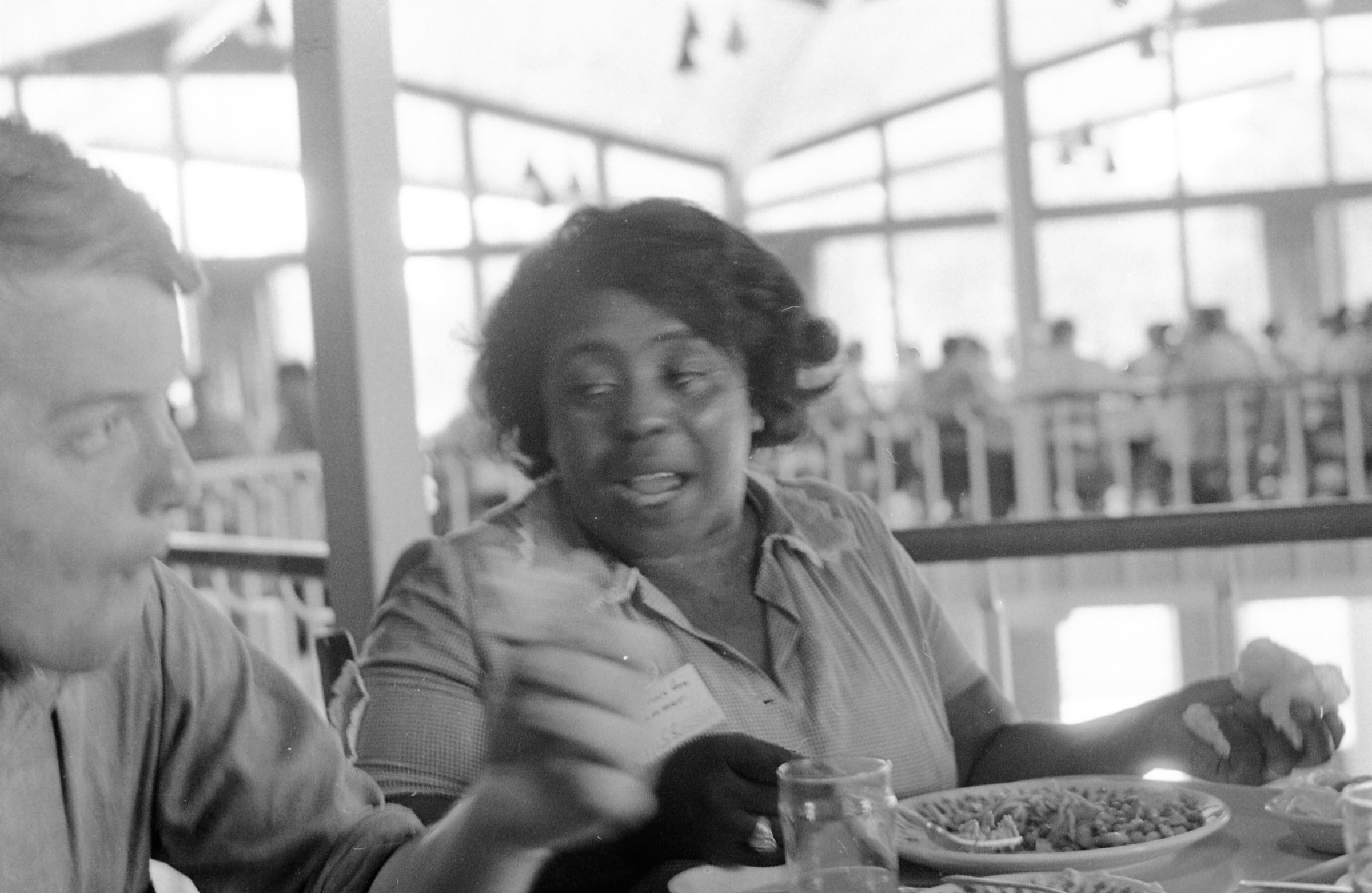 The theme of violence dominated these sessions. SNCC and CORE staff shared stories of beatings in jail, some rolling up their shirts and pants to reveal bullet holes and bruises. James Lawson led workshops on nonviolence resistance where volunteers learned to fall and roll into balls as mock-mobs shouting “Nigger!” and “Commie bastard!” knocked them to the ground. “Your legs, your thighs, your buttocks, your kidneys, your back can take a kick or a billy club,” they learned. “Your head can’t. Your neck can’t.”

John Doar, Assistant Attorney General for Civil Rights, made an appearance as the first week of orientation came to an end. Increasingly aware of the potential violence that awaited them in Mississippi, one volunteer asked what role the federal government would have in protecting their lives. His response suggested that there would be none. The imminent danger of the 10-week summer project had sobered most volunteers, but few stayed home.

As the first group of volunteers boarded buses for Mississippi, hundreds of new volunteers arrived in Oxford for a final round of orientation. But unlike the laughter that had been invoked by the sight of Theron Lynd the previous week, these next volunteers would spend the beginning of their orientation grappling with the news that three civil rights workers were missing and presumed dead.

Charles Payne, I’ve Got the Light of Freedom: The Organizing Tradition and the Mississippi Freedom Struggle (Berkeley: University of California Press, 1995), 300-16.

Bruce Watson, Freedom Summer: The Savage Season That Made Mississippi Burn and Made America a Democracy (New York: Penguin Group, 2010), 15-19, 29-32. 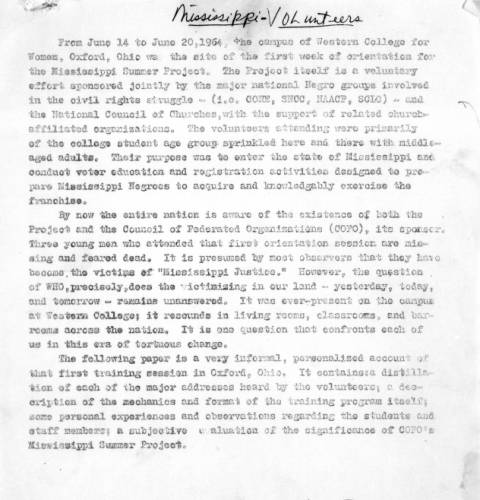 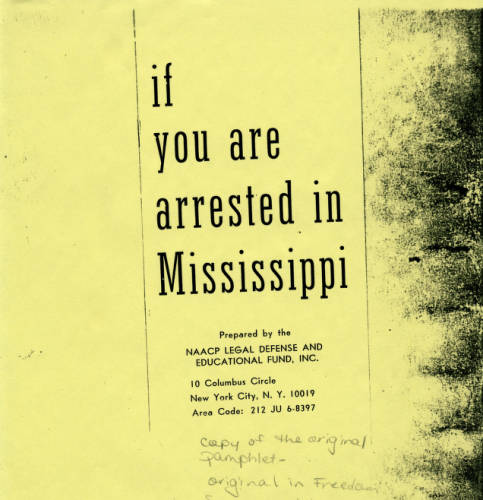 “If You Are Arrested in Mississippi,” pamphlet, 1964, Jerry Tecklin Papers, WHS 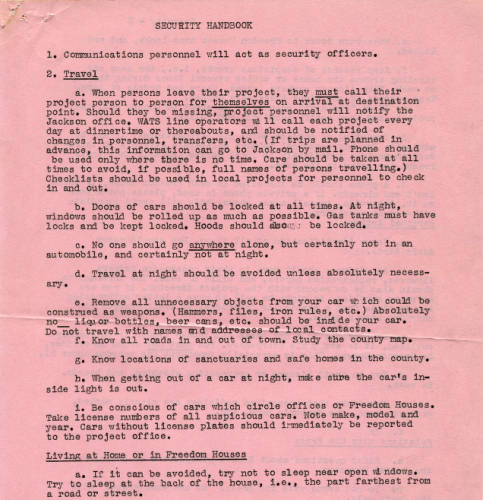 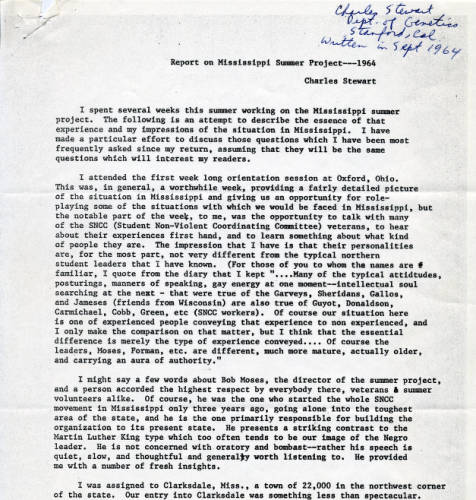