A little-known dimension of SNCC was its brief stab, via COFO, at organizing in the white community. The organization’s leadership had long seen the need to combat the racism and hatred that gripped poor white communities, often at the expense of their best interests, but had not found a way to address the problem.

But in the summer in 1964, a small group of whites, some of whom were Freedom Summer volunteers, some from the newly-formed Southern Student Organizing Committee (SSOC), launched a tiny, pilot project in Biloxi, Mississippi–the “White Folks Project”–with the dream of an “interracial movement of the poor…” one of the organizers, Bruce Maxwell, wrote.

Project organizers wanted to bring poor whites into the Movement or at least limit local hostility to it. The project directors were Sam Shirah from Alabama and Ed Hamlett, white southerners who had worked with SNCC and had seen their share of violence in southern white communities. Their team had, for the most part, grown up in the South. They had an understanding of white violence that many Freedom Summer volunteers had only read about.

In Mississippi, poor whites suffered extreme levels of poverty along with limited education and job opportunities. Upper class politicians failed to respond to their needs for educational opportunities, jobs, and health, and instead pitted them against Blacks in similar socioeconomic conditions to maintain their own supremacy. COFO organizers recognized the power that an alliance between Blacks and poor whites could have though they knew that the work would be incredibly dangerous.

In June of 1964, 18 mostly southern, white volunteers arrived in Biloxi on the Gulf Coast at nightfall. They rolled up to the rundown Riviera (pronounced Ruhveeruh) hotel and rented rooms that would become their offices, meeting space, and living quarters for the summer. COFO leaders chose Biloxi in part because of its tourism industry. It was far from sympathetic to the Movement, but town leaders didn’t want reports of violence toward outside white students to keep business away. The volunteers counted on the pressure from local businesses to keep the Klan at bay.

Still, the volunteers were met with hostility and threats by local whites. When two civil rights workers gave a $100 deposit for a small rental house, they discovered the owner had changed the locks on them. He thought they were Freedom Riders (which they weren’t), and refused to give back the deposit. When one started to threaten the owner with the Movement’s civil rights lawyers, the owner pulled a revolver from his desk and brought it within a foot of his head. “Get the hell out of here you nigger-lover. I don’t ever want to see you again.” They decided to stay squeezed in the Riviera as long as the hotel owner would let them But as organizer Ed Hamlett put it, many local whites “who realize what needs to be done fear to act; others are angry with outsider agitators; others have been duped by the power structure.”

Some project workers left in frustration, but the project persevered. Several more experienced SNCC organizers came to Biloxi, and they began canvassing in integrated pairs, urging poor whites to join the Mississippi Freedom Democratic Party. They spoke about common issues facing Blacks and poor whites–lack of jobs, poor education and living conditions. They convinced twenty local whites to register with the MFDP after just two weeks of canvassing.

Nonetheless, the project was unable to gain traction enough to sustain its work; they were especially vulnerable to rumors that they were organizing preferential treatment for Blacks. In many ways, however, the White Folks Project exposed the difficult realities of working for change in white communities. Both SNCC and CORE continued to pioneer in this effort The next year, COFO started the Ozark, Arkansas white folks project where organizers wrote, “The solution can come only by community work (black and white together), Federal aid, and — most importantly — equal rights for Negroes.”

“We Must Be Allies… Race Has Led Us Both To Poverty,” 1964, Civil Rights Movement Veterans Website. 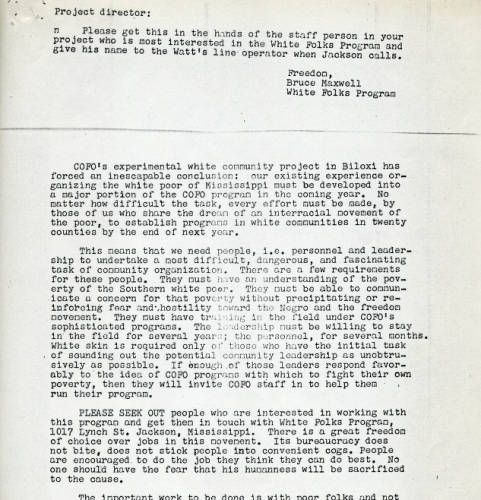 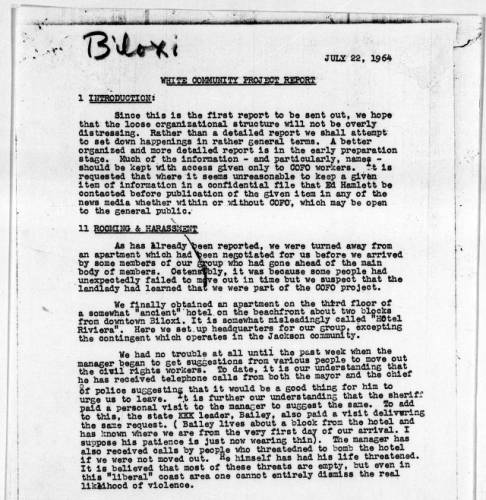 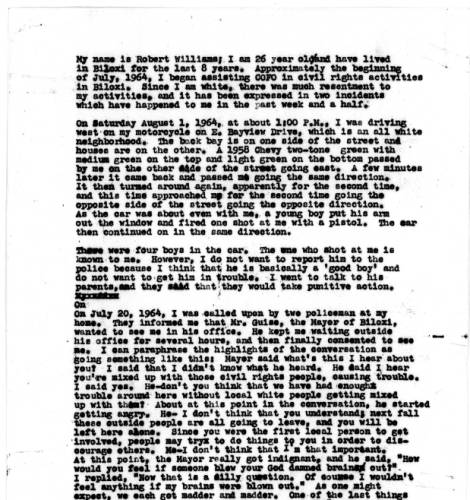 Click here to view document
Anne Braden, “Those Who Were Not There: The Cold War Against the Civil Rights Movement,” Fellowship, 1989, crmvet.org