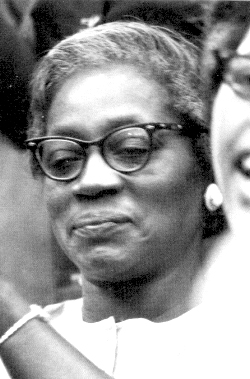 Victoria Gray, a fellow representative of the Mississippi Freedom Democratic Party, described Annie Bell Robinson Devine as “a behind the scenes giant, a god-sent giant who came and dwelt and worked on the back roads in the rural places.” Mrs. Devine was born in Mobile, Alabama and raised in Canton, Mississippi. After graduating from Tougaloo College, she began working as an insurance agent; later, she became a schoolteacher.

When CORE workers began a voter registration project in Canton, Mrs. Devine quickly joined the effort. She was on her way from work when she heard singing coming from C.O. Chinn’s motel on Franklin Street. Police officers were driving back and forth outside. “I decided to go in the building to see what was going on,” remembered Mrs. Devine. Inside, CORE’s George Raymond and Dave Dennis “were talking about voter registration and civil rights.” At the time–1963–Canton had no registered Black voters, even though 75 percent of its residents were African American.

Mrs. Devine continued to attend mass meetings and workshops in Canton. After being harassed by police officers for attending a meeting, she quit her job to work for the Movement full-time. “The next morning, instead of going on my daily work, I decided to start canvassing for people, finding people to join in workshops and help getting people registered to vote.” Mrs. Devine was bold about her commitment, announcing to her church, “You don’t have to whisper about me, I’m in it. I’m in the Movement.”

By late 1963, Mrs. Devine was running the movement office in Canton. All civil rights projects in Mississippi were organized under the Council of Federated Organizations (COFO), an umbrella organization for all civil rights groups active in the state. On February 28, 1964, she organized Canton’s first Freedom Day to protest the unwillingness of the local registrar to register Black people to vote. “We had tried for months and months to get people registered,” Mrs. Devine remembered, “and had not been successful.” The registrar used the literacy test and the requirement that the Mississippi Constitution be interpreted to the satisfaction of a registrar as a device to bar eligible Black adults from registering to vote.

A photograph of MFDP delegates on the Convention floor in Atlantic City, Annie Devine is in the center, Aug. 10, 1964, George Ballis, Take Stock

In the summer of 1964, Mrs. Devine worked alongside fellow activists like Fannie Lou Hamer and Victoria Gray to found the Mississippi Freedom Democratic Party (MFDP). She worked diligently to build the party in the Canton area, attending the precinct and county meetings. At the statewide convention in Jackson, she was elected to the MFDP’s 68-person delegation that went to Atlantic City to challenge the regular Mississippi Democratic Party at the National Convention.

The Convention Challenge, as it became known, failed when the National Democratic Party refused to seat the MFDP delegation. While the defeat was disappointing, the Mississippi activists knew that they couldn’t give up the fight. In the winter of 1964-1965, Mrs. Devine helped lead a challenge to unseat Mississippi Congressmen. As one of the first three Black women to stand on the floor of the House of Representative in Washington, she demanded that the House deny membership to the representatives-elect because African Americans were still denied the right to vote. Her efforts led to Congressional investigations of Mississippi voting practices. Later, she helped found the Child Development Group of Mississippi (CDGM) and continued to work full time helping register Black Mississippians to vote. 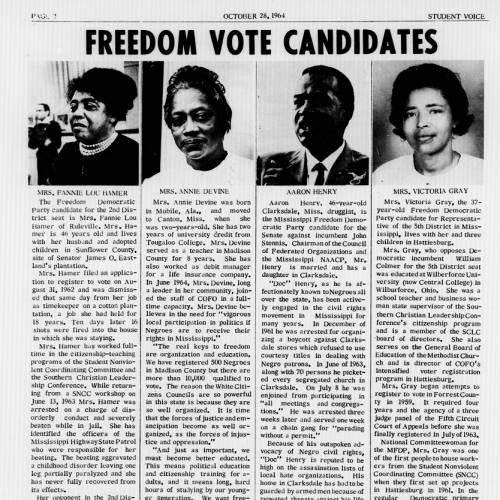