Bertha Gober was active in SNCC early in its history when one of its priorities was direct action against segregation. Her poignant and powerful song, “We’ll Never Turn Back,” written after the murder of Herbert Lee in Mississippi, can be called SNCC’s anthem. Journalist John Poppy, stunned by the power of her voice, called it “part lament, part prayer, part battle cry.”

Gober was drawn into the Movement as a student at Albany State College, first as part of the NAACP Youth Council, and then with SNCC in the fall of 1961. Cordell Reagon and Charles Sherrod had visited campus to recruit students to work with SNCC. While scrutinizing college officials monitored the organizers’ moves on campus, Gober and her fellow students did not let the disapproval of university administrators stop them from allying with SNCC.

Gober was attracted to direct action protests right away. On November 22, after three high school students were arrested for refusing to leave the “white” dining room at the Trailways bus station, Gober and another Albany State student, Blanton Hall, returned and were arrested. She was nineteen-years-old. 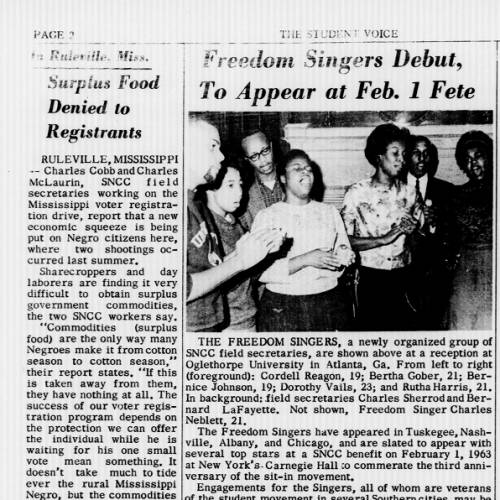 Gober and Hall refused bail and were expelled from Albany State. Students marched on the home of the school’s president in protest. Just three days after her arrest, a mass meeting was held at Mount Zion Baptist Church. There, Bertha Gober, just released, gave powerful testimony of her experience in jail. Even decades later, people recalled how powerful her speech was. Inspired by the stories shared at the mass meeting, a number of Albany State students went from dormitory to dormitory to organize other students that very night to hold a protest march on city hall the following morning.

Almost two weeks later, Gober joined several hundred young and elderly citizens on a march down Jackson Street. Police tried to break up the march and arrested her and other demonstrators. Gober was back in the same overcrowded jail with its water fountains right over the toilet seats. The infested mattresses had been removed, leaving only metal bunks. Because it had been raining, people were growing sick. When Janie Culbreth wrote lyrics to the tune of “Rockin’ Jerusalem,” Bertha Gober sang to the police chief and the mayor, “Oh Pritchett, Oh Kelley/open them cells…I hear God’s children/praying in jail/Freedom, Freedom, Freedom”. Other people leaped in with a chorus that resounded throughout the jail.

After her direct action work, Gober went on to use her voice for the Movement as a Freedom Singer, along with Cordell Reagon, Bernice Johnson, Charles Neblett, Bernard Lafayette, and Dorothy Vallis. The Freedom Singers helped raise money for the Movement at events across the country but also inspired SNCC people to carry on. “You see why this is a singing Movement,” Jim Forman said, after Bertha shared a song of her own for a journalist. “The songs help. Without them, it would be ugly. Ugly.”

Annette Jones White, “Finding Form for the Expression of my Discontent,” Hands on the Freedom Plow: Personal Accounts by Women in SNCC, edited by Faith Holsaert, et al. (Urbana: University of Illinois Press, 2010), 100-119. 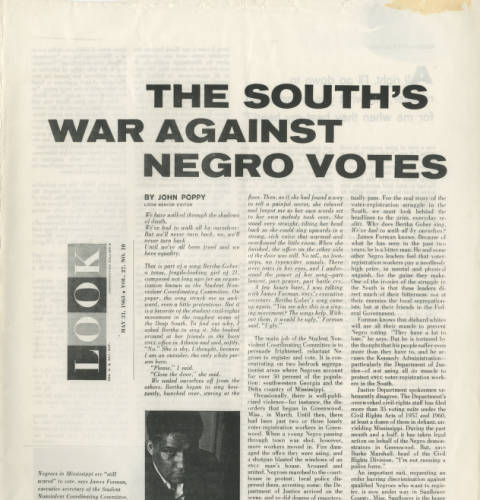 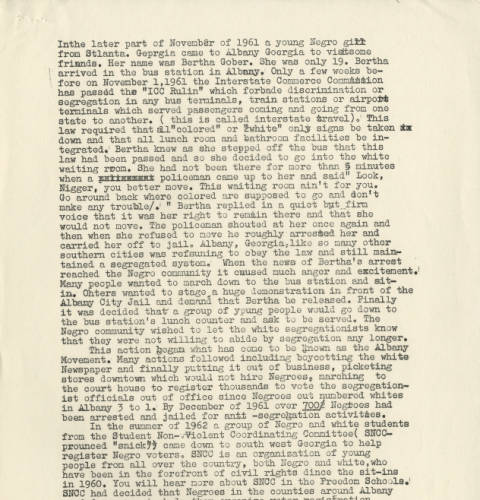