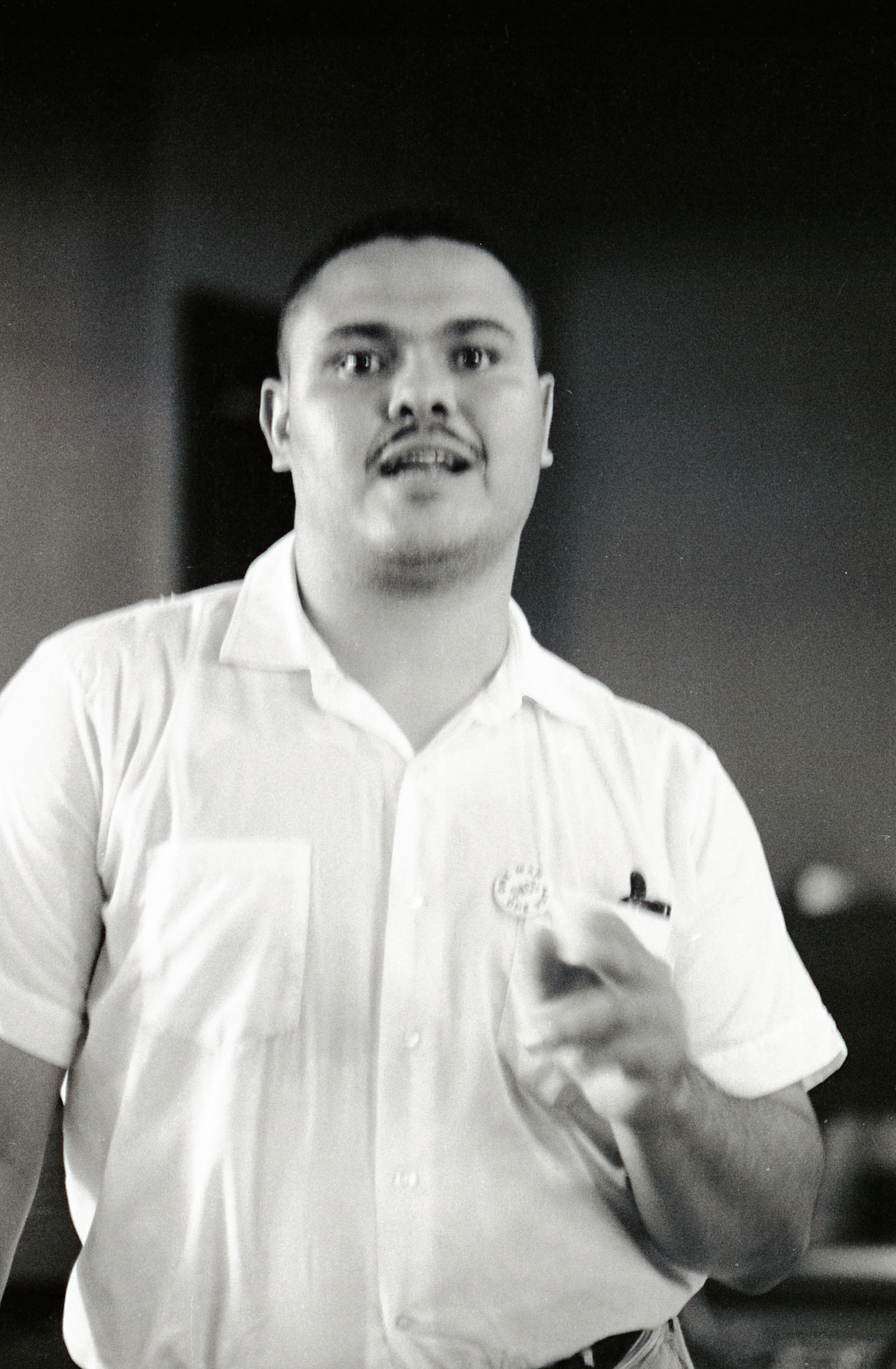 Lawrence Guyot was an unlikely candidate for movement leadership. It was not until hearing Medgar Evers of the NAACP speak in 1957 in his hometown, the small coastal town of Pass Christian, Mississippi that he realized for the first time that Pass Christian was the “most non-Mississippi part of Mississippi” thanks to the large presence of the Catholic Church and labor unions. “I could use any restaurant I wanted,” recalled Guyot. “I could go into any drug store I wanted. I could ride the bus anywhere.” He even used to use white restrooms–an act that could’ve gotten him killed in another part of the state. As he listened to Evers describe the racial violence and voter suppression that occurred in the rest of Mississippi, Guyot vowed to help out in any way that he could.

Shortly after hearing Ever’s speech, Guyot packed his bags and moved to Jackson, Mississippi, to attend Tougaloo College. The school had a number of “freedom-oriented and well-educated” faculty members who supported student empowerment. Tougaloo was also one of the very few Black schools in the South that permitted student activism. According to Guyot, A.A. Branch, a Dean at the school, “took the position that any Tougaloo student could demonstrate in anything having to do with empowerment, education; but they had to take their books with them when they went to jail because you’d be graded like every other student.”

Guyot soon joined a group of young activists, including Joyce and Dorie Ladner, who introduced him to SNCC. Before long, he was a fixture at SNCC’s Freedom House on 714 Rose Street where he met Bob Moses, Marion Barry, Diane Nash, and other SNCC leaders. Although interested in the organization’s voter registration work, he didn’t think that people who were illiterate should be allowed to vote. He changed his mind after only two weeks with SNCC, rejecting the idea of the literacy test as a qualification for voting.

Guyot was strong person, whose convictions matched his imposing size. He never shied away from expressing himself if he thought it was good for the Movement. In 1962, Charlie Cobb stopped in Jackson on his way to Houston, Texas for a civil rights workshop for student sit-in protesters. When he stopped by the Freedom House, Guyot challenged him to stay and work in Mississippi. “Civil rights workshop in Texas!” he exclaimed. “What’s the point of doing that when you’re standing right here in Mississippi?” Cobb stayed in Mississippi for the next five years working on Black voter registration.

In the early sixties, Guyot served as a field secretary for SNCC and traveled around Mississippi working on voter registration. He worked on SNCC projects in the Delta, where among the many people he worked closely with was Mrs. Fannie Lou Hamer. In 1963, after Mrs. Hamer and several other civil rights activists, including SCLC‘s Annell Ponder and 15-year-old June Johnson, were arrested and viciously beaten in Winona, Mississippi, he went to Winona to post bail for the group. Instead, the local police threw him in a jail cell and beat him. He was released after the assassination of Medgar Evers. The murder of the man who introduced him the Movement stunned Guyot and deepened his commitment to the struggle. 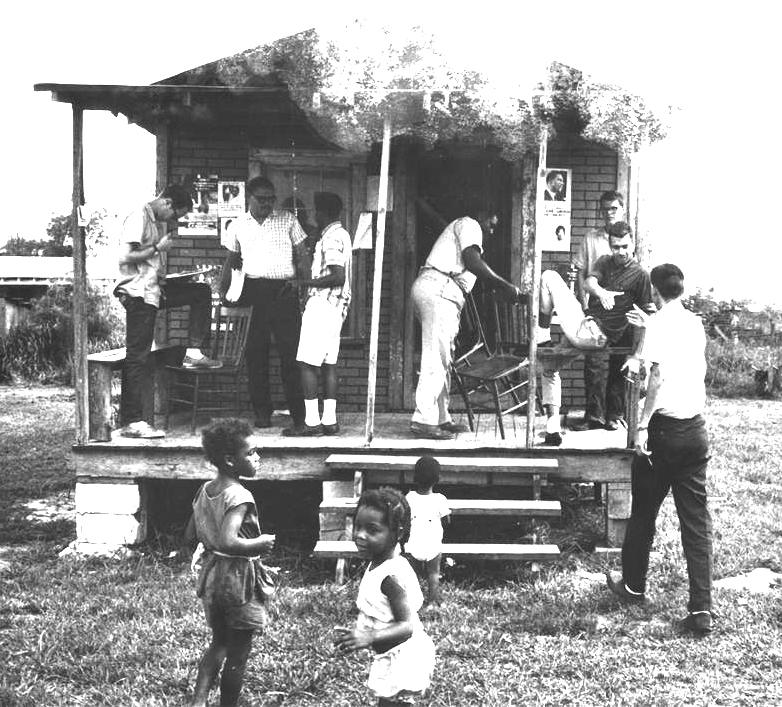 Lawrence Guyot at the Freedom House in Gulfport, Mississippi, crmvet.org

After Winona, Guyot became SNCC’s project director in Hattiesburg. He built the local Movement, church by church, staying after every Sunday service to reach out to potential voters. He helped organize Hattiesburg’s Freedom Day on January 21, 1964. Working with the National Council of Churches, Guyot invited religious leaders from around the country to Hattiesburg to protest the county’s refusal to register Black voters. Hundreds of people lined up in front of the courthouse, demanding the right to vote. The Freedom Day was first interracial protest in Mississippi that didn’t end in mass arrests and it led the way into the 1964 Summer Project, or “Freedom Summer.”

Guyot remained active full-time in the Movement throughout the sixties. He became chairman of the Mississippi Freedom Democratic Party, which challenged the regular Mississippi Democratic Party for its seats at the National Party Convention in Atlantic City in 1964. Reflecting on his movement activism, Guyot explained, “I consider myself very fortunate. I was born in the right town; I get to go to the right college. Then I run into SNCC [and] I come from a family that understands.” 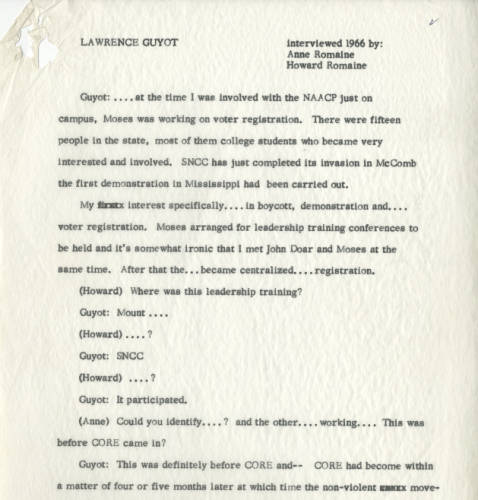 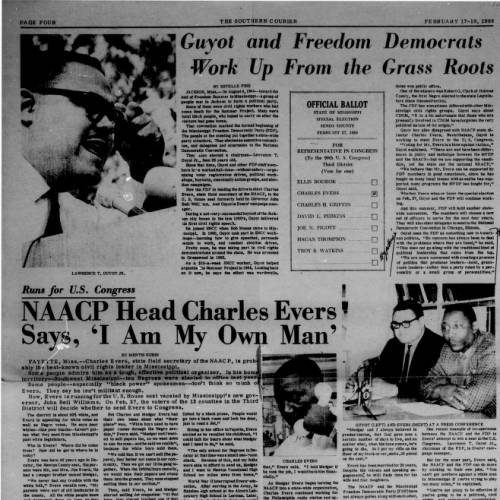 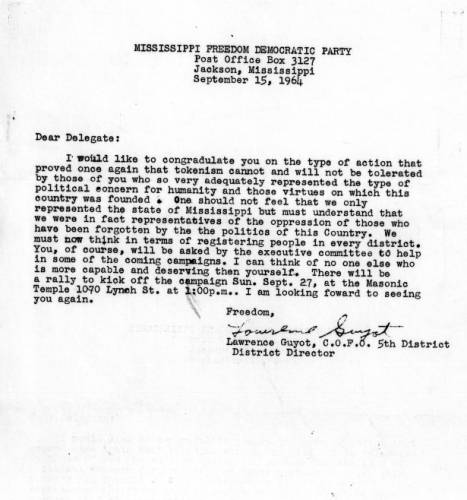 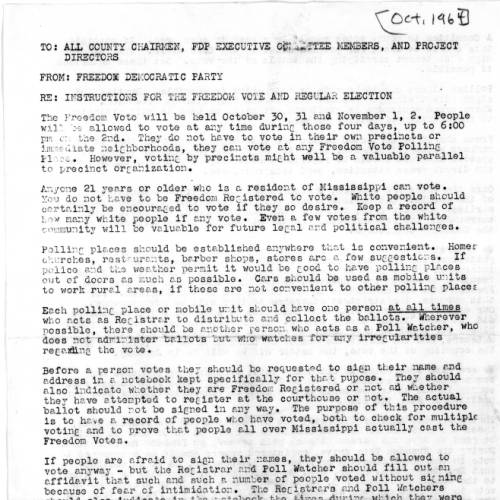