Home » Inside SNCC » The Story of SNCC » Challenging White Power

One result of SNCC’s work in Mississippi was the revitalization of the Council of Federated Organizations (COFO). It had been organized in 1961 to assist released Freedom Riders, but on the initiative of NAACP state president Aaron Henry, in the fall of 1962, it took on the mission of coordinating voter registration activities in Mississippi. Henry became president; Bob Moses COFO program director; and David Dennis of CORE, which had begun organizing in central Mississippi, assistant program director. SNCC and CORE field secretaries became COFO staff.

In both Southwest Georgia and Mississippi, SNCC organizers were now successfully digging into an increasing number of communities. While the number of those attempting voter registration remained small, new leaders, many of them women – like Fannie Lou Hamer of Sunflower County, Mississippi and Carolyn Daniels of Terrell County, Georgia – also emerged. So, too, did violence and other reprisals. Still, the federal government provided little help. In April 1963, for example, in Greenwood, Mississippi, where COFO was making its largest effort, the government withdrew its request for an injunction ordering county authorities to stop interfering with Black voter registration attempts.

More than any single thing, reprisals on every level kept Black people from trying to register to vote. To go to county courthouses and attempt to register was to enter the heartland of hostile white power. Whites argued that the low numbers proved that Blacks were not interested in voting. To refute this, COFO workers launched a “freedom registration” in Mississippi’s Black communities. Some 80,000 Black people registered. A “Freedom Vote” followed that fall, offering as candidates, Aaron Henry as Governor and Tougaloo College Chaplain Edwin King, a white native of Natchez, Mississippi, as Lt. Governor.

In April 1964, COFO workers organized the Mississippi Freedom Democratic Party (MFDP) and decided to challenge the legitimacy of the all-white “regular” state party. Key to getting the party and the challenge off the ground was the presence during the summer of 1964 of nearly a thousand out-of-state mostly student volunteers. What has become known as the 1964 Freedom Summer was violent and bloody. Eighty of the volunteers were attacked and beaten; 37 churches bombed or burned; another 30 Black homes and businesses bombed or burned; three COFO workers, Michael Schwerner and James Chaney of CORE and Andrew Goodman, a summer volunteer working with them, were killed. During the search for their bodies, the unidentified bodies of five Black men were pulled from Mississippi rivers. Scores of the volunteers and COFO organizers were arrested and beaten. The state blamed the Movement, claiming the voter registration activities had caused the violent white reactions.

In August, an MFDP delegation went to the Democratic Party national convention in Atlantic City, New Jersey, to challenge the legitimacy and seating of the all-white Mississippi delegation there. Although there was sympathy for the plight of Black Mississippians, they were not seated. President Lyndon Johnson did not want to challenge the Dixiecrat wing of the party, and threatened those in the party who did. Dixiecrat power triumphed. 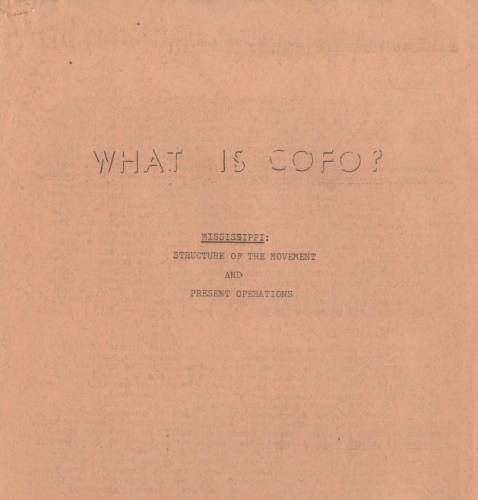 "What is COFO? Mississippi: The Structure of the Movement and Present Operations," undated, Robert Beech Papers, WHS