When a group of young people in Virginia began talking among themselves about how they could best organize in their state, they called SNCC. They had been following Freedom Summer and “decided we didn’t need to go to Mississippi to find work that needed doing,” remembered Ben Montgomery, one of the young organizers. With the help of SNCC Campus Traveler, Stanley Leroy Wise, they steeped themselves in SNCC’s organizing philosophy, doing research, talking to local people, and strategizing about how they could “find out what people want and need an help them organize themselves.” The Virginia Students Civil Rights Committee (VSCRC) was later deemed the Campus Travelers’ “greatest success.”

Wise, a North Carolina native, was first introduced to SNCC while he was a student at Howard University in D.C. He joined the campus organization Nonviolent Action Group (NAG), a SNCC affiliate. NAG had become involved with the Cambridge Nonviolent Action Committee (CNAC) led by Gloria Richardson on Maryland’s Eastern Shore, and Wise became involved with the Movement there in 1964. His classmate, Stokely Carmichael, remembered the Cambridge campaign as an opportunity “to experience a protracted campaign and the emotional satisfaction of working with a strong, spirited community of black people.” Soon after, Wise went south to work in the Mississippi Delta during Freedom Summer.

Carmichael and Wise remained close, and in June 1966 shortly after Carmichael’s election to chairman of SNCC, and while visiting SNCC projects across the South, word reached the two of them and Cleveland Sellers that James Meredith, had been shot during a solitary “March Against Fear” from Memphis to Jackson. SNCC saw responding to the shooting as an organizing opportunity and thought that a continued march should be organized by local people and be about local issues. “So, bro, you expect any problems?” Wise asked Carmichael. “Stanley always was a worrier,” Carmichael later wrote.

Stanley Wise played an important role in SNCC’s shift towards Black political and economic independence. H. Rap Brown remembered, “Wise was truly a wild blood.” He encouraged the organization to fundraise in the Black community and divest from the interests and dependency upon white money. Wise was tasked with finding repositories at HBCUs for SNCC’s records and photo files, and he was on SNCC’s overseas trips committee as the organization was connecting with a network of liberation movements across the globe. He proposed more speaking engagements in the Black community, sending press releases to Black publications, and strengthening the organization’s understanding of Pan-Africanism. And so, during the next round of elections for SNCC’s executive positions in 1967, Wise was seen as a good fit for executive secretary. H. Rap Brown was elected chairman in this vote, and Ralph Featherstone was elected program secretary. “SNCC is moving from rhetoric to program,” said Brown, “We are going to build Freedom Organizations across the country…as a source of jobs, power and freedom.”

Wise continued to play an important role in SNCC as it underwent a reorganization in June 1968. He was elected as one of 12 deputy chairmen alongside George Ware, Johnny Wilson, Donald Stone, and Jim Forman. SNCC had it’s eyes on creating a national political party, developing liberation schools, and continuing anti-war anti-draft resistance.

“We are going to build,” The Movement, June 1967, Civil Rights Movement Veterans Website. 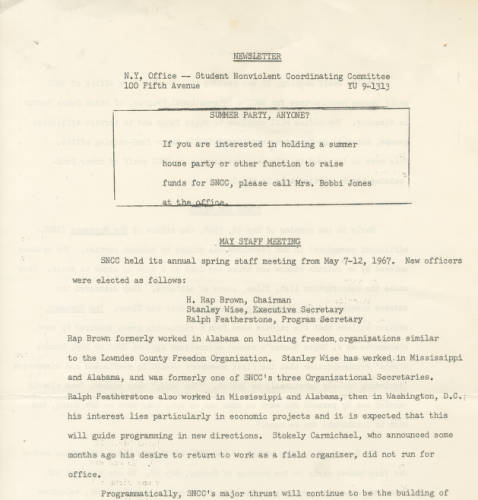 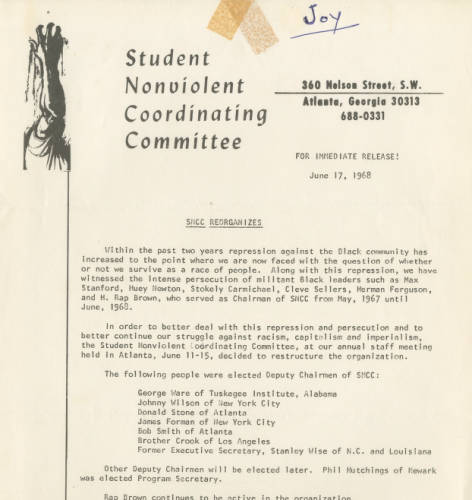