In jail after a demonstration, Wiley got word that a large number of students from Howard University were on their way to join the protests. As soon as the mayor heard about the students coming, he cleared out their cells and agreed to open the desegregated theater. That day taught Wiley about the power of numbers and began her journey into SNCC.

After earning her MA at the University of Michigan in Spring of 1964, Jean Wiley moved south to Alabama and began teaching in the English Department at Tuskegee Institute. “Alabama was about taking power in those counties where black people were the majority,” she remembered. Wiley began attending mass meetings and organizing students in Selma, Montgomery, and Macon County, Tuskegee’s home county.

As a young teacher, the education she sought for her students–including Sammy Younge–went beyond what was expected by the University. She fought to have progressive Black authors in the classroom, and wouldn’t quit when Tuskegee shut down her request to order Ralph Ellison’s Invisible Man. “I did get away with [James] Baldwin,” she recalled. “They didn’t want to have another fight on their hands.”

Her house became a crash pad for SNCC activists when they passed through town on the way to organizing projects. “It became like a way station. You know, you need to spend the night at Jean’s house and then keep going eastward.”

In the summer of 1965, she headed SNCC’s national communications during Julian Bond’s campaign for Georgia State Legislature. She had never given a live interview, written a news article, or called a TV station before, but like all young SNCC organizers and office staff, she learned on the job with the support of people around her. With the “expectation…that [she] would learn, and learn fast, just like everybody else,” Wiley became point person for the media, Friends of SNCC on northern campuses, and the Student Voice. “The strange thing is, everybody knew that I didn’t know what the hell I was doing!” she remembered.

Wiley often used the WATS (Wide Area Telephone Service) that summer, sending news about SNCC from across its southern projects. She covered voter registration tests in Sunflower County, demonstrations in Jackson, and boycotts in Americus, GA, and sometimes found herself under arrest along the way. Ruby Sales, her former student, kept her eyes on Wiley, who came to Fort Deposit in Lowndes County, Alabama to report on a SNCC demonstration in August 1965. She looked up to her and trusted that she would know what to do when a white mob wielding guns and baseball bats surrounded them. One man in the mob approached Wiley and threatened her life. She backed away, facing the mob, feeling if they shot her, “she didn’t want her parents or her family to think that she had been shot running.”

After two-and-a-half years in the Deep South, Wiley moved to Washington, D.C. and continued fighting for equitable and community-driven change. She built on what she learned at Tuskegee, and pushed forward a new perspective on Black education. Along with Geri Augusto, Charlie Cobb, and Jimmy Garrett, she conceptualized and taught at the Center for Black Education, part of a two-pronged project with Drum & Spear. Their approach to Black education broke broke from just confining learning to academic institutions and connected the campus to the community. Their question, as Cobb explained it, centered on “How do you use your education for the Black community?”

In SNCC, Wiley saw herself as “a committed and unrepentant progressive and activist.” “Yes,” she attested, “although we dressed in Sunday church clothes to confront racism and arrest, we were ready to kick a** – nonviolently, of course.”

Click here to view document
Jean Wiley, quoted in “How Did You Feel,” The Campus Digest (Tuskegee Institute), March 20, 1965, crmvet.org 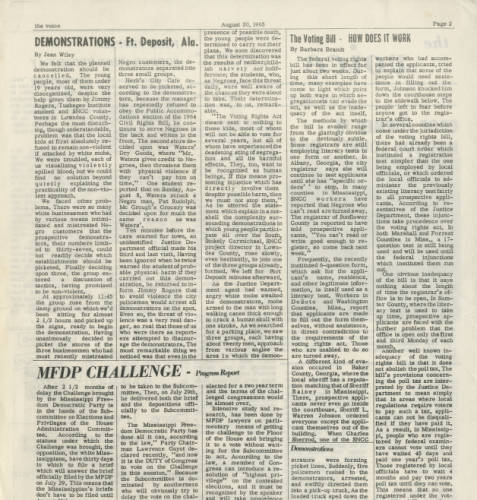