Batesville, Mississippi-native Juadine Henderson was just 15-years-old in 1963 when she went to Greenwood, Mississippi for a SNCC-led voter registration workshop. Before doing that she had first met SNCC field secretary Frank Smith in her hometown. “He’s a Freedom Rider,” explained her cousin, a student at nearby Rust College in Holly Springs where Smith was based. He had brought Frank home for Thanksgiving. A few months later, Smith came back to Batesville to see if Henderson and her friends wanted to come to Greenwood for a voter registration workshop. “I had no idea what a workshop was,” she recalled, but “if this has to do with the Freedom Rides, then I want to go because we have things to do in Batesville.”

After arriving in Greenwood, Henderson was struck by how young and engaged everyone in the SNCC office was. “Who are these people?” she thought. They looked at the world differently than other people she had encountered. “It made you think about what you were doing and what you were saying and why you believed what you were believing,” she recalled.

Medgar Evers was murdered on her first night in Greenwood, and the next morning, SNCC staffers tasked Henderson and her friends with passing out leaflets for a mass meeting. She didn’t know what a mass meeting was but was awed when more Black people than she had ever seen packed into the church that night. The singing and spirit amazed her. “There was no music, just freedom songs.” When they got back to Batesville, she and her friends bought the record album, “The Albany Movement,” to learn and practice the freedom songs they had sung in Greenwood.

The rest of the week’s workshop taught Henderson that if Black people had the right to vote they could change all kinds of things in their lives. After returning to Batesville she and her friends held voter registration meetings and canvassed neighborhoods. But they didn’t make much progress until white volunteers arrived in 1964 for Freedom Summer. All of a sudden, a line of Black people was waiting outside courthouse to register. “So you couldn’t go when we told you to go,” she thought, “but now that these white people…have come and said you should register to vote, you’re going up there.” She did not fight their involvement though. The white kids were going to go home, but she would still live there. She and her fellow high school students organized local sit-ins and were repeatedly arrested.

When she turned eighteen, Henderson decided to forgo college and devote herself to the Movement full-time. In 1965 farm workers in the Delta had gone on strike, refusing to work for thirty cents an hour. SNCC field secretary Curtis Hayes was putting together a group of Mississippi natives to work as community organizers, and Henderson went to the Delta town of Rosedale to work with the striking farm workers. It was tough work when people were struggling to simply feed their families. Like other SNCC organizers in the mid-1960s, she was realizing that Black Mississippians needed access to economic opportunities as well as political rights to make change in their life.

After leaving the Movement to enroll in college, Henderson came back to Batesville and half-heartedly started organizing with the SCLC’s Poor People’s Campaign. By that point, “I no longer believed that the whole system of government was going to change because three people in Mississippi are now voting,” she explained. “I didn’t think that the federal government was on our side anymore.” Her work with SCLC eventually brought her to Resurrection City in Washington, D.C. She felt like a hypocrite, staying in the clean hotel with SCLC staffers at night and handing out peanut butter and jelly sandwiches to poor people in muddy tents during the day.

One day, however she saw her SNCC friend Charlie Cobb standing on a Washington street corner. She jumped out of the car and gave him a hug, and he told her that other SNCC people were in town. He, Curtis Hayes, Judy Richardson, and others had opened the Drum & Spear Bookstore, while Frank Smith was working at the Institute for Policy Studies. Henderson started working with her former comrades while reading everything she could about Black nationalism and African Liberation.

In 1974 she left D.C. to participate in a summer program at Columbia University for minority journalists. She began working as a journalist and later became front page editor at USA Today. 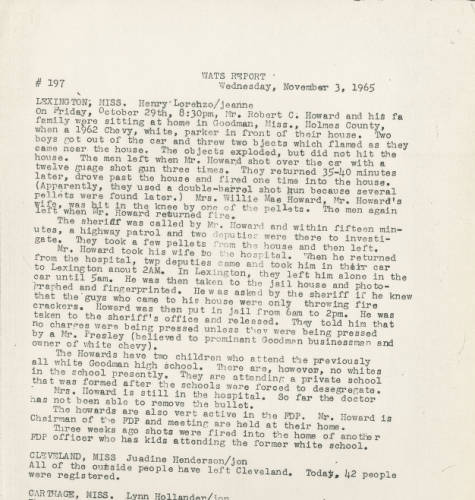 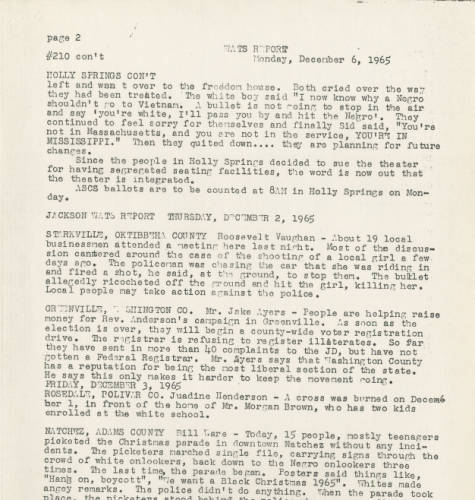