When attorney Joseph Rauh, an influential member of the Americans for Democratic Action (ADA), agreed to serve as the legal counsel for the Mississippi Freedom Democratic Party (MFDP), liberal politicians in Washington D.C. were quick to jump on the bandwagon. Up until this point, the liberal political establishment was lukewarm to the idea of the MFDP challenging the lily-white Mississippi delegation at the Democratic National Convention in 1964. But with Rauh on board, “we saw more doors beginning to open and the attitudes of among Democratic liberals began to change noticeably,” recalled SNCC’s Stokely Carmichael. By the time the MFDP began laying the groundwork for the convention challenge during Freedom Summer, liberal organizations, like ADA, pledged support for the upstart political party.

Throughout the Cold War, ADA represented traditional American political liberalism. Founded in 1947, it first flexed its political muscle in the 1948 presidential election by successfully maneuvering the Democratic Party to embrace a liberal stance on civil rights. Its efforts pushed President Truman to desegregate the armed forces and adopt other civil rights measures.

However, ADA’s stance on civil rights had as much to do with political expediency as it did to a firm moral commitment to Black Americans. The organization wanted to curb the growing influence of conservative southern politicians, known as Dixiecrats, within the Democratic Party, but Cold War politics led it away from active support for left-leaning civil rights organizations like the National Negro Congress. The ADA considered itself a watchdog against Communist influence among American liberals.

When SNCC bursted onto the political scene in 1960, the young, Black-led organization held an uneasy alliance with the nation’s liberal political establishment. SNCC’s first chairman, Marion Barry, chided both major political parties for their weak support of civil rights at their national conventions in 1960. A year later, the organization butted heads with the Kennedy administration over whether or not to continue the Freedom Rides. SNCC’s willingness to confront Jim Crow through nonviolent direct action eventually forced the Kennedy’s to form the Voter Education Project (VEP) with the hope that voter registration work would attract less attention than direct action. After much debate, SNCC began to organizing voter registration drives with VEP money in Mississippi, Georgia, Alabama, and Arkansas.

In Mississippi, SNCC’s voter registration drives were met with layers of repression, ranging from Klan violence to economic reprisal, and usually brought only silence from the Federal Government. In 1964, SNCC-COFO organized a parallel political structure–the Mississippi Freedom Democratic Party (MFDP), which planned to challenge Mississippi’s racist regular Democratic Party for its seats at the national party convention in Atlantic City that August. It enlisted the support of the ADA-dominated liberal wing of the party, which helped win early support for the effort from delegations from New York, California, Minnesota. The MFDP traveled to Atlantic City feeling that they might actually be seated.

However, as the convention got underway, liberal support withered. President Johnson, fearful of a southern walkout if the MFDP was seated, applied pressure on ADA leader and potential vice presidential nominee Hubert Humphrey to broker a compromise. With no discussion with the MFDP, a proposed compromise was announced by the then Minnesota Attorney General Walter Mondale. The MFDP was offered two at-large seats and a promise not to allow segregated delegations in the future–all while seating the regular Mississippi party delegation.

The compromise was rejected outright by the MFDP delegation, who felt betrayed by their liberal supporters. Great pressure from the Party’s liberal establishment was placed on the MFDP who stood firm. “We were challenging them to recognize the existence of a whole group of people — white and Black and disenfranchised — who form the underclass of this country,” explained Bob Moses, SNCC’s Mississippi project director. “However, the national Democratic Party and the institutions that surrounded it … rejected any extension of power into the hands of the Black and poor.”

As a result, SNCC began to doubt the efficacy of working within the established political system, and liberal leaders began to aggressively undermine SNCC.

Peter Kellog, “The Americans for Democratic Action and Civil Rights in 1948: Conscience in Politics or Politics in Conscience,” Midwest Quarterly (Fall 1978), 49-63. 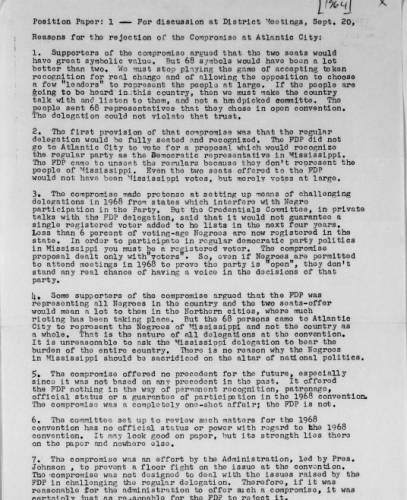 "Reasons for Rejection of the Compromise at Atlantic City," September 20, 1964, MFDP Records, WHS