A truck drove through a cotton field in Corcoran, California with a loudspeaker: “Stop working. You’re not making a living.” A nineteen-year-old farm worker, Cesar Chavez, along with thousands of others, left the field to gather and learn about La Causa, farm workers’ rights, and how to build a union. Chavez had found his calling. It was 1952. He began organizing campaigns against discrimination and directing voter registration drives. He knew he wanted farm workers be at the center of his work, however, and decided to form a new organization. Along with experienced union organizer Dolores Huerta, in 1962 Chavez formed the National Farm Workers Association (NFWA), which later became the United Farm Workers of America.

Union dues were hefty, $3.50 a month; a lot for underpaid farm workers struggling to make ends meet. But Chavez felt it helped each member feel that they were “an important part of the organization.” Union members and their families had access to funeral insurance and also belonged to a credit union that only charged one percent interest on loans. Eventually the union encompassed thousands of farm workers in multiple Valley counties. Under the black, red, and white flag of an Aztec eagle, they fought for just wages, medical protection, and adequate living conditions. 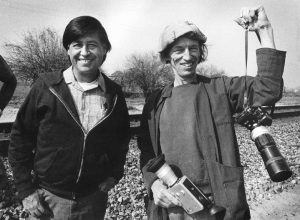 When the NFWA was founded, SNCC had just begun working in California. SNCC Chairman Chuck McDew came to the University of California’s Berkeley campus in July 1962, and he met Mike Miller, a recent graduate who had helped organize the Student Committee for Agricultural Labor two years prior. Impressed with his organizing abilities, McDew invited Miller to volunteer with SNCC, and by the fall, Miller was working with them full-time from the Bay Area.

When Miller helped bring the NFWA to SNCC’s attention, they were excited by what they saw. And as the relationship between the two organizations grew, SNCC sent the NFWA equipment and organizers to teach nonviolent resistance. Remembered farm worker Eliseo Medina, “I think SNCC people were the only ones that really had any kind of concept about what to do. Particularly in things like marches and demonstrations and all those tools of the Civil Rights movement, hell, we didn’t have a clue.” SNCC’s newspaper The Movement, published out of the Bay Area, began reprinting articles written in the NFWA’s bilingual periodical El Malcriado. By December 1965, both SNCC and CORE were coordinating a nationwide boycott of Delano grapes and Schenley products.

“The workers have been harassed by strikebreaking tactics reminiscent of the 1930s and with police oppression typical of Birmingham’s Bull Connor and Selma’s Jim Clark,” wrote Cynthia Washington in a memo to all Friends of SNCC chapters. This network of SNCC supporters, which came to be known as the Friends of SNCC Growers Groups, developed city-specific strategies to support the farm workers, sending food and supplies, fundraising, organizing pickets, researching, and creating educational material to get the word out about conditions of migrant laborers. Marshall Ganz, who had worked in McComb during the 1964 Freedom Summer, worked with the farm workers for 16 years; Dickie Flowers and photographer George Ballis and also went to work under the direction of the NFWA full-time as SNCC staff. 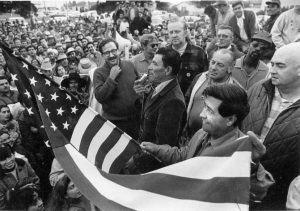 Using photographs taken by Ballis, SNCC staffer Maria Varela developed a three-part filmstrip, “Farm Worker’s Strike: The Union, The Strike, and The March,” which she disseminated all across the Deep South. It demonstrated how and why these farm workers organized and the ways in which they sustained their efforts against the oppressive forces working against them. When she showed it to a group of Black farm workers who had lost their jobs because of their involvement with the Movement, one responded, “You don’t know how it feels to know that we are not the only ones.”

SNCC saw the importance of standing in solidarity with their Mexican American comrades. “It is necessary that blacks and Mexicans see that there is only one cause–justice,” proclaimed Elizabeth “Betita” Martinez Sutherland, former director of the New York Friends of SNCC, in the spring of 1966 to a crowd of 10,000 farm workers. They had just made the 300-mile journey from Delano to Sacramento to protest against grape growers in Delano, “We are with you and we are proud of your march and your victory because it is a victory for all the poor of the world.”

Mike Miller, “The Farmworkers and Their Allies In the Early to Mid-1960s,” Farmworker Movement Documentation Project, University of California San Diego.

Click Here to View Document "Strike in the Grapes," The Movement, October 1965, crmvet.org