Medgar Evers met Eleanor Holmes at the airport when she arrived in Jackson, Mississippi, on June 12, 1963. She was still in law school at Yale University. Almost immediately, she remembered, “talking about the raw atmosphere of Mississippi” with Medgar and his wife Myrlie. Later Evers dropped Holmes off at the bus station and wished her luck as she headed to Greenwood to visit COFO’s voter registration project in that small Delta city. The next morning, Holmes learned that Evers had been shot in the back that night in his own driveway. His murder drove home realities of Mississippi for the Washington D.C. native: “[it] was a culture capable of killing black people.”

Holmes didn’t have long to reflect on Evers’s assassination. Around the same time, several COFO workers, including Mrs. Fannie Lou Hamer, were imprisoned and viciously beaten in Winona, a small town thirty miles east of Greenwood. SNCC’s Lawrence Guyot drove over to post bail and was also beaten and thrown in jail. Holmes, using her status as law student at Yale University, demanded that police chief in Greenwood call and ask about the prisoners in Winona. She traveled to Winona herself the next morning to make sure that they were alive. Finally, after two days, SCLC’s Andrew Young secured their release. Reflecting on her efforts, SNCC’s Dorie Ladner noted, “When people like Eleanor and others came, thank God, they helped open this beast up.” 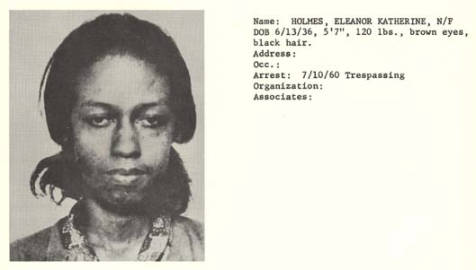 Eleanor Holmes was born and raised in Washington D.C. “My parents were always politically conscious and we had a very intellectually alive household,” she recalled. After graduating from Dunbar High School in 1955, she attended Antioch College in Ohio. Antioch pushed Holmes “toward my more radical self, the part that was already very skeptical about middle class values.” She headed up the college’s NAACP chapter and engaged in local civil rights demonstrations. During her sophomore year, Holmes decided to become a lawyer, largely inspired by “the ripening of my civil rights consciousness,” and in 1960 she was accepted into Yale Law School.

At the time, Holmes was one of only two Black women who had been admitted to Yale Law School (the other was Marian Wright). She embraced her outsider status and consistently stood against the grain of white and male dominated law profession. “I went to law school to be a civil rights lawyer,” she explained. All the while, she remained involved in local civil rights activities. She started the New Haven CORE chapter and organized picket lines in support of the sit-in demonstrations sweeping the South.

In the summer of 1964, Holmes volunteered as part of the legal counsel for the Mississippi Freedom Democratic Party (MFDP). The MFDP sought to challenge the racist lily-white Mississippi Democratic Party at the Democratic National Convention (DNC) that August. Holmes, Joseph Rauh, and Miles Jaffe meticulously crafted a legal brief that outlined the discriminatory practices of the Mississippi Democrats, who blocked Black political participation at every turn. Holmes lobbied hard for the MFDP at the national convention and was disappointed when the credentials committee only offered the MFDP two at-large seats. “We regarded the regular delegates as totally illegitimate,” she remembered. “We believed that we’d made the case they had kept blacks out … given the facts of the situations, it didn’t seem to use to be radical at all.”

Holmes moved to New York City in 1965 where she joined the staff of the American Civil Liberties Union (ACLU). Just two months later, she provided legal counsel for Julian Bond, who was denied his elected seat in the Georgia House of Representatives because of SNCC’s stance against the Vietnam War. In the 1970s, she began a long career in politics, serving as the head of New York City’s Human Rights Commission and became the first female chair of the Equal Employment Opportunity Commission under President Jimmy Carter. She continues to serve as Washington D.C.’s non-voting member in the House of Representatives.

Charles Payne, I’ve Got the Light of Freedom: The Organizing Tradition and the Mississippi Freedom Struggle (Berkeley: University of California Press, 1995), 51. 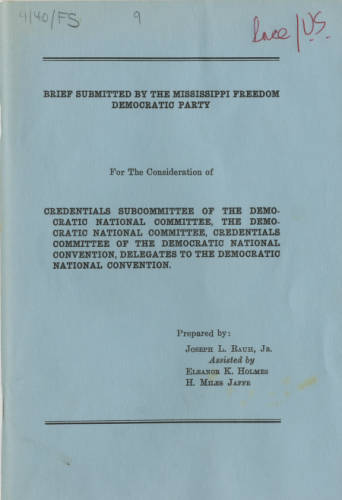 Brief Submitted by the MFDP for the Credentials Committee at the DNC, August 1964, MFDP Records, WHS 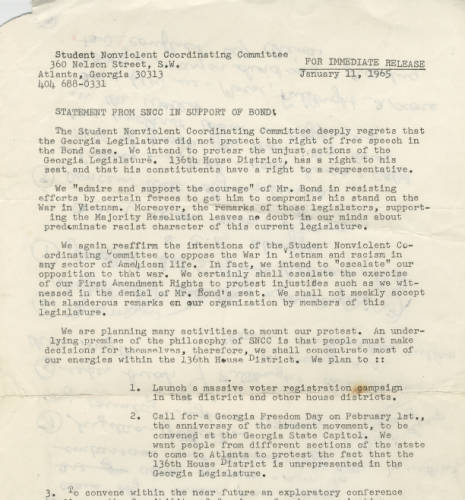